ANNA QUIGLEY – ON THE KOMONDOR, CORDS AND CLUBS 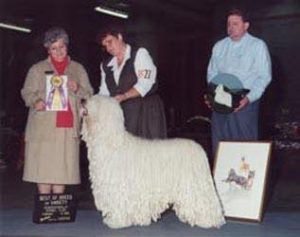 Anna Quigley is synonymous, for many in the purebred dog world, with a 110-pound, powerful, white mop. She bred, owned and handled the three-time national specialty winner, best in show winner, Westminster Kennel Club group winner that took the Komondor breed to new heights in the 1990s.

45 YEARS DEVOTED TO THE KOMONDOR

But it all started with a Rough Collie. She met her long-time breeding partner and friend, Patricia Turner, when Quigley brought her female to Turner’s stud dog to be bred. Indeed, Quigley housesat when Turner drove to California to bring home her first Komondor. Thus Bobo, and a long, successful family of robust, corded guardian dogs, entered Quigley’s life in 1973. Quigley, Turner and their extended families have been involved in the breed together for the duration of the intervening 45 years.

Quigley and Turner acquired a second Komondor from show photographer Ken O’Brien and their foundation bitch from Salt Lake City. Although Quigley noted the bitch wasn’t perfect, she had important breed qualities. They bought their foundation stud dog, Tiger, from Dottie Collier in 1976, having only ever communicated with Collier over the phone or by letter.

“There was room for people in the breed and we managed to become successful. The breed has been very good to us,” Quigley said.

Ch. Lajosmegyi Far and Away

Komonodorok are not a breed that will ever become popular, Quigley noted, primarily due to the coat and the intense work required to maintain it correctly. She said a fully coated Komondor requires anywhere from seven to 10 hours to dry. I have clear memories of watching Quigley leash walk the dogs at shows with their coats tied up and tube socks on their feet.

“Here in Western Washington, we have a lot of gravel area for the dogs because it’s so wet,” Quigley said. She added that the breed’s native Hungary and parts of Europe, where the dogs still serve their traditional roles as livestock guardians, are typically far drier climates.

The breed, like many in Europe, was nearly wiped out at the end of World War II, but Quigley noted the world wide estimated population in recent years has approached 10,000.

The breed was recognized by the AKC in 1932 and the Komondor Club of America worked proactively to expand the gene pool early on. 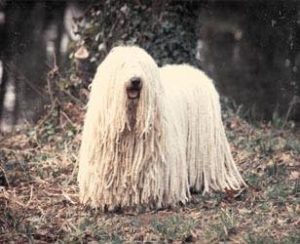 “Well, when we first joined the Komondor Club of America,” Quigley noted, “one of the requirements was that you could not breed any closer than three generations back. And that was to help expand the lines and create different lines.”

Quigley said it’s tough breeding a Komondor litter these days. The number of breeders, and consequently the number of dogs being exhibited, has decreased since its heyday in the late 20th century.

“… when we bought Tiger from Dottie, he was 10 months old,” Quigley said. “And he was out of an outside female and it was her puppy back. So, he was a little bit different pedigree than the rest of her litters. … often when he was used for stud, instead of taking a stud service, if the pedigree was right on the female, we would take a puppy back. …. my comment to Pat (while considering a particular stud dog) was we always agreed we’d breed to the devil if it could improve our line.”

Dahu, the dog who won the group at the garden under Irene Bivin, was originally placed in a home because Quigley and Turner didn’t want to keep another male at the time.

“We went down to see him and he was tied to a tree in the back yard,” Quigley said. “And very much willing to bite somebody. And the family really didn’t like him. So, he came back. And he just easily worked his way into our hearts and he was totally reliable with everybody in the family, but he knew how to bite. Which of course you don’t want a dog to figure out. But I went to a lot of work to open up my heart and my mind to suggestions on how to get this stopped and we did.”

Quigley and Turner would drive a couple hours each way to a handling class near Seattle to work with Dahu. “(the instructor) always tried to convince me… when he’d do the down and back, he would have a tendency to jump straight up in the air,” Quigley said. “And she said just ‘trust him to come down and be right.’ That night (in the group at Westminster Kennel Club) he jumped straight up in the air and I trusted him, and he came down in a perfect gait.”

I hope you enjoy this wonderful talk with one of the greats in our sport. Her knowledge, wisdom, humor and dedication are an inspiration.

And stick around for Allison Foley’s *excellent* advice on treating problem ears.