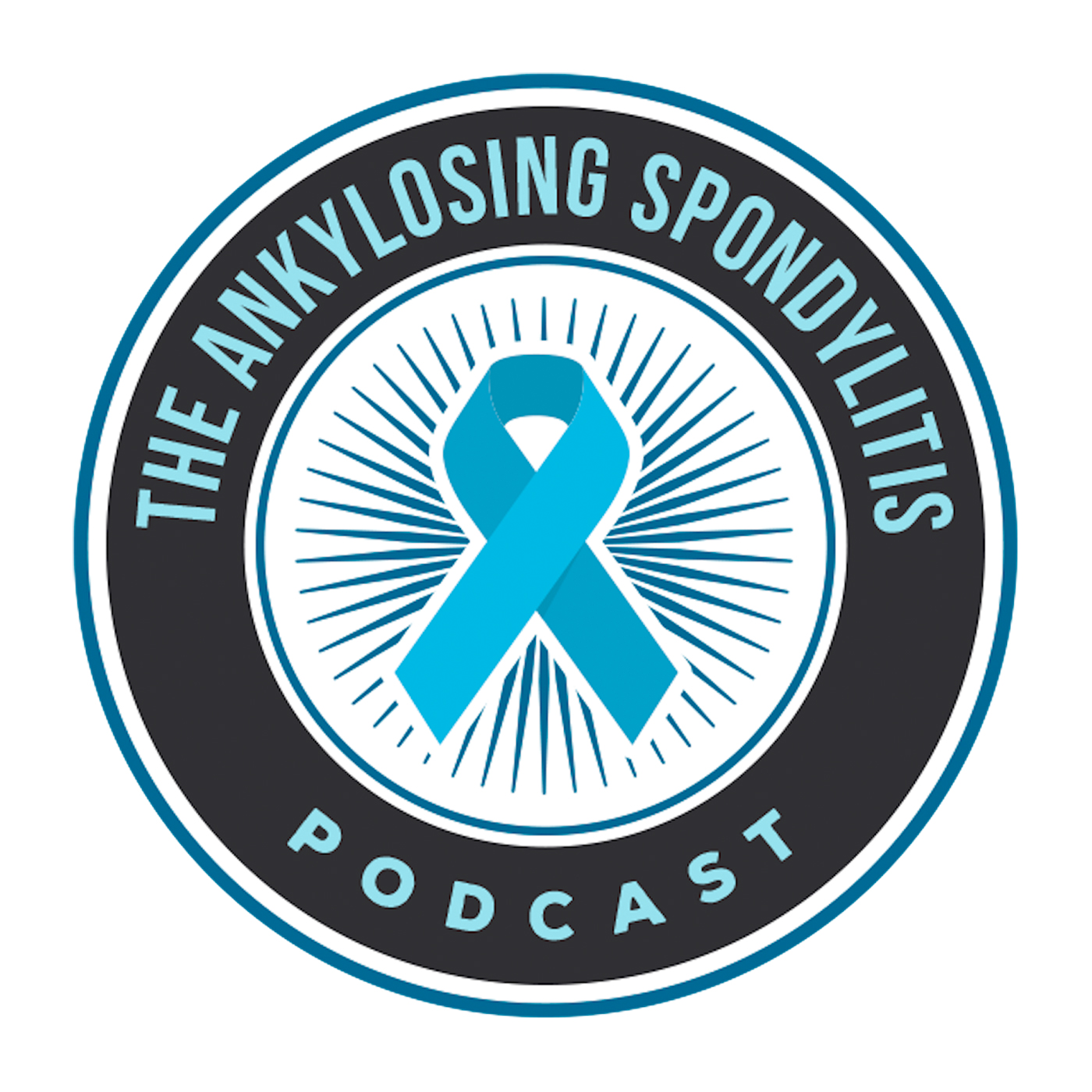 Now these are updates that came about from the annual rheumatologist meeting that was held earlier this year. These are the guidelines from the American College of Rheumatology, the Spondylitis Association of America and the Spondyloarthritis Research and Treatment Network and they've updated their guidelines on the management of Ankylosing Spondylitis and Nonradiographic Axial Spondyloarthritis.

First I want to touch on the question of the week. This one was kind of interesting. I saw a young lady post something on Living with Ankylosing Spondylitis on Facebook that she was having rib pain and was mentioning that to her rheumatologist, and they said that they thought it was unrelated to AS and there really wasn't anything that they could do for that rib pain. I started Looking through it I personally know rib pain can be an issue where your ribs attached to your spine, and also where the ribs come together at the front of your chest. Those areas are prone to inflammation and then again are prone to fusing. Everybody's going to get a different some people may have a lot of pressure and pain in the ribs. Others may have very little I've been lucky to have very little but I have had it and I know it's painful in the show notes. I'm going to have a link this was from posting I found from the UK Ankylosing Spondylitis Association, and they talk about good as your ribs can become a flame, the ribs can become a flame, you know, like I said, where they attach with the spine, and that can lead to stiffness and eventually fusion. If you have a doctor that's telling, you, ribs aren't generally affected or anything of that nature. You know, just a quick Google of rib pain and Ankylosing Spondylitis will bring you a number of articles. So remember that they can be affected One of the things you can do as a patient is make sure you're doing a lot of deep breathing. You're doing exercises to keep your ribs flexible, and even when it hurts. Keep doing that deep breathing. If you're doing swimming, it helps lightweight exercises, nothing heavy. You're not trying to build huge muscles. You're just trying to keep all that stuff around your rib cage fluid. The more you exercise your ribs, like anything else that deals with Ankylosing Spondylitis, the better off you'll be. So again, in the show notes, I'll have a link to this and you can read it. It's real short couple paragraphs long.

With that, let's go on to some of the new guidelines for treating Ankylosing Spondylitis. The last time these were updated, actually drafted was 2015. In that four-year time period, quite a bit has changed, you know, a lot more information’s become available about the diagnosis and then just treatments evolved. There's more biologics that are available now and something to point out in here that I was kind of wondering about seems like they're actually starting to look at as well, these guidelines will be in the show notes (at end of this), I'll have links to these articles. These guidelines help to ensure that rheumatologists, healthcare professionals have current knowledge across the board about what are best practices for treating somebody with AS.

There was 86 recommendations, we're not going to go over all 86 of them. There are really a few that I think are the real important, but again, the article I have links to those so you can go out and research them. They were again disseminated to rheumatologists but not only were disseminated by but we're coming together by the American College of Rheumatology, Spondylitis Association of America and like I said before the Spondyloarthritis Research and Treatment Network, really what they're trying to do is if they can get everybody kind of streamlined in the treatment, the whole goal is to get a faster treatment to people and not these stories that you might read online where a person you know, languishes for years trying to get some type of diagnosis. They're trying to come up with faster ways to track people, so the we get the treatment much earlier in the stages of AS and not later on in life. So as I said this the first time and updates have been done in four years and they address medication and non medication treatments, they look at as related comorbidities, the disease activity assessment, imaging tests and screening and then managing biologics and biosimilars, the main motivation for the changes, you know, as mentioned was the new treatment options that are available. There were also some clinical questions about the medication treatments as well as the use of imaging. The results of the literature review, were then debated by a voting panel that they have that works with looking at all this so everybody gets some input is really what it amounts to. So that ensures that these changes are based on good data and are worthwhile you know for all of us patients.

So that was one of the first things that they said is that they want to start off the treatments with TNF inhibitors. We see that fairly common because most people say, “My doctor want to start me off on Humira or emerald.”

Second strong recommendation to continue treatment with the originator biologic for switching to a biosimilar drug for adults with stable as So basically, the way I read that is if you're AS is under control, and you're on Enbrel, let's say then the idea is to keep that treatment going and maybe some doctors were saying no switch to this or we'll switch to that or we'll move this will do that. I don't know, but this is trying to say why don't you just stay on the thing that's keeping it stable.

Another conditional recommendation they made was to treat the patient with either Cosentyx or another medication called Taltz using those two over using Xeljanz. So basically, we're saying okay, if the TNF you know, Enbrel or Humira doesn't work then to try something like Taltz or Cosentyx verse jumping to Xeljanz. So it looks like Xeljanz has maybe been moved farther down the list of favorable treatments.

Another conditional recommendation was against repeat spine radiographs. A standard approach for adults with active or stable non-radiographic axial spondyloarthritis who are receiving treatment. So it looks like they're saying, okay, we're just not going to do a whole lot of X rays, any type of imaging, I should say if everything seems to be going along with normal as treatment, another one is traditionally in favor of the use of sulfasalazine and limited clinical circumstances and then finally, MRI is not recommended to search for inflammation and patients with axial spawn to arthritis. So really, what does this mean for all of us? For some people, you know, it's going to be nothing like for me, for others, it might mean looking at other medications or fewer imaging tests, depending on what your doctor is recommending.

Again, this is not medical advice, just talking about some of the items that are coming out. So really, it's going to still come down to your relationship with your rheumatologist and what he or she recommends that you do as you work for because these guys are guidelines are not blanket statements, your individual medical history and treatment responses Still going to dictate the treatment you get. Just overall I thought it was kind of interesting. I'll put these links out.

There's an interview with a Dr. Michael Ward. He's the chief of clinical trials and outcome ranch at the National Institute of Arthritis and Musculoskeletal and Skin Diseases. Man, that's a mouthful. He says, “we took the opportunity to revisit some previous recommendations for which substantial new evidence was available and also included new recommendations on some other topics such as imaging”.

It's really great to see that there. Even though we might not think that it appears there's a lot going on behind the scenes, the doctors are still working on trying to figure out more and more about these conditions we deal with that are all interrelated to Ankylosing Spondylitis. So the big thing is going to be as I mentioned, with comorbidities is the ophthalmologist which I've mentioned in other episodes, make sure you have an ophthalmologist that's familiar with treating as because of the I write us and the conditions that you can get with there's also like I said, there was the question And recommendations for a is centered around the use of the IL-17 inhibitors which are like Cosentyx, Xeljanz. and then biosimilars, they're really looking at how everybody is affected and where I was saying that earlier, as I had mentioned that I had been on Enbrel then I switched to Humira and had very little long term success with either of those drugs, but then when I'm put on Cosentyx 5-7 years later and had great results with it for me so far, and I'm no longer allowed to take any NSAIDS due to kidney issues. So the Cosentyx has really been fantastic for me. And again, these are just guideline treatments. This is going to be a real short episode this week. And I hope you all have great luck in reviewing some of these and implementing them with your doctor. The whole key is to make you a more informed patient. So when you go to the doctor, you understand what he or she is, is trying to get at so that you can come to a better treatment plan because that's really what it's all about. Is getting you the best treatment plan you can have to mitigate some of the pain from Ankylosing Spondylitis and any other issues that you might be suffering from. So thank you again for listening. Hope you all have a great day and we'll talk to you soon. Bye