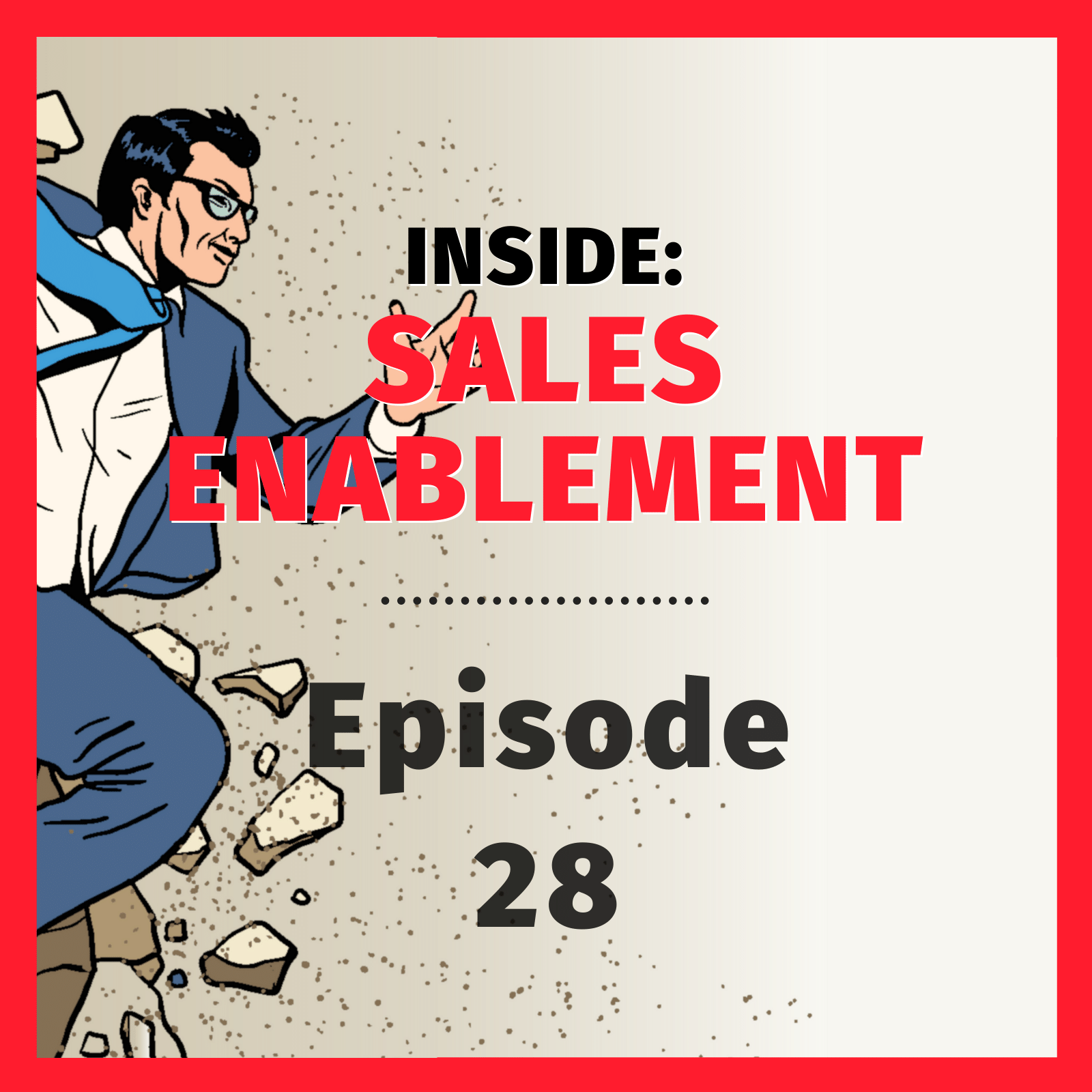 Welcome to the Inside Sales Enablement Podcast, Episode 28

This is part 2 of 5 in response to the global COVID-19 pandemic, specifically tailored to sales enablement.

In words of Wayne Gretzky "Don't go to where the puck was, skate to where it will be"

Our COVID response plan is designed to help you prepare for where the puck will be -- when the economy comes back.

We're bringing back the pane of experts to provide you a well rounded, thoughtful perspective so you can lead and make an ongoing impact in your organization, and with your sales team.

1) What advice are CEOs and private equity firms sharing

2) The economy of the past covered a lot of inefficiencies was are in a state of reconing.

3) How important it is for someone to "stitch' together activities.

Our agenda for this podcast series in response to the global pandemic has five parts:

Join us at https://www.OrchestrateSales.com/podcast/ to collaborate with peers, join Insider Nation, participate in the conversation and be part of the continued elevation of the profession.

And I'm Brian Lambert and together were the sales enablement insiders. Today we're going to do a special edition to help our audience be the most equipped and prepared to navigate these trying times, insider nation. This week, we actually hit 10,000 listeners from across the globe. I'm super excited about that. We've had listeners from 15 different countries and on seven or eight Major podcast platforms. So, thank you so much for that. And thanks for continuing to provide us feedback over at www.insidese.com so in this particular episode, Scott and I are continuing to record a four-part series with our distinguished panel of experts. Before I hand it over to Scott, I wanted to remind you that we've convened this lively discussion and debate with an academic thought leader, a top performing salesperson, a portfolio leader to some of the biggest names in technology, and also shared our analysis and synthesis of what we're seeing in the context of the COVID-19 Global virus. Why did we do this? Well, it's simple. It's to help you lead your team and make an impact while adding strategic value to your leadership and organization. Changes are going to happen, and you need to skate to the puck. So, let's recap in part one of our COVID-19 series that was Episode 27. We framed out the landscape and capital the current economic times to past recessions. In this episode, Episode 28. We're jumping into part two, where we discuss and project and make a call on what we believe will likely happen inside most organizations. So, you can make a better plan and differentiate your leadership and approached as strategic value. And I also want to let you know that in part three of our series, it's chock full of what you can do to lead from the front and balanced strategies and tactics, that's Episode 29. And then finally, we're going to wrap it up with part four, which I'm excited about. That's a rapid-fire question and answer session where Scott and I answer as many of the questions as possible that we're getting from you. So, stay tuned for that. Make sure you add us to your podcast player and let's get started. Scott, take it away.

Well, I think the first thing is to realize that we were in an impotent state before the crisis started. So, I think the fact that the crisis is now hit the question is Is this going to be the tipping point? And so, what I mean by that is that there are a lot of different companies who have been doubling down on certain strategies trying to throw new tools throw new people throw new training at the problem, and, and the efficacy of those efforts have been consistently less than exciting. So, so we have actually pretty heavy turnover rates in the sales leadership position because of this fact that whatever the traditional methodology is out there, it hasn't been working. And so, behind the scenes, a lot of a lot of companies will sit down and say, Hey, you know, I had a one one global leader call me we haven't talked for three years because they quit doing work with us for three years ago. And it's a traditional more of a traditional approach but in the in the high end b2c space selling into to business executives. He said, Hey, everything we're doing its efficacy is dropping off and has been dropping off for 18 to 24 months. And I said yes. where, you know, where have you been? Did you and he had left us about three years ago, when we started seeing the beginning of this from our partners, the same that outreach had to be different. And we have to be a little bit more fine tuned. At the same time, we found scaling, and everybody's gone through the scale. So now the question is, we're scaled up we have all this capacity. One of the NBA clubs, I actually had a conversation with them after a keynote that I did in Vegas. The guy called me up and said, thank you for letting me know that, you know, we're probably overplayed on activities, because I've actually eliminated all activity tracking in my sales org. I said, that’s not what I said. I'm like, you know, he said, No, but that's what I heard. That's what I heard in the keynote is that I shouldn't be tracking activities, I should be tracking activities that that actually move revenue. And so, we're actually removing some of the some of the metrics. So, I think one of the things that's interesting I think from a sales enablement lens, and and even the leadership lens is that the root cause was here before the crisis that just hit us. So, we were already in a crisis mode as a sales and marketing space. So, this is this is actually facilitating in the last segment, but I think it's, it's relevant to this segment is, I read a book once on the stock market crash. And what it talks about is that we have manias, followed by a shock, which then induces a panic. Which then cry prices creates a crisis? Well, we were in we were in a mania prior to this moment where we were investing in demand Gen at levels and then automating that investment and demand Gen. What's amazing to me is that if that's done right, it creates a multiplier effect. But then the headcount isn't required. So, the guy from the NBA I won't say his name because I was permission to say the name. He said that they have one of the smallest head counts in in the NBA, and yet they have the most profit per seat in the NBA, and they have a losing team every year. But they've found a way to multiply the efforts of their salespeople in a productive way. But less than According to Jim Dickey, less than 1% of sales organizations, the 2% of sales organizations have even started to deploy artificial intelligence tools. And yet those artificial intelligence tools augment our capacity to do the job with precision instead of scale.

Well, how I was gonna say I think, you know, one of the things that I think you said that it's incredibly important is and not well understood is sales enablement needs to get really good at stitching together business results, like you know, growth, number of customers with two or more products or whatever the business result is that you're looking for with the objectives that that needs to happen and then the activities that need to happen, and that's teaching together on I would view is very much a broken process. And then in Scott, to your point, when general partners get frustrated and they look at a sales and marketing efficiency ratio, they have a hard time understanding why an enablement the person or the sales organization or the marketing organization, figure out the right activities to drive this ratio. I think that's I think that's great. And I I'm gonna pick up on something Dr. Dover shared with us. So, I think what we, what we have it's not I think I know, if we look at sales as one big monolith, one big giant thing. That perspective is going to lead to a lot of waste and inefficiency. And that inefficiency is going to cause the investors whether it be the C suite in a large public company, or the people who sit on boards for private equity company to replace the leadership and then you're going to get a whole new set of things you know, to worry about. There is no such thing as a one size fits all Salesforce and we're going to hear a little bit from Lindsay, you know on this, but an inside sales organization is different than a strategic account. organization is Different than a vertical specialized organization. So, one of the things that will happen, and I very much agree that there was a lot of poison in the well, but the overall economic health masked a lot of inefficiencies in sales and marketing. Absolutely. So, what we have is a day of reckoning, and we can either look at it as scary or a great opportunity for innovation. And I think what chronologist said was, this is a great opportunity for innovation. Just make sure you're aware of what that is. So, when I was at Forrester, I did a lot of analysis of what works, I became sort of obsessed with the What Works analysis or 8020 analysis, rather than just survey type of analysis. And one of the best examples or stories that we could plot over time was BMC. So, BMC had a strategy to get out of the economic recovery. So, it started that You know, in in the depths of the, of the deep, deep, deep recession, they had this vision called business service management. And a lot of investors really liked it. As a matter of fact, one of my friends was an investor and he bought into that investment, hook, line, and sinker. They made a big position in that a year later. So, we fast forward to 2010 A year later, or half a year later, what were their results while they grown their revenues 30% their market cap gains zero because they weren't demonstrating economic growth or organic growth. Here's the fundamental problem. The fundamental problem was that in order to execute business service management that concept and can all you remember that we had the we you were at HP at the time and you heard from one of your clients, how much in love they work with the bsm VSM vision, for sure. Here's the problem. The problem is they built a sales engine where this...