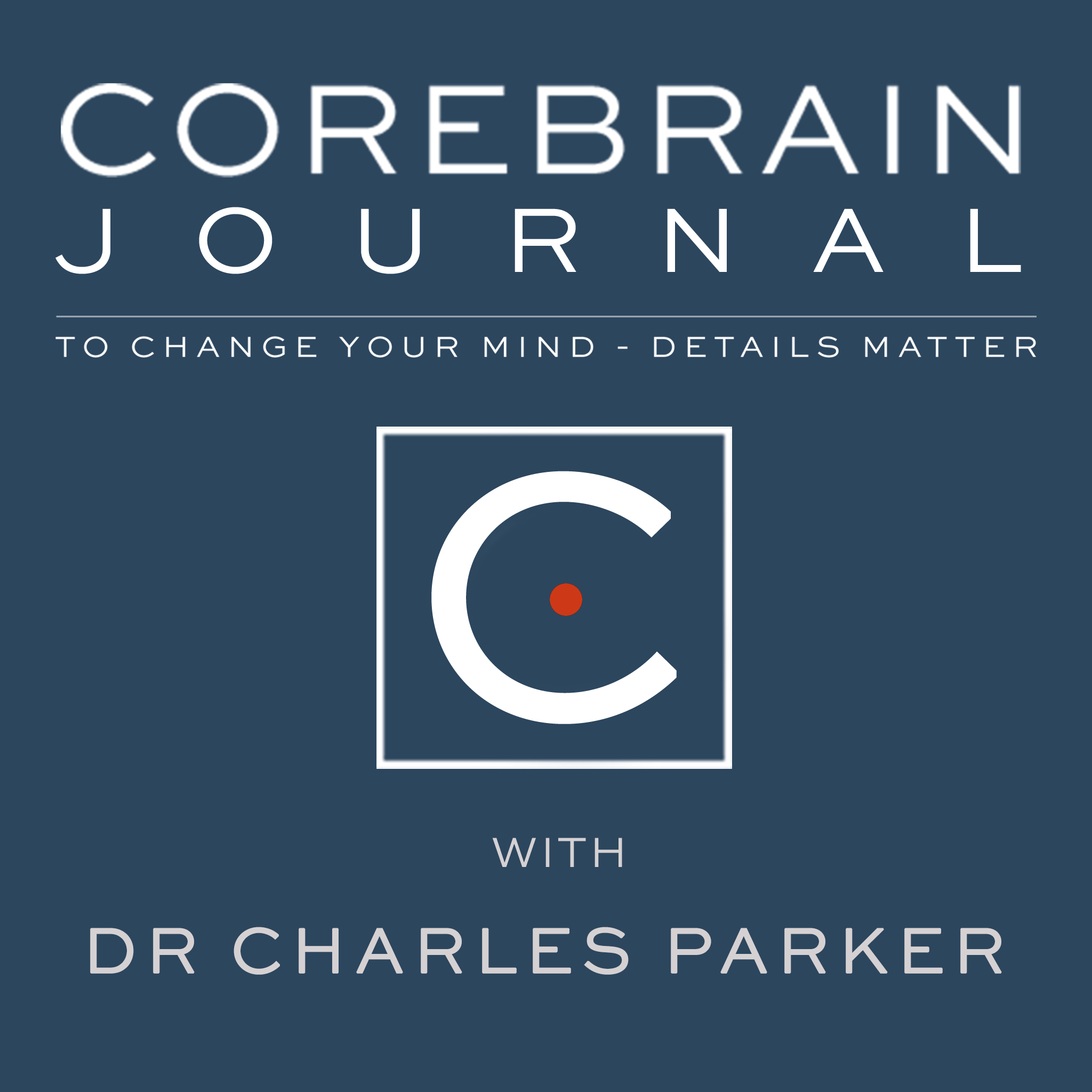 The great thing about science is that it's true whether you believe in it or not.

133 Dr. Lawrence Afrin - This CBJ/133 episode takes on the issue of the pervasive, yet often under-recognized, medical mystery of Mast Cell Activation Syndrome, it's crippling, life-threatening effect, and it's absolute relevance in the evolution of understanding important immunity nuances of mind science.

Ed Note: Yes, this is a republish [2] of the second most popular Episode download here at CBJ after more than a year of reports from more than 100 thought-provoking neuroscience consultants and patients. MCAS with Dr. Afrin bears repeating for our growing international list, with many new global listeners since then. We first published this piece in July '16 at CBJ/028. [It's second in total download numbers to Dr. Bill Walsh on Methylation at CBJ/025. We welcome our increasingly informed audience - note that these two apparently arcane topics present as the most frequent downloads.]

Dr. Afrin is charming, refreshingly articulate and passionate about his work as one of the leading authorities in the world [my perception, not his PR] on this exceedingly complex condition. You may not understand some of our conversation - as you will hear me also asking for clarifications - but this episode is an absolute must for anyone with a complex untreatable biomedical condition.

MCAS should be on everyone's radar. Listen up as MCAS effects and estimated 10% of the general population - and directly affects the brain, with both mood and cognition conditions. It's where the rubber often meets the rocky immunity road.

"Consider your life. - Now consider how your life might change if things like loud noise, heat, strong emotions or stress, odors or even being startled could cause you to have an allergic reaction. Imagine suffering allergic reactions so frequently that you prayed for just 30 seconds of real relief each day. Imagine dreading the next response, because it may bring vomiting and diarrhea, convulsions, unresponsiveness or even paralysis-like symptoms."

Jennifer Robin, first diagnosed with mast cell activation syndrome (MCAS)[2] in 2014, faced these challenges daily until she received treatment in 2015 from the University of Minnesota Health Hematologist/Oncologist Lawrence Afrin, MD, an internationally respected expert on MCAS.

'The disease can be a life-ruiner. I was unable to work, live independently, drive, have a social life—or have much of any life,' said Jennifer."

Her Immunity Issues: 'The world just wasn’t safe for me.'

Although she was always very sensitive to allergens, Jennifer’s overall health began to nose dive in her early 20s. A Maryland resident, Jen was forced to resign from her job when a variety of physical symptoms—including severe headaches, cognitive difficulties, and fever-like problems—began to affect her health.

In 2010, Jennifer was misdiagnosed with Lyme disease, a common misunderstanding. Treatment for Lyme disease did not alleviate her symptoms, which became more severe over time. Jennifer began experiencing seizure-like episodes, slurred speech, insomnia and muscle weakness.

'I was so sick and pretty much bed-bound for a couple of years. My parents had to help me to the bathroom two feet away,' Jennifer said. 'No doctor seemed to have any clue what was happening.'

In 2013, Jennifer was diagnosed with postural orthostatic tachycardia syndrome (POTS - a dysautonomia syndrome), which is marked by an increase in heart rate when standing. That same year, she was also diagnosed with Ehlers-Danlos syndrome (EDS) [8], a group of genetic disorders that primarily affect connective tissue in skin, joints and blood vessel walls.

But neither diagnosis seemed to account for all of Jennifer’s difficulties, which continued to become more severe. At times, she felt the tissues of her throat closing—a life-threatening occurrence known as anaphylaxis.

In 2013, the two doctors that diagnosed her with POTS and EDS both referred her to Lawrence Afrin, MD, who was transitioning from the Medical University of South Carolina to a new position at the University of Minnesota Medical Center. Afrin is one of the most prominent international experts on mast cell activation syndrome (MCAS).

Listen up as he weighs in on this challenging condition.

...misunderstandings and neglect create more confusion in this world than trickery and malice. At any rate, the last two are certainly much less frequent.

'MCAS is a chameleon, difficult to identify for many reasons,' Afrin said. 'It presents with different symptoms—which are often inflammatory or allergic in nature—to varying degrees in different places in the body.' To make matters worse, many healthcare providers are not yet familiar with the condition. Though more research on MCAS is emerging, relatively little information exists about the syndrome in medical literature. [Must: see the link to Dr. Afrin's excellent book on MCAS below.]

At a follow-up appointment with Afrin months later, two of Jennifer’s lab results came back positive, including her level of histamine, which was five times the normal limit. Histamine is a chemical neurotransmitter that causes allergic responses. That day, Afrin diagnosed Jennifer with mast cell activation syndrome.

Mast cells, which release histamine, are a critical component of a person’s immune system. But in patients with mast cell activation syndrome, the mast cells are overactive. Many of Jennifer’s symptoms were allergic reactions—caused when her hyperactive mast cells responded.

'Out of the hundreds of doctors that I have seen, it was Dr. Afrin who saved my life,' Jennifer said. 'Never once did I feel the need to ‘prove’ that my symptoms were real or of physical origin as I’ve had to with other physicians. He just believed me.'" [3]

Dr. Afrin's Work With MCAS Serves As a Metaphor For The Evolution Of Neuroscience

Molecular measurements now change the rules of the psychiatric diagnostic and treatment game. Why? Improved target recognition for contributory molecular mind variables offers increased precision and more predictable outcomes. The complexity of brain science requires more comprehensive thinking and data inquiry. Insufficient knowledge based upon old science is just that - insufficient. Diagnosis by appearances is not categorically wrong - far too often it's simply inadequate - as it was in my practice before I had to admit defeat with then-best diagnostic labels and traditional psychiatric medical information.

My Strong Recommendation To Mind Science Professionals: Read It Now

MCAS is a global problem, not limited to Dr. Afrin's post in Minneapolis at the University of Minnesota. In my offices, I've missed it for years because this information didn't arrive on my doorstep wrapped in an Amazon package.

If you care about or care for, chronic, refractory treatment failure, both medical and psychological/psychiatric - you absolutely must first listen here to this interview with Dr. Afrin, then you must read his fresh, engaging, unpretentious, life-changing book. Read it even if you're a Ph.D. psychologist, an LPC, LCSW, or if you're an FNP, PA or trained medical professional at any level - especially Family Practitioners and Internists on the front lines who repeatedly witness unexplained treatment failure.

Why? Because you often see patients like Jennifer in your offices and regret it when you don't know what to do.

Overcome your immunity denial, your concern about litigation [see the multiple references below] based upon misunderstandings from dogma and disbelief, and dive into these refreshing waters not only for the broken souls in your office, but for your well-being, self-mastery, and your job-well-done legacy. This book builds character.

Dr. Afrin never claims, even in the context of his earnest, passionate, opinionated self, to have all the answers. Just read a few paragraphs, and you'll quickly feel that he's an old buddy you met out at your lake house one summer in Minnesota. He's humble with what he didn't know then, and what he doesn't know now.

He's just smarter about MCAS than we are.

His relentless search, his new answers, directly inform our work every day as examples for both original process and enlightened content.

I'll warn you from the outset; you won't get every detail on your first read of Never Bet Against Occam - as I didn't at my first cursory read. But don't let that dissuade you. The language and concepts are different, and Dr. Afrin ties in so much for our collective next steps in Mind Science on immunity, chronic illness, cognition, and the pervasive failures with psychiatric medications - that's the reason this one is essential. [RE: Histamine matters - Dr. William Walsh agrees, as it creates issues with neurotransmitter imbalances through dysregulation of methylation and transporter proteins at this CBJ/025 Interview.]

You may already know: that Prozac doesn't improve MCAS and will often interfere with the treatment. Biomedical insights, informed targets, offer new hope when any of us are less informed. If you don't know what you're shooting at or with - you simply can't hit that amorphous target.

A Very Short Video on Mast Cells And Histamine - 1.59 min

First Easily Forward This Audio Message Link To a Friend

References For This CBJ Article

We will reopen Dr. Afrin's Book Drawing below - it's closed in two weeks.

For: Never Bet Against Occam

134: Dr. Stephanie Seneff is a Senior Research Scientist at the MIT Computer Science and Artificial Intelligence Laboratory. She received the B.S. degree in Biophysics in 1968, the M.S. and E.E. degrees in Electrical Engineering in 1980, and the Ph.D. degree in Electrical Engineering and Computer Science in 1985, all from MIT. For over three decades, her research interests have always been at the intersection of biology and computation: developing a computational model for the human auditory system, then understanding human language to develop algorithms and systems for human-computer interactions, as well as applying natural language processing (NLP) techniques to gene predictions. She has published over 170 refereed articles on these subjects and has been invited to give keynote speeches at several international conferences. She has also supervised numerous Masters and Ph.D. theses at MIT. In 2012, Dr. Seneff was elected Fellow of the International Speech and Communication Association (ISCA). Her extraordinary insights change the game of appearances with reliable, actionable data. Must listen.