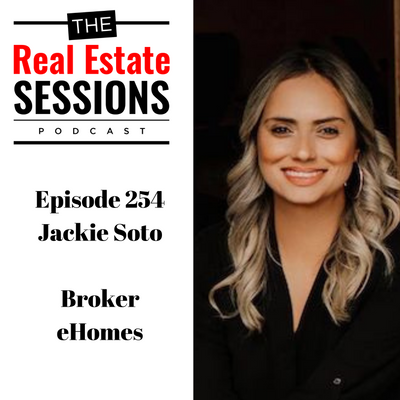 Today, our guest has a dedication to serving and giving back that she shows in her professional and volunteer ventures. Joining us is Jackie Soto, partner and broker at eHomes, a brokerage out of the Inland Empire in Southern California. Jackie has involvement in the WomenUp organization, where she has hopes to empower other women along her journey. Jackie also serves on the National Association of Hispanic Real Estate Professionals board and the National Association of Realtors' Young Professionals Network.

In this episode, join Jackie and me to hear how Jackie had her start in the industry at just 18 and led her to two successful businesses! We also discuss the need for education and change in the real estate industry and just how Jackie is helping her fellow agents along the way!

"I always told myself once I found that key to success and I could learn how to build a business, successfully, I wanted to carry that on to other agents. I wanted to empower them because I have been there, and I want to pass that on. I don't want agents wasting five years of their career because they don't have access to the proper resources." –Jackie Soto [10:52]

"It's truly been reaching out to mentors and asking for help and asking the right questions. Not being afraid to ask those questions, not raising your hand to say you want to do something, but you don't know how to do it. Asking for that guidance, that's been huge for me." – Jackie Soto [12:51]

[01:45] Born and raised in Southern California

[05:40] Changed Plans and the Path into Real Estate

[06:49] The Push to Pursue Education in the Industry

[12:02] Reaching Success with Help from Mentors

[16:54] Development in the WomenUp Community

[22:07] Openness to Change and Improvement

Although Jackie was not originally on the path to real estate, she fell into real estate very early adulthood. As her mom was in the industry herself, Jackie had the opportunity to help with an open house for her mother's colleague. This was the moment that had Jackie switching from the pre-med track to real estate.

Jackie Soto spent most of her early career and most of her twenties studying to empower herself through education. Jackie went back to school to pursue real estate, where she received her brokerage license. Now, Jackie works towards different designations as she feels all agents should pursue education as the industry is continually evolving.

From the beginning, Jackie Soto knew she wanted to open her own brokerage. She always told herself that when she found the key to success and learned how to build a successful business, she wanted to help other agents achieve the same. Jackie truly wants to empower them by providing access to the proper resources to grow in their career.

Jackie Soto opened Divergent Realty, where she wanted to help growing realtors develop in the areas that they felt were more natural or were driven towards. In January, Jackie Soto merged her successful Divergent Realty with eHomes, allowing her more collaboration with the industry and achieving more goals she strived towards.

Jackie admits that the WomenUp community had a lot to do with her success today. She does a lot of developing with WomenUp and hopes other women will share her success and believe they can do the same thing. Jackie wants women across the nation to hear it and get involved in leadership as well as being an inspiration to her daughters.

Jackie Soto's advice to new agents is to be collaborative and be willing to share. Jackie doesn't believe that there is a secret sauce but instead a lot of hard work. Jackie believes that you should keep moving forward, and when you excel and elevate yourself, pass that on to those around you!