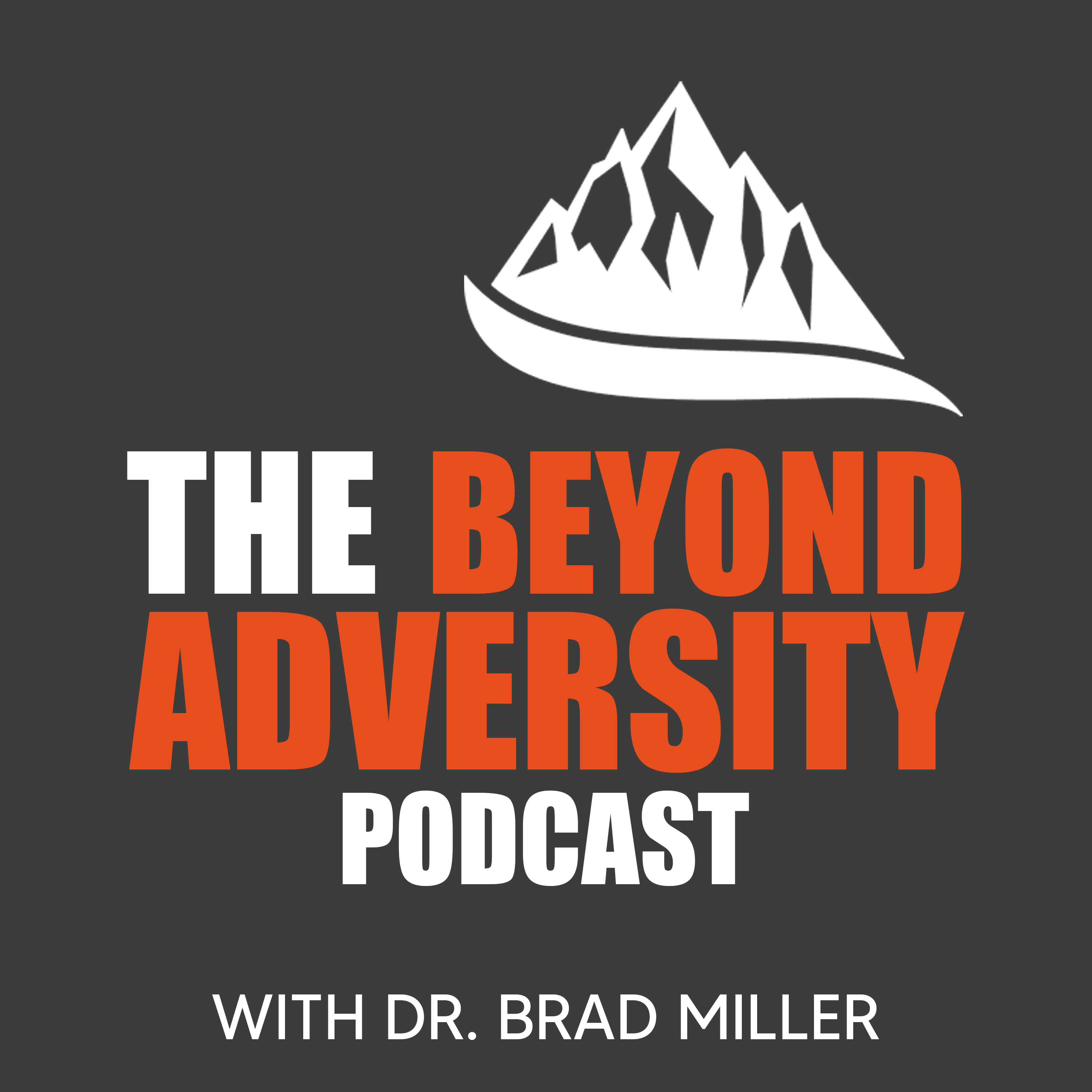 Scott is the founder and host of ""what was that like"" podcast.

A podcast with true first-hand stories - a plane crash, a mass shooting, a bear attack, a train derailing, and more. The guest tells us exactly what happened and answers the question, What Was That Like?

In this episode, Scott shared some of the intense stories he has heard in his podcasts.

He talks about one of his guests who experienced an earthquake at the base of Mount Everest, a lady who escaped her house from severe flooding, and many more dramatic stories.

As the host of this podcast, he felt many different emotions from hearing some of his guests' stories, and he aims to inspire his listeners through his podcast.

Episode 162 of The Beyond Adversity Podcast is a must-listen for anyone going through a hard time and someone who wants to expand their knowledge about the happenings in life.

"The Beyond Adversity Podcast with Dr. Brad Miller is published weekly with the mission of helping people "Grow Through What They Go Through" as they navigate adversity and discover their promised life of peace, prosperity and purpose.

[00:01:15] Scott Johnson: Michael, who was at base camp at Mount Everest, had an earthquake, and some of the people he was with were never found. But he survived. Just being at Base camp on Mount Everest is a story in itself.

[00:01:49] Scott Johnson: Her house was flooding, and she was there with a friend. He was helping her gather up some stuff, and they were going to try to escape somehow. Yet, at that time, her house caught on fire. Because her car in the garage had started floating, it hit a gas line or something. And so there was natural gas leaking, and there was fire, and her house was dangerous then to be in, but they couldn't get in the car and drive away.

[00:02:33] Scott Johnson: They're all on the jet ski, and it was waterlogged. He couldn't get it started again. Finally, you got it started. They took off, and as they were leaving, the house exploded. Things blew past her hair. And the way she tells the story, she's very animated.

[00:03:32] Dr. Brad Miller: No, we don't always prepare ourselves for the moment, but some people may be gone through military training or something. Had they prepared themselves, or during the moment, had they had a certain attitude of calm or demeanor, any common themes you may have seen in the stories you've been privileged to.

[00:04:11] Scott Johnson: The couple that came to mind is a girl named Jill. And the title of that episode is Jill was kept in a basement. She was human trafficked for three years. And so she wants to get that story out there to raise awareness and help prevent other girls from being trafficked.

[00:04:49] Scott Johnson: He has a podcast, and he's channeled that bad thing into something good, and he's saving lives and honoring his daughter at the same time. A lot of people want to raise awareness about a particular subject.

[00:05:29] Scott Johnson: Her parents, her dad particularly a hoarder in a six-room house. And so she spent the next several months cleaning that hoarded house. And so there's, it's like a dual meaning in that one, but a lot of them is to raise awareness of suicide or other things like organ donation, important things that they want to get out there and can do that through their story.

[00:06:14] Dr. Brad Miller: I've had some human trafficking stories and some stories, but suicide ideation and getting through health issues and stuff, but they now are passionate advocates or champions of those causes. That's a cool thing to see. And I was just wondering that whole process then, how has the passion the seas folks impacted you?

[00:06:41] Scott Johnson: Absolutely. Yeah. as far as a cause, after I talked to Jennifer and the accidental death that she caused, I became much more aware of myself and distracted driving.

[00:07:09] Scott Johnson: sometimes I'm in tears. Just like the guest is when they're telling the story. There was a recent if somebody wants a good cry, here's a good one. The episode called Courtney's mom chose when to die. And this is about medically assisted death. That is, I knew when we were recording that it would be a super impactful story when my audience heard it.

[00:07:46] Dr. Brad Miller: when you've changed, and then that because a process of carrying out a mission or advocacy to help be a conduit to change others.

[00:08:29] Scott Johnson: It's not easy for everyone. I've learned a little bit of a trick. I want to get out of the way and let people tell their stories. My guests or listeners have tuned in to hear that story, not to hear me talk about that story. I tell people ahead of time it will just be you telling the story.

[00:09:05] Scott Johnson: Answers that question. When I'm editing that episode, I'll take my question completely out. It just sounds like the guest is continuing to tell their story. And that's why many people say, man, you have people that are such great storytellers, and you never interrupt.

[00:09:32] Dr. Brad Miller: That also helps to move the flow of the story around because when people are involved with their story, we're very involved and where I want to go with you now for just a second here, Scott, has to do with a balance here in the world.

[00:10:05] Dr. Brad Miller: It's a phrase that's sometimes used in the news, If it bleeds, it leads, and this type of thing. Sensationalism is where I'm going with the question here. Given that so much of the content of what you share is pretty intense and even gory stuff, how do you come to a balance, or how do you have a sensitivity about what is appropriate to share and what is sensationalism? or maybe if someone is trying to take advantage of this to gain some one-upmanship?

[00:10:59] Scott Johnson: So, for the most part, I leave that up to the guest. They can talk. That to whatever degree they're comfortable with. It's the details. One of the things I always tell people, it's the details that make it a good story. So that's why I tell them I'm not. I don't have any time limit as long as it takes you to tell the story.

[00:12:20] Dr. Brad Miller: I'm just a huge believer that people are seeking purpose and peace, and I think when people share the story often, there's a sense of bringing peace to their life. Everybody's got a big story. It may not be as dramatic as some of these, but everybody's got their big story.

[00:13:19] Scott Johnson: And they will be gone someday. That may be the only thing their family has to listen to audibly to hear that story. I have interviewed. It wasn't on this podcast, it was on a previous one, but I interviewed someone who had talked about he had lost some weight. He was getting into exercising because he wanted to grow old.

[00:13:56] Scott Johnson: I sent a, it was a CD with that audio recording on it of him to about ten different family members. And that's, how do you put a value on that? Yeah, it's a gift. It's a really valuable thing. It's inevitable. I've done 119 episodes. Now it's inevitable that some of those people are going to be gone

[00:14:24] Dr. Brad Miller: it's important, I believe, and I think part of what you're doing to leave a record or leave an accounting of what has happened to us, and that's a good thing. And you've been great at that, and it's a real gift of what you leave here. So what kind of final thoughts might you have, Scott, for folks who may want to find out more about your podcast or storytelling legacy that they can leave?

[00:15:02] Scott Johnson: But yet everyone has stories. That's true. And it's what happens. Stuff happens to us every day, and we think, wow, that's interesting. But then, we forget about it. If we documented all of those things, we'd have a book full of stories. My advice to people is to be more aware or pay attention when something happens.

[00:15:40] Scott Johnson: I shouldn't say that. Some of them are intense, but it's, and I put it at the end of each episode because that gets people listening to the end. Because people love these stories. Everyone has stories like that. It's just a matter of being aware of them.

[00:15:56] Dr. Brad Miller: Lister stories at the end because it gives people a little bit, just a little sense of ownership and behind the scenes type of, Sensibility about your show connected, directly. And I think that's part of what we're talking about here, Scott, where they want, no matter how we feel about it, people want to be heard.

[00:16:26] Dr. Brad Miller: And I think it may help people to have some of those, hard, maybe some of those hard stories to tell and get them out there and, because there is great value in it. So thank you for sharing that. And his name is Scott Johnson. And his Podcast is, "what was that like?" And we will put links to his show at our shownotes@drbradmiller.com.