Doug Whiteman, owner of George’s Sierra Shell a successful 42 year old business in Fontana, CA, is Motor Age’s TOP SHOP in 2014. Not only is he a strong operator and shares solid insight to his remarkable success, Doug and team is very involved in many philanthropic efforts in his community (see overview below).

As the Motor Age top shop in 2014, I did an in-depth interview with 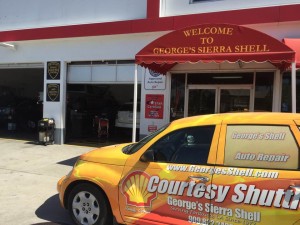 Doug and we are presenting it in two parts. Part one is Episode 9 and part two is Episode 10. Listen and learn about Doug’s female centric service position, that he consults for ATI, what key lessons he learned from his dad, why he continues to have a weekly call with his business coach and what he learned by getting his oil changed at the car dealer. Doug also shares what is behind the FAN of the WEEK and what happened to change his business 10 years ago. He has his own training room, a call center with a special customer focused strategy and he discusses hi expansion plans for 2015.

A pinnacle to most awards is being chosen Motor Age’s TOP SHOP in 2014, that’s TOP SHOP (Listen to what his goals are this year)! Also recognized top 12 shop and humanitarian award from ATI, the Kukui Humanitarian of the year recipient, Honored by the Fontana Chamber of Commerce for receiving the Small Business of the Year award, Recognized by the Susan Komen during the Breast Cancer awareness month, named ASE technician of the year 2008.

There is so much to learn from Doug Whiteman, so enjoy and listen and learn just one thing! ENJOY.