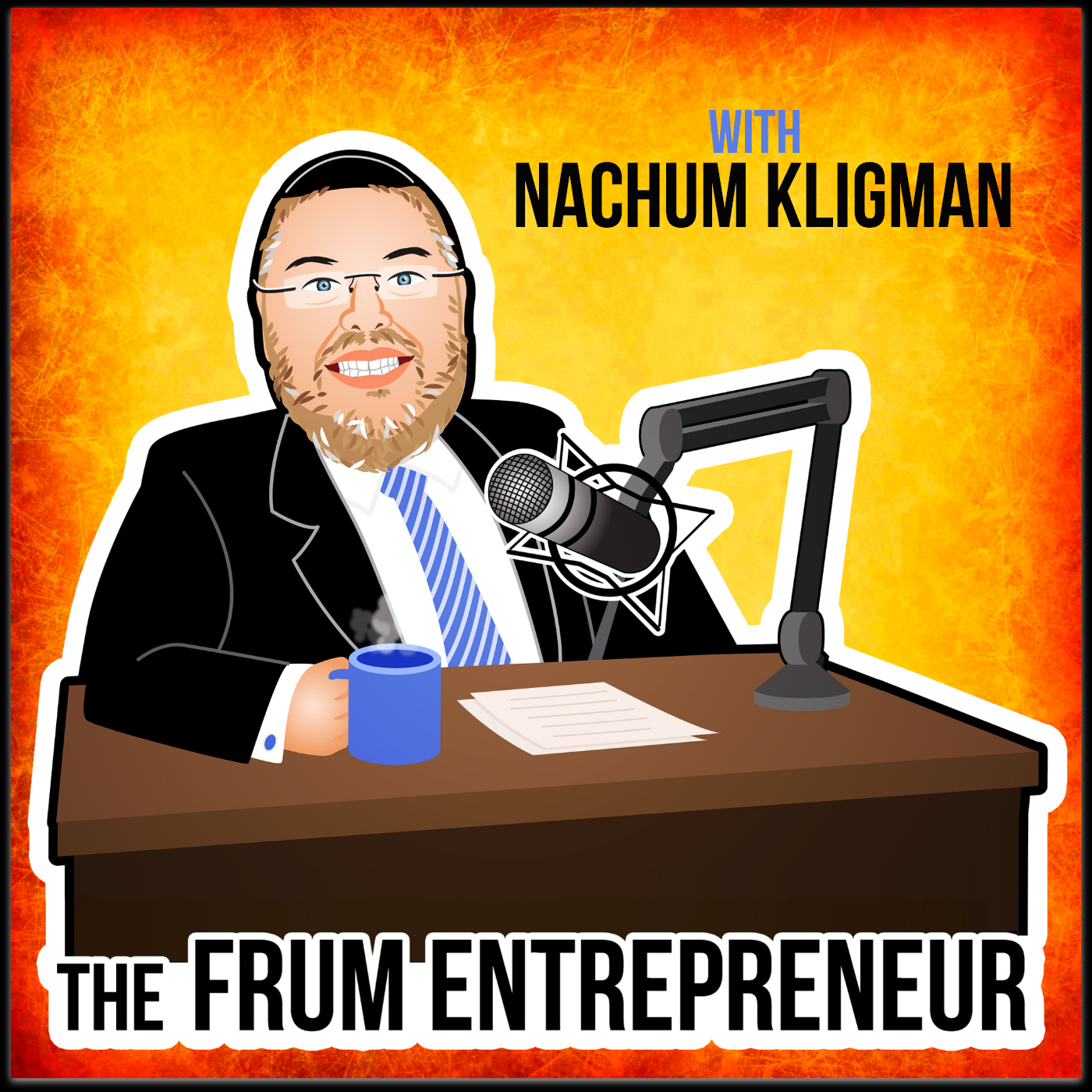 Remi Award Winning Film Producer and Writer of “The ARK Report”. Harry is a Canadian-born research analyst, and has been working with MMLC (Israel) as a legal consultant for media organizations since moving with his family in 2005. Previously a Patent and Trademark Agent, he is now the internationally acclaimed expert on the Ark of the Covenant. Harry is both a friend and an entrepreneur and in this interview he talks about some of the challenges he has faced as an entrepreneur moving to Israel from Toronto and the foundations of his media company.

(Harry was kind enough to answer on paper some of the interview questions I would be asking. Below is the questions and answers. While a lot is covered in the podcast, you can learn more by reading below)

Questions: What is your biggest strength as an Entrepreneur? • What is your biggest weakness as an Entrepreneur? • What is a habit you wish you had? • What is one thing that has you FIRED up right now?
Answers: As an example, my biggest strength as an entrepreneur was with Systems Support at CIBCMellon in Toronto, and at my company eWaterTek Inc. in Toronto, where it was like being a visionary, i.e. – bringing things into being, implementation that was ahead of the times, and improving upon what’s already there; My biggest weakness is sharing/trusting in my funding and integration of these concepts with colleagues – theft; I wish I could get into the habit of getting past the scars and grudges that have been left engrained on me from over 20 years of work and the nasty partnerships I’ve had to deal with; I’m fired up about Governor Mike Huckabee’s proposed 2016 run for the US Presidency, and how Moskoff-Media Ltd. might contribute to that (writing, documentary, TV series).
Q: Worst Entrepreneurial Moments? A: Not being properly in ‘the zone,’ i.e. – misreading the market signs, and therefore not responding properly resulting in funding the wrong projects, overworking, etc.

One example happened a couple years ago when I took a trip to a remote part of France right before Pesach on a lead that I received but never did my due diligence homework (SWOT charts) on the deal involved and where it would lead. Turned out to be a false lead, and I just made it back on the last flight on erev Pesach to catch the seders. Was never able to capitalize on that deal. Learning lessons the hard way has always been the best way for me, for better or for worse.
Q: The “Siyata Dishmaya” Moment?

A: I started noticing these moments when I was at Interlochen and especially at Berklee on scholarship as a jazz drummer and composer. When I would record with my own ensembles in the studio, and even playing with big bands live, these surreal moments would come when being truly enveloped ‘in the (musical) moment,’ transported to a different place, not knowing where you are; a different type of experience, usually only momentarily, but hugely rewarding, almost magical. It’s all about vibrating on a higher level, whether it’s creating music, a program, or producing a movie onset, so that you get intrinsically tuned in to things that would otherwise be missed. Every good CEO knows that feeling, recognizes it, and acts on it, no matter what the risk. The idea is to get those moments of inspiration as often as possible. Call it “saita dishmaya” or whatever it is. The truth is that a person’s parnassah is already meted out for the year at Rosh Hashanah, so it’s just a matter of bringing the blessings down into your life on a daily basis. Not always easy! It’s like the time I woke up from this dream about a middleware system that allows two different legacy computer systems to communicate with each other. I led my IT team at CIBCMellon for over 2 years until I finished this incredible FundSERV project that all started as a result of this vision one morning. Reminds me of the movie: Back to the Future, where the scientist falls off his toilet seat, hits his head and comes up with the “Flux Capacitor” enabling time travel! In order to make it happen, you have to surround yourself with a team that believes in you, and is at least as smart and equipped as you are.
Q: What is the best advice you’ve ever received?

A: A couple good anecdotes come to mind. I asked someone on my advisory board whether I should go for this business venture or not (I was 50/50 racking my brains). He responded: “When all else fails, trust your gut instinct.” The other great advice I received many, many years ago when I was still a teenager was from a world-famous musician. After the show he said the following words which stood with me all this time: “Know that you’re either #1 or #2. Don’t fool yourself: if you’re not #1, you’re #2. There is nothing else.” In other words, you’re either one of us (as it were), or not; either you’re the best or you’re like everyone else. “You can fake it until you make it, but then once you make it, there’s no faking it anymore!”
In 2000 when I started my own company after leaving the investment bank, I was told by an old, retired patent attorney to use my technical and creative skills to become a patent attorney, and his old firm would gladly hire me after 2 years. This was great advice and a great offer, but I didn’t listen! Instead, I became an entrepreneur with my own company that I still have until today. But I did end up eventually becoming a patent and trademark agent when I moved to Israel about 10 years ago, and have worked for some excellent law firms here since then. At one point I was holding down 3 jobs simultaneously.
Q: You are now one of the few Jewish, religious entrepreneurs in the media industry in Israel, and anywhere for that matter. What tidbit of advice can you share with Frum readers as a unique entrepreneur in this field?
A: Remember why you got into it in the first place, the love for what you do, and seek out the redefining moments. Those rare moments when it all comes together and everything goes right. Then it happens: Your MOMENT. Like Queen Esther appearing before the King. Everyone has their hour, as it says in Pirkei Avot. Terry Bradshaw, the famous NFL quarter-back once said: When you’re at the Super Bowl at the top of your game, always play it down. Never let the moment, the hype, catch up with you…..
Q: Share one of your personal habits that contributes to your success?

A: Staying focused on the mission at hand, because everything you do is a mission in some way, and it takes a whole lifetime of doing, so each moment shouldn’t be wasted. Be on message, or put another way “on purpose” all the time. Like Yoda says to the young Jedi in Star Wars: “Don’t try…… DO!”
Q. Share a resource, like Evernote, that you can share with our listeners.

A: DROPBOX – always back things up if possible. Keep a record of your actions for future reference.
Q. What book would you recommend to our listeners and why?

A: My own of course! The A.R.K. Report, available on AMAZON/Kindle and on Breaking Israel News (if it’s in stock) at a promotional discount. You can also check it out on our website: www.arkreportfilm.com and contact me via our official Facebook ArkReport fanpage. It’s now released as the Advanced Readers Copy (pre-published version).
A shout out to a Charity you support:

For me, charity starts at home and with people you meet every day. There are so many in need in this country, kids. I’m into giving schools, cheders and yeshivot money for a fund that buys students basic things like shoes, tzitzit, even food for lunch, or a kollel fund that distributes challot and wine erev Shabbat for the avreichim. I like when it’s personal and on a small scale, where I see the faces – not donating necessarily to the big charities. I call it “smart chesed” – gemulut chassadim for the small guy who is often overlooked.

Are you enjoying this podcast? Please take 30 seconds and rate it on iTunes! Every 5 Stars helps us get more noticed!

To learn more about me, please check out Nachum.co

Thank you for listening!!