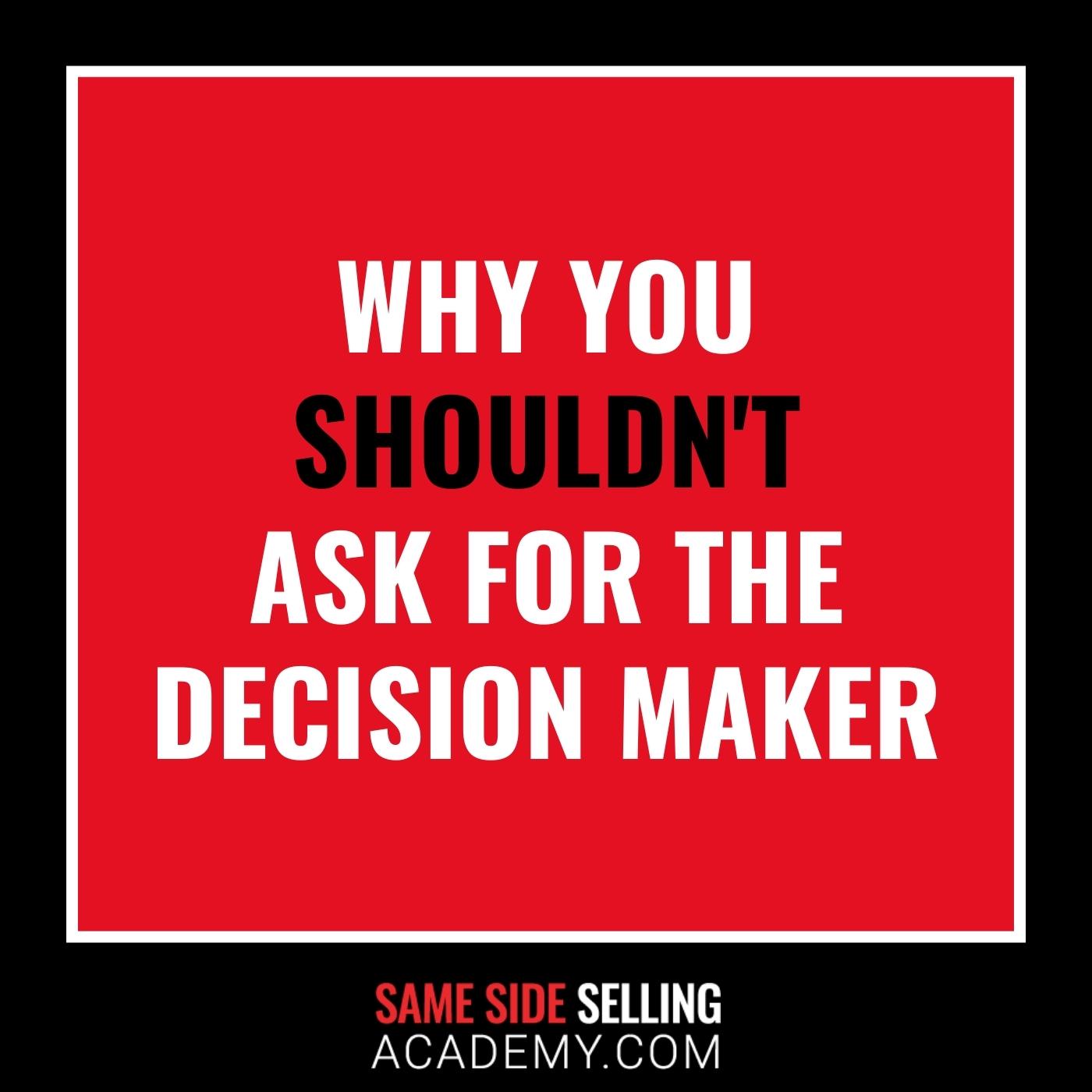 Welcome to the Same Side Selling Podcast. I'm your host, Ian Altman. I received a phone call earlier today that prompted me to record this episode. The individual called, and unlike most of us, when we see a call from something that's obviously a cold call, most people don't answer. I answer because I want to hear what people are being taught, and hopefully, I can share some information with you that might help you in your business. After I said, Hello, there was this pause, like, I can't believe I got a human being. And they said, Hi, I want to speak to the person in charge of buying copiers and printers in your company. So what's wrong with that? Well, for starters, I responded and said, Oh, it's illegal in our company to print things. In fact, anyone who prints anything is immediately terminated. Are you behind it? And then they hung up. But the point is not how I handled it and being a little bit flip. I was just having fun with it, but instead, what are the lessons that you can learn from this that can actually help you in your business.

What's wrong with asking for the person who makes the decision about X. Maybe you sell IT services, and you say, I want to speak with the person who makes the decision about IT services. When you do that, you're immediately making it about you and not about the customer. Because what you're conveying at that point is, I want to know the person to whom I can make a sale. You're not leading with what's in it for them. You're leading with what's in it for you. It's what I often refer to as axis displacement disorder. You believe the axis of the Earth has shifted, and the world now revolves around you.

So there are a couple of things that happen. When you ask a question like, who makes a decision about this? Can you direct me to the person who buys this? For starters, if you reach the person who actually has that responsibility, they're probably not gonna admit it because if they don't know you, they don't want to talk to you anyhow. Do your research! You could probably figure out from looking at the company's website or doing some research on LinkedIn who it is. So you're immediately just lazy, so I don't want to deal with you at that point. The second thing is that when you ask that sort of question, it's immediately adversarial. Because what's the alternative? The alternative is, look, I'm sure the company wouldn't entrust a decision like this to you, so who is it that makes the decision about X, Y, or Z? It's immediately adversarial, so you're almost never going to get a good response. Here's what we need to realize, though.

This individual wasn't born thinking of asking that question. The darn shame is that somebody taught them to ask this question. Someone said, here's what you're going to do. I want you to call up people, and when they answer the phone, I want you to ask, who makes a decision about copiers and printers? Trust me, it's a brilliant approach. That's what they've been taught. And now they're doing it. And this poor person is dealing with rejection after rejection after rejection because they don't have a better way to deal with it.

So how could they handle that instead? Well, they can start focusing on the problems that they solve really well, for people who need that. So that means that you have to do a little bit of research in advance, and you know what type of business you're calling into. So you're not just blindly calling people. Guess what? If you got their contact information, you probably also have their website. You can find out what type of business they are. So when you call, you can say, Oh, hi, so and so my name is Ian. I'm calling with this company, and when people reach out to us in your industry (you can specify the industry), it's usually because they're frustrated with their copiers and printers. It's either not doing this, or the costs are too high, or they're not reliable, or the quality isn't good enough. Does one of those stand out for you? Yeah, who's most directly impacted by that? Who's the person who has to deal with the most headaches associated with that? And now you're going to find out who the right person is. But you have to start by talking about the problems that you solve, not talking about what you want. You have to be more committed to the outcomes for the client, to solving something that's important for them than you do to actually making the sale.

Right now, when you call up and say, Hey, who's the decision maker about this? Who's responsible for this or that? Who buys this? Who purchases that? You're telegraphing that all you care about is the sale. And then you wonder why it's adversarial. So that old-school person is like, Listen, what you got to do is you call up, and you ask who the decision maker is. Guess what? Stop listening to that person. They're not helping you. They're not advancing your career or helping you achieve your goals in any way whatsoever.

Instead, what you want to do is lead with those problems you solve. But what does that mean? It means that you have to think about, intelligently, which markets are we calling into? You need to have discussions internally with sales and marketing that says, if I was someone who's running a law firm, if I was somebody who's running an enterprise software company if I was someone who's in this business or that business, what are the three most common problems that we're good at solving for that market? For someone in that role? For someone with these requirements, what are the problems that we solve better than anybody else?

And then, on a given day of the week, you say, I'm going to call the people in this market, this market or that market, and I'm going to have this set pattern that I go through with people. And I'm going to say, look, we can't necessarily help everybody. The people in your industry who reach out to us are usually facing one of these two or three problems. Does one of those ring a bell for you? Because if it's not, then there's really not much for us to talk about. And now people will probably lean in and say, oh, I want to learn a little bit more about that.

It's something that we covered in the Same Side Selling Academy in our Cold Outreach Playbook. It gives a whole formula for how do we deal with cold outreach, but the problem is, every time I'm on the receiving end of this cold outreach that is so poorly taught, it just makes me depressed. I feel bad for these people they have to deal with it.

So next time you're doing cold outreach, don't start with these pedestrian, awful approaches. Instead, connect by first doing research about what industry you're calling after, and what types of roles, who would be in charge of that in your ideal customer, and then spend time talking through what are the problems that we solve for those people and lead with the problems you solve, rather than what it is you're trying to sell.

If there are other topics you think would be helpful, just drop me a note to Ian@IanAltman.com and see you next time on the Same Side Selling Podcast.