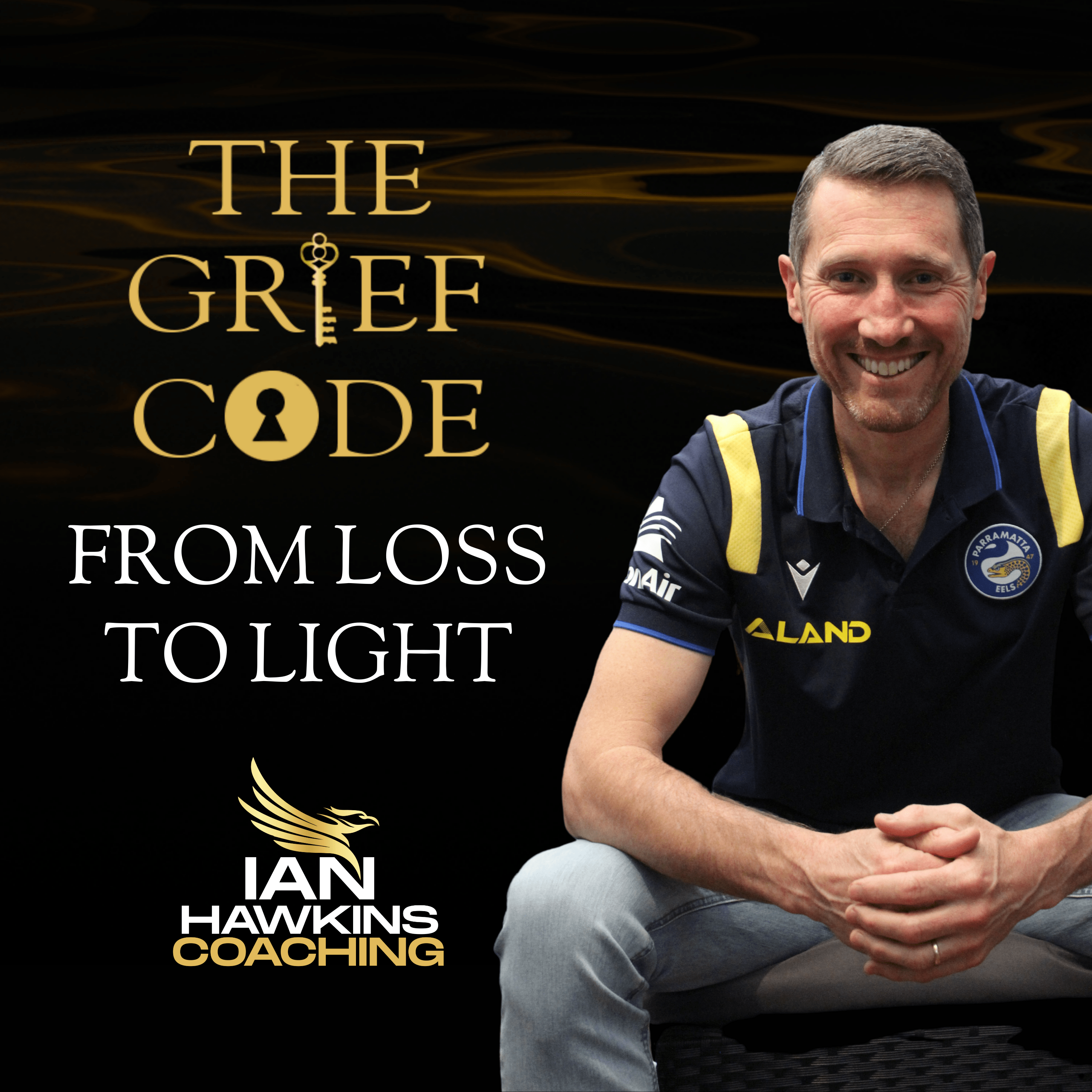 In this episode, Ian talks about how you've fallen into the trap of attempting to drive yourself into a state of happiness through self-love and other techniques that seem empty and unproductive.

Are you ready, ready to release internal pain to find confidence, clarity and direction for your future, to live a life of meaning, fulfilment and contribution, to trust your intuition again, but something's been holding you back, you've come to the right place. Welcome. I'm a Ian Hawkins, the host and founder of The Grief Code podcast. Together, let's heal your unresolved or unknown grief by unlocking your grief code. As you tune into each episode, you will receive insight into your own grief, how to eliminate it, and what to do next. Before we start by one request, if any new insights or awareness land with you during this episode, please send me an email at info at the and Hawkins coaching.com. And let me know what you found. I know the power of this work, I love to hear the impact these conversations have. Okay, let's get into it.

And everyone's having an awesome week. Things are going well for you also know that that's not always going to be the case and and stuffs gonna happen. And that's life, right? So what I want to share with you today is how you can actually make some changes around that. Particularly if you're in that place where trying to force yourself to be happy. Yeah, concept of like, oh, you know, share yourself with self love and all that stuff that seems really a bit too fluffy. And honestly, it doesn't get your results when you're forcing yourself to be happy when you're trying to push yourself and convince yourself you're something that you're not, it's actually a trap. It's a classic avoidance strategy from dealing with what's really going on. And often you're not even sure what's going on, which makes it even more difficult. So you push on, keep convincing yourself that everything's good. And you know, other people have got worse than me. And so you carry on. And what the avoidance plays out, as is things like distraction, procrastination, and the inability to reach those high performances that you've reached at other times. There are different times right? Where you where everything just seems to unfold. You're like, man, I was a great day. Why can I do that all the time. And part of it is because of this concept of trying to force happy of force positive of convincing yourself of something that's that's not really there. So what do we do about that? Well, actually, before we talk about what we can do about that, some of the other ways that it really plays out is that feeling of being unsatisfied of being unfulfilled. The more you force, the happy, the more you get that self doubt creeping in. And that just leaves you blaming yourself and feeling worse about yourself. So it really doesn't help. So what do we do about? Well, it's actually about dealing with what's really going on. So underneath the surface, when things aren't going great, is some frustration and some anger that we're not dealing with. So for the biggest stuff, so the things that really piss you off, that's easy, right? It's really clear. It's obvious, you tend to vent about it, you speak to someone, you get it all out of your system for the really big things. But it's that lower level stuff, the things that frustrate you and annoy you, and you just kind of go well, it's not that big deal. I'll just keep moving on. Yeah, like it's, you know, whatever. Just just let it go. But it's those things that are bottling up and causing you the biggest concerns. Because what happens is, it builds up, and it builds up and it builds up. And then when we have those moments where you're under pressure, maybe it's at home, in the family, maybe it's in competition, sporting field, maybe it's even watching sport, then it all bubbles to the surface and you just explode. And that's the thing that ends up causing your most concern, because then you spend time beating yourself up, like why can't I control the emotions? So how do we manage this lower level frustration. So it's taking the time to accept that it's there, acknowledge that it's there to then take steps to regulate. And the first thing we do is we breathe. How often when we're in that moments of tension, we just hold our breath. And we don't allow ourselves to stay calm, but we go straight to that fight flight or freeze response. So you bring in that breath, and then if you can make space for it, closing your eyes, allowing all that frustration to come to the surface. Allow yourself to feel it to see it and then and

act out anything you need to act out to release it, and I'm talking, punches screaming, and people, baseball bats flame throwers, the works, whatever it is to release this frustration that's building up. Because if you don't allow yourself to release it, at least in your mind, then those same feelings are gonna keep bubbling to the surface normal human emotions and reactions. They're valid reactions, and they are okay. It's about making that okay for yourself. So that you don't have to then explode later at a time where you don't want to. So allowing yourself to regulate it, and then that's going to actually create a whole shift in your body. Whereas instead of sitting there as something that's not helpful, it's going to shift into a different feeling into your body, which is when you're able to go and have those moments of getting things moving forward. Now, this is a training I've been taking my clients through, and the feedback I've been getting from them has been incredible in terms of the productivity, the success they're having in their day, and just how they're feeling better within themselves. Generally, it's been working awesome for me as well. It's now part of my daily routine. And it's something that I'm really looking forward to sharing with all of you, I'll be releasing in the next little while, I don't want to say time, because I can sometimes get things needing to be pushed back. But it's, it's a part of the Grief Code framework, which is going to show you how your body will be telling you different things going on and how you actually navigate that. So that you can release those things that are playing out, which just don't serve you anymore. So you can be able to start getting into more of those spaces where you're feeling like you're winning, feeling like you being successful and feeling like you're moving head with what you want in life. So I'm looking forward to sharing that with you. And also some training around this anger release anger repair process that I mentioned before. So if that's something you're interested in, let me know. Either drop me a note in the comments here or send me a message directly. And I'll let you know when that's available as soon as it's available, because it'll be coming out very soon. And looking forward to helping you shift from that place of unsatisfied unfulfilled of whatever else shows up for you procrastination, avoidance, whatever it is, so you can turn that into a fuel to power your day and get you heading in the right direction quickly. Have an awesome day. I'll speak to you soon.

I hope you enjoyed this episode of The Grief Code podcast. Thank you so much for listening. Please share it with a friend or family member that you know would benefit from hearing it too. If you are truly ready to heal your unresolved or unknown grief. Let's chat. Email me at info at Ian Hawkins coaching.com You can also stay connected with me by joining the Grief Code community at Ian Hawkins coaching.com forward slash The Grief Code and remember, so that I can help even more people to heal. Please subscribe and leave a review on your favourite podcast platform