Nick Modesti’s start in the automotive industry was at an early age. When Nick’s parents, John and Collette started the business in 1972, he spent a lot time around the shop during summers and after school. He wasn’t fascinated by the cars, but by the parts that they were made from. He enjoyed taking things apart and still does. To this day, he often takes things apart just to see what’s inside and to see if he can fix it. His dad had the same curiosity.

Started early.
Nick can’t say that it was his goal to be in this industry, but as he got older and needed to start making some money it was a natural place to start. During his teen years he began helping around the shop.  His dad started showing Nick some repairs like rebuilding Honda carburetors. He worked part time at the shop in high school and college.

Found his place.
For Nick, college wasn’t his cup of tea. He started working in the shop more on a full-time basis in the late 80’s.  He found himself in the role keeping the parts department in order and helping clients too. Nick eventually groomed into the role of service manager, right around the time that he was to marry his high school sweetheart.

Expansion.
In the mid to late 90’s Nick and his Dad built a new 9,000 sq ft building right across the street from their old shop. They moved in during 1999 and has been there since.

Trianing.
Modesti hired a business coach in the early part of the millennium and has participated in training with Gary Gunn, Elite Worldwide, ESI with Maylan Newton and Cecil Bullard with the Worldpac Smart Groups. 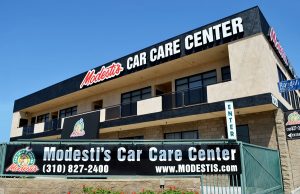 Family Generations.
It is truly a family business with Nick’s wife Christie who oversees marketing. His oldest daughter, Melanie,  is working part time as an assistant, and Nick’s son Nicholas is a part time apprentice with the technicians.

Philantropy.
His shop donates to Wounded Warriors as a way to thank and support our Veterans every year around Veterans Day . Modesti’s also donated office equipment to help the Los Angeles Rescue Mission where they feed and help the homeless to get them back on their feet.

What to listen for:

Nick shares his marketing efforts, his implementation of a DVI program, why having a business coach is one of his best decisions, how he bonuses his team for achieving training goals, and his peace of mind warranty program and much more.

Modesti’s Strong Culture.
It has always been Modesti’s goal to maintain 100% satisfaction with their clients. They teach their employees the value of doing business in a manner that will achieve satisfaction. The company’s policy is to never compromise integrity in parts or service or in any other way.

Modesti says, “We firmly believe that honesty is the best policy, and there is never any excuse to run an auto repair business otherwise. Our goal is to create an atmosphere where clients feel welcome and where they are given the best service and repair possible. We are like Cheers, where everyone knows your name”.