215 – Lowchen in Danger: Could be Extinct in our Lifetime | Pure Dog Talk

Rodriguez said that in 2015, only 18 litters of Lowchen were whelped in the US, with an average litter size of only three puppies. On its current path, the club estimates Lowchen could become extinct by 2044.

“Our numbers indicate only 37 percent of dogs in the U.S. contribute to the gene pool,” Rodriguez said. She added that the tight line breeding required to re-establish the breed following WWII is suspected to be the cause of the low litter numbers. Nonetheless they breed and whelp naturally. 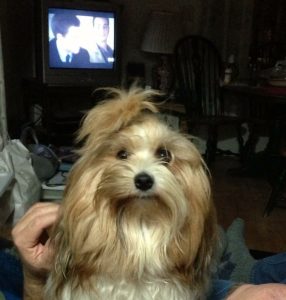 Dealer in his “Marvin the Martian” up-do, on the couch watching TV with his owner.

“The thing I love the most,” Rodriguez said, “is that Lowchen can be high level agility or performance dogs, and then they are just as happy to lay on the couch and snuggle for three days if you don’t want to do anything.”

“You can go tracking one day, and the next day, give them a bath and blow out, and they’re ready to go in the ring,” she added. “If a smooth coated Cane Corso person can handle it, most people can…”

In German, Lowchen means “little lion dog” so they were shaved in the shape of a lion, Rodriguez noted. The trim includes “bracelets” on all four legs, with each leg shaved about half way, the body shaved from the last rib back and the tail shaved about half way up. No scissoring is allowed.

“They are tie- dyed dogs,” Rodriguez noted. “They come in all colors. Sables even look like a lion.” 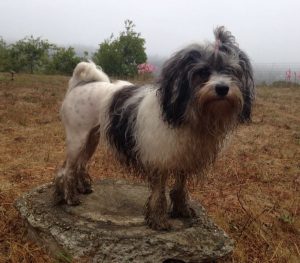 The luxurious coat is not all one texture of hair, Rodriquez said. “Parti colors tend to be a little more curly and cottony,” she added. “White coats are the most difficult and tend to mat. Blacks and sables tend to have more easy to manage coats.”

Legends of the Lowchen

The breed was developed in Germany. One legend has it, Rodriguez said, that if a knight was killed in battle, they put a lion on his tombstone. If he died at home, they’d put a Löwchen on the tombstone.

The breed was rumored to be a favorite of the ladies of European royalty because the dogs would attract fleas and keep them off the people.

Living with the Lowchen

Weighing about 15 pounds, the breed is easy to travel with, Rodriguez observed, and very healthy.

“As a breeder we test eyes, hips, knees. There are not many heart problems. We test for PRA,” she added. “Breeders in the breed are very open, and willingly and publicly share information.”

These healthy little dogs will often live 17 to 18 years, Rodriguez noted. They are resilient and not at all fragile. In fact, Rodriguez commented that they are phenomenal in agility, where they mostly compete in the 12” class.