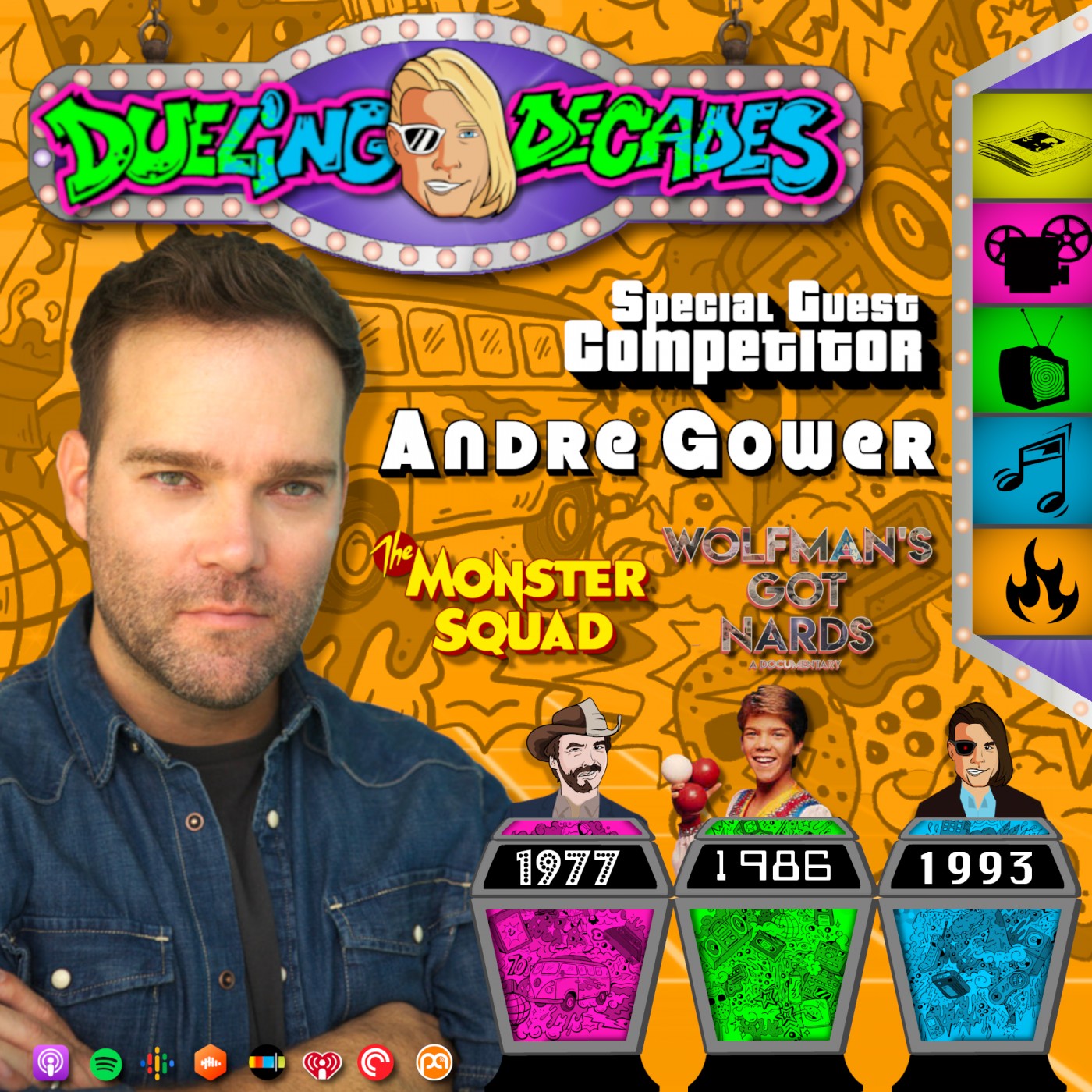 We're back with a special episode of Dueling Decades! It's one thing to ask one of our celebrity guest judges to part with an hour or two of their lives to deal with the Dueling Decades crew. Trust us, that in itself is a serious undertaking. When Monster Squad's Andre Gower joined Dueling Decades back in November as a guest judge, he told the crew he wanted to come back to play the game. Andre wasn't just being polite, he ACTUALLY showed up to compete! With that, Andre brushed up on the Dewey decimal system, dusted off his encyclopedia Britannicas, and brought the very best he could muster, from April 1986! Coming off a crushing loss last week, Mancrush looks to rebound with his second offering of April 1993. Rounding out the competition, holding up a peace sign, and smoking a doobie, Marc James is back with a righteous April of 1977. Oh wow, I forgot to tell you who the judge was! Our good friend from the Great White North, the future producer of the show, Joe Findlay steps behind the bench, and does an amazing job!

Important info to unpack here! No show next week! We're taking a vacation from research this week. Instead of researching, we will be working on the LIVE version of Dueling Decades! That's right, soon you will be able to see our ugly mugs live, and you'll be able to judge from the LIVE Twitch chat! So check the Twitch link below, and subscribe there so you don't miss our soft launch episode on April 7th (9pmEST)! https://www.twitch.tv/duelingdecades

Now, for THIS episode, you may hear something about: a piece of electronic equipment you can use to anchor a schooner, Mancrush unearths an unopened 28-year-old gem, Hildegard teaches Andre to juggle, home renovations gone awry, MacTaggert drops the feather duster, stupid people in love, cucking for a million bucks, backlot basketball with Woody Allen, being late isn't always a bad thing, honeybees around the fruit cage invade MTV, iconic 80s music videos, psychotic stalkers named Darrian, Rivera goes primetime, what you'd probably watch if you only had four channels, an iconic band goes on its final ride, the midnight Barbarian debuts, a regional sports network gets extremely brutal, the cold war, Wolfman's got nards, double-dipping dates, sweaty coke parties, huge mouths, and who is all going to the Mahoning Drive-in next month? All that, and much, much more!

Do you agree with Joe's rulings? Play at home and judge for yourself! While you're at it, send your rulings to our Facebook and pick up 20 points on the Dueling Decades Leaderboard!