Just remember this. GOD LOVES YOU...EVEN IF YOU'RE LGBTQIA! If you don't believe that, then you need to read this little book - Godly But Gay. Because you can be Godly But Gay! Just ask Joel Barrett, a conversation therapy dropout. He knows first-hand the challenge of try to hold God in your heart, and loving yourself and having room for both. In his newly released book Godly But Gay, Joel shares how he lived a life of fear and shame for over 30 years, until he came face to face with himself when he had an encounter with another closeted gay minister. As we kick off PRIDE Month, Joel gives us a glimpse into how you can love GOD and love YOURSELF, just as GOD would want you to. 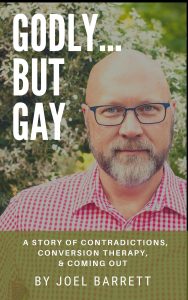 Joel Barrett of Joel Speaks Out is an LGBTQ Author, Speaker, and Gatherer. He is recognized for his honesty in sharing his story as a former Baptist pastor and survivor of ex-gay therapy. He has a unique ability to bring people together, and his message encourages everyone to challenge their fears and live with authenticity and transparency.

Joel is a regular guest expert on podcasts, news reports, and panel discussions. His story has been featured on StoryCorps, Risk!, The Daily Mail, and more. He is the co-author of Cultivating Culture Like a Garden: Reaping the Harvest of Diversity & Inclusion. His memoir Godly…But Gay is now available at JoelSpeaksOut.com

Castro
Take The UnApologetic Life Assessment! Get The Coming Out Without Coming Unglued Podcast Series!