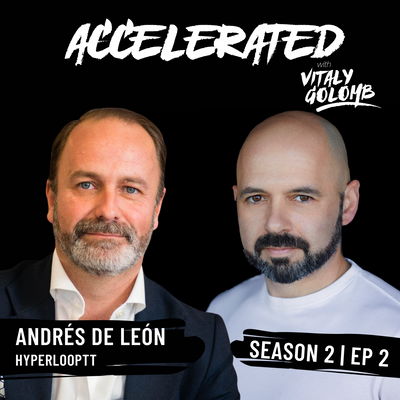 On this episode, I spoke with Andrés de León the CEO of Hyperloop Transportation Technologies. He first joined the company as its COO before taking the helm in 2019. Prior to Hyperloop he build an illustrious career leading many initiatives in energy and infrastructure.  We talked about how the crazy idea of Hyperloop became a full fledged industry, HyperloopTT’s unique crowd sourcing and business models, key technologies that has to be developed, and most importantly when we can get in a pod and hitch a ride at the speed of sound.

Known globally for his focused management style and creation of growth-oriented businesses within the infrastructure construction and alternative energy sectors, Andrés de León was appointed to the role of Chief Executive Officer in 2019. Previously, he had served as Chief Operations Officer for HyperloopTT for three years. Andrés de León brings 30 years of international experience as a senior executive in manufacturing, finance management, private/public business negotiation, and tax and audit supervision to HyperloopTT. Andrés has initiated and executed corporate affairs in Spain, Belgium, Portugal, France, Italy, Mexico, Chile, and the United States.

Castro
Sign up for my very first online course: "Pitching Like A Boss" Want to work together? Get in touch.