A smart listen with NAPA’s ASE Technician of the year 2013.

Why Listen? Harvest great ideas on customer retention, marketing, technician and adviser training, succession planning and the value of a business coach.

Humble Beginning
Garry Plimmer’s mechanical training began during his enlistment in the U. S. Navy from 1974-1978, having trained and served as a diesel mechanic.  After the Navy, Garry put his training to use working on John Deere Heavy Equipment (1978-1995).  He then went into the heavy truck repair and outfitting business for 2 years.

In 1997 Garry began his first business; “Industrial Tractor Parts” (used tractor parts). As he was trying to get that business off the ground, Garry began working on vehicles to supplement his income. He found that repairing cars from home provided well for his family and, in addition, was a help to friends and neighbors.

Big Move
In the summer of 1997, Garry rented a neighborhood repair shop and began his quest of automotive knowledge, training and growth potential.  He became a NAPA AutoCare Center in 2003 and has faithfully attended training offered and meetings, always asking lots of questions from other shop owners!!!  He says he has benefited greatly from owners willing to share with him.

Expansion
Gary was soon thinking about expanding to provide his customers a nicer place to visit and his employee team a better work facility.  Garry’s Automotive, Boise, ID, sales growth and the Idaho economy in general, were strong.  Gary investigated and attended classes through the SBA on growing a business, and  began to work on a business plan. He searched for and obtained proper financing and began looking for a place where he could expand.  Stepping out in faith, with his wife Jerilyn, they  purchased an acre of land on a busy street and began the task of designing and building a 4,400 square foot, 7 bay, building to suit their future needs.

Growing
The new facility opened in March of 2005.  Gary and Jerilyn scrambled to add additional team members to serve a much larger volume of customers. 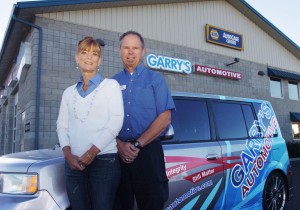 Gary and Jerilyn were invited to attend the “NAPA Expo” in Las Vegas.  They walked away with a million notes, and met a lot of shop owners with whom we discussed mutual challenges.

Certifications/Overview
Garry’s Automotive became a AAA Authorized Repair Center in 2005 and in 2008 they were recognized as an ASE Blue Seal Facility. Currently with $2 Million in sales serving 3,500 customers with a team of 5 ASE Certified Master Technicians, three service advisers and four support team members, Garry is proud of what his team accomplishes each day.

Philanthropy; giving back.
Garry’s says “yes” to many worthwhile organizations and people, such as The Boise Rescue Mission, which is his primary community partner. Plimmer also developed tests and served as a judge for the annual ‘Sills USA’ Automotive Service Technology Competition between 2008 – 2011.

Succession Plan
Garry strives, through his membership in the NAPA BDG Group and the RLO Training “Bottom Line Impact Group”, to improve his techniques and position in the market place. He began to hear about the value of setting a business succession plan into place and investigating the many different ways to do this. He and Jerilyn developed a plan to allow two of their team members to purchase the business in January of 2017.

This episode is brought to you by Federal-

Mogul Motorparts and Garage Gurus. With brands like Moog, Felpro, Wagner Brake, Champion, Sealed Power, FP Diesel and more, they’re the parts techs trust.  For serious technical training and support – online, onsite and on-demand – Garage Gurus is everything you need to know. Find out more at fmmotorparts.com  and fmgaragegurus.com