Pete Rudloff owner of Pete’s Garage in Newark, DE. Pete started out in the automotive trade as a machine shop apprentice and after a year became dealer tech and grew into a Mopar Gold  CMAT, L1, DEEP certified tech of which have been both the assistant shop foreman and foreman of a few local dealerships and was the lead tech at all but one of the dealerships ever employed at.

The Beginning
In 1999 with a business partner opened a performance/custom shop called R&S Kustumz in Wilmington, DE as a side business to his tech job. In 2001 R&S Kustumz was dissolved in favor of Pete’s Garage Inc. and a changed focus towards repair instead of custom work.

Focus On Training
In 2006 Pete started focusing on training to make himself a better technician; ultimately this resulted in the creation of a loose knit group called Delaware Training Group which is a group of technicians who desire to make themselves the best technician they can be. Rudloff is a strong advocate of proper tooling, proper training and will always push to raise the bar in the automotive trade as a whole. He is best described as a problem solver who fits well 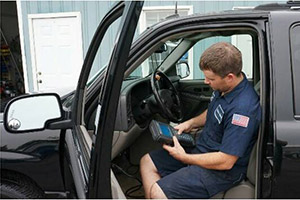 with difficult outside the box issues.

Working for Other Shop Owners
Pete prefers his shop to have a reputation as a ‘fix it shop’ and shy away from maintenance type work although he still does his share. He prefers dealing with problems of an electrical nature, and gets bored with general service work; in a perfect world, Pete would never do an oil change or transmission service again. Over 40 local shops take their diagnostic troubles to Pete to solve.

This episode is jammed with Pete’s brand of wisdom that you will find valuable.  Among others:

How he started Delaware Training Group. [10:50]

Writing articles for AutoInc Magazine called ‘Show Me The Fix’. [15:34]

How his OE Scan Tool Project grew into a very important industry tool. [10:04]

His work on creating mandatory minimum standards to create technician licensing in the state of Delaware and the reasons the aftermarket needs to be proactive with this inevitable regulation vs bureaucratic intervention. [18:59]

A very exciting technician apprentice program for any shop to implement.[29:42]

One of Pete’s articles mentioned by other podcast guests on ‘Cost Of Vehicle Ownership’ here.

This episode is brought to you by Federal-Mogul Motorparts and

Garage Gurus. With brands like Moog, Felpro, Wagner Brake, Champion, Sealed Power, FP Diesel and more, they’re the parts techs trust.  For serious technical training and support – online, onsite and on-demand – Garage Gurus is everything you need to know. Find out more at fmmotorparts.com  and fmgaragegurus.com