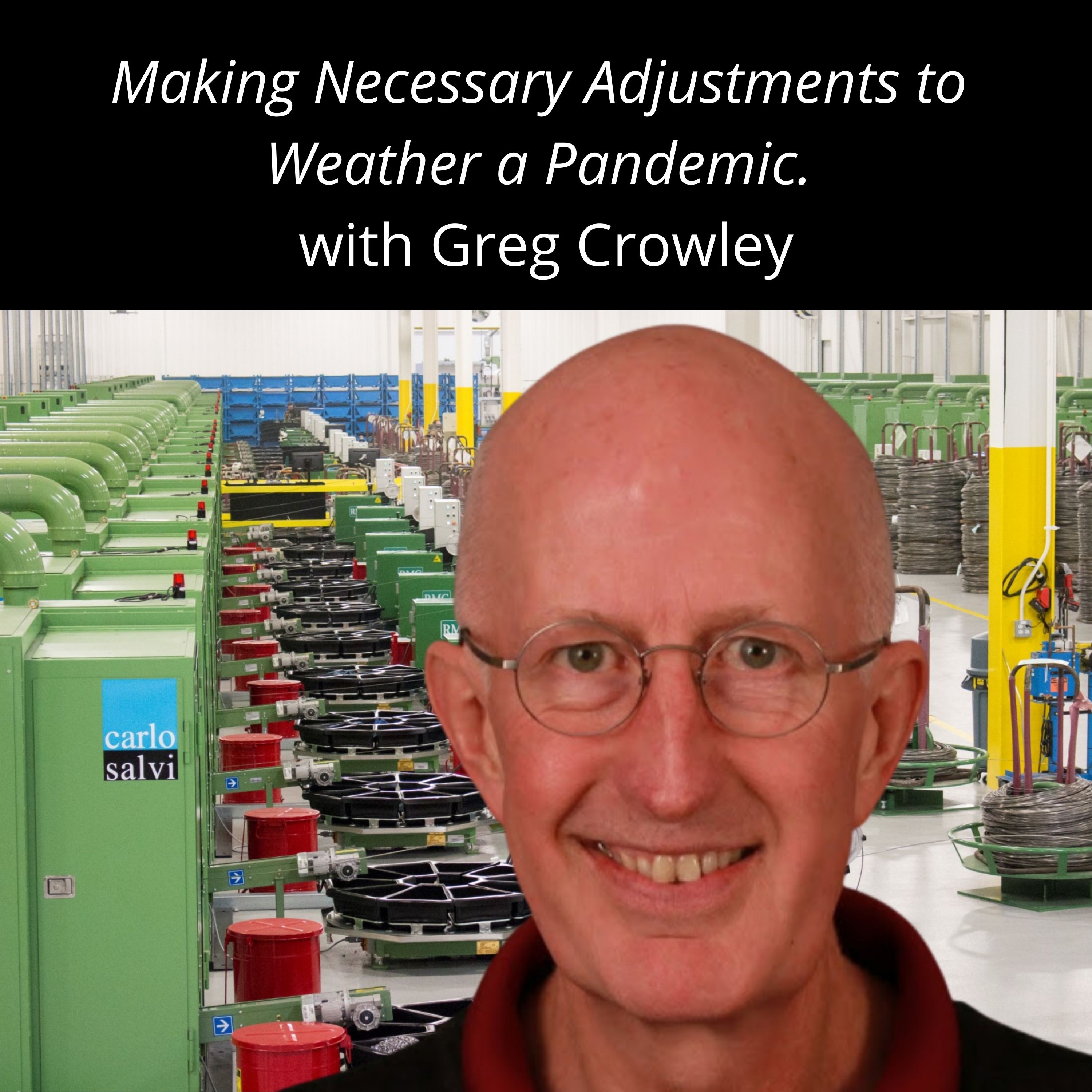 Lisa Ryan: Hey it's Lisa, Ryan. Welcome to the Manufacturers' Network podcast. I'm excited to introduce you to today's guest Greg Crowley. Greg is President of Rockford manufacturing. Greg, welcome to the show.

Greg Crowley: Thank you for having me.

Lisa Ryan: So share with us a little bit about your background. What led you to where you're at now with Rockford.

Greg Crowley: So Rockford manufacturing group is a small OEM with 40 to 50 people depending on the business level. I spent most of my career as an aerospace mechanical engineer with an MBA education. Four years ago, I switched to the wire fastener industry and took an opportunity to run a small company. So I'm originally from eastern Canada and have been in the States since 1997.

Lisa Ryan: Nice. So what with all of this craziness has been going on for the past year. What is it that's working as far as your people your processes, some of the good things that have that are going on or have happened?

Greg Crowley: Yep, it's, it's good to focus on the good things because there's so much downside these days with covid. On the positive side, we won a PPP loan, which helped us over the last maybe six, eight months. Our machinery is expensive, so people only want to buy it if they have to. But with this market what's working well is we had to downsize about 20% and that that was a little painful, but we did it only once. And since then, we've been keeping everybody in the building busy. We did reduce. So we didn't want to reduce more than that because when the market recovers. We did move to a 36-hour workweek, and all the salary people took a 10% pay cut, so that's helping us at least stay out of the red until business picks up. So the fact that we're keeping everybody busy is good. Nobody's looking for work in the building.

Lisa Ryan: It's so important when you have good people to be able to keep them right now because who knows who's going to be available when covid is in the rearview mirror, which can't come too soon. Were you finding that your employees could work remotely, or were they coming to the facility every day?

Greg Crowley: So most people in the office worked remotely when we're in Illinois, and it pretty conservative-run state. So when it first hit roughly in the March timeframe, that Illinois order came from the governor. We did have most of the office working at home, and we had a software tool called splash.com, which helped because people could use their home computers to tie into their work ones and do pretty much everything they do here.

So that helped for maybe four to six weeks, and then eventually everybody came back in the building. So the only time somebody will be off now is if they have positive covid test results or a spouse that now can do the work from home. So right now, everybody is in the building and healthy. So that's good. We did have a wave of covid hit us, no more than a couple of people at a time. But it went through pretty much the office and the shop.

Lisa Ryan: And so when that happened, did you reduce production when you had fewer people? How did you handle that?

Greg Crowley: Yeah, good question. It did impact production, but luckily, not to the point where we would slow down a customer's order. It would have been rare if it happened, but we had enough buffer in this system with the schedules to keep borders on track. If we lost a complete department, that would have been terrible, but we only lost one person from one department. So it wasn't like it brought us to a halt.

We did have an issue in the weld area, and to be safe, we went to outside suppliers to do some work for us. We needed to protect the schedule.

Lisa Ryan: It's been interesting having these different conversations as far as how people have dealt with that, and now with my husband's company, they schedule production based on who shows up for the day. So it's interesting because a year ago, you would have thought like, Wow, this is what we're making today and now that whole flexible mindset, which I've found where manufacturers have excelled of just being able to turn and figure it out. And so that's been one of the good things that have come. I think that a lot of companies found that they were much more flexible or could be much more flexible than they ever thought they could be

Greg Crowley: Yeah, our customers are understanding. Sometimes we get hung up with a supplier issue, and of course, we'll work with that supplier and try and do the best we can, but occasionally we will be hit by delays outside our control, but they haven't been significant.

Lisa Ryan: Right. So what are some of the main things that are keeping you up at night?

Greg Crowley: While we're small in terms of employees, we're not big enough to have a full-time HR person, so that that role falls onto a few of us in the building. That tends to be a time sink at times. And it's not so much only being profitable, but trying to get through each month without losing money. Those are probably the two most stressful parts at the moment. We're an infrastructure set up for roughly 50 to 60 people, so we normally have a lot more. We normally have 30% more business on average than we have today. So, we need to keep business flowing into the building. We wouldn't be able to jump back to normal overnight, but it'd be nice to see the vaccine giving people confidence in their businesses to start ordering capital equipment. I think that's coming. The forecast experts are saying that will happen this year, mostly in the second half. But so the ramp-up will be gradual.

Lisa Ryan: So, are your salespeople still going into the customer shops? How has that your method of sales changed in the last year?

Greg Crowley: So we have representatives all over the world. They're all reporting into the building. And I know a lot of them have been working from home telephone video calls. The only time customers want to see us is when there's a new machine installed. We had one recently go to Belarus which is between Poland and Russia. And it took a while. But we finally got somebody over there. When or if there are technical support issues, then customers are willing to have people from the company and visit. But in general, our customers don't want to see salespeople. We had a couple of customers come into the building recently, but we've only had maybe two or three in the last six months. Typically it's once a week. Travel is way down. Run the industry, the trade shows we support, and the industry groups. They're pretty much on hold. Our big show was postponed until this last December, and then they finally cancel that. So our next big trade shows in in the fall. It's been pushed out to the fall

Lisa Ryan: I've seen a lot of the bigger events have just outright canceled. Some of them have gone online. Thankfully, the technology is getting a lot easier to use as far as being virtual events. However, there's still the education process as far as letting people know that we can do virtual. It allows you to bring more people to the event than you may have been able to do if it was live. There's give and take, but there's still certainly a lot of education going on in those lines. So from a networking standpoint, if there was any support or connection that you would like to learn from other manufacturing colleagues, what, what would that be?

Greg Crowley: I'm a fan of networking in general. I network with a few presidents of companies in this area for not in the industry, mostly workforce related. We help each other out. And then I'm part of the IFI group, which you've spoken to a couple of times. And that's great for networking within a fastener industry. And then the third one is a group called Vistage it's a group of companies that I network with and listen to speakers like yourself. It's good to share with them and be able to find out lessons learned on nearside so anything from leadership to HR issues to coaching senior staff.

Lisa Ryan: Well, that's the nice thing about Vistage and some of these other groups when you're looking outside the industry. Instead of always focusing in house, we sometimes have those blinders on that. I'm sure that from your Vistage peers, you've probably learned a lot from industries that are completely different from yours can work equally well.

Greg Crowley: Yeah, and then a lot of it is transferable. It's one thing I realized up front was our strategy was developing a strategy. I hit multiple cultures in the building. When I first got here, I knew I better work on the culture first, so I ended up selecting a program that worked well for us with networking help. We're still using it, and it takes time to change cultures, so we're on the right track there. And so that's just one. One example of finding a suitable tool for us.

Lisa Ryan: If people wanted to reach out and connect with you and maybe gain some of your insight, what areas can be supportive of other manufacturing and industry colleagues?

Greg Crowley: On the technical side, I'd say we're on the wire equipment, wire processing. Our machines either straighten and cut wire for dishwasher racks, concrete industry, automotive, the dog cages - there's all kinds of different needs for the wire. On the fastener side is the people that make nuts and bolts are drying machines. They're used in front of headers, a lot of headers in the Cleveland area. So anything technical like we've got a strong engineering team. I could answer questions that help out that way.

Anything general, I'd be happy to help anybody who's got a company with roughly 50 employees who have a question. I'd be happy to share my view, and I'd love to be able to ask other companies questions too.

Lisa Ryan: Awesome. Well, what's the best way for people to get ahold of you.

Greg Crowley: And I'd say, email.

Lisa Ryan: Well, Greg. It's been an absolute pleasure having a conversation with you today. Thank you so much for joining me today.

Greg Crowley: Yes, thank you for letting me take part. I look forward to seeing others.

Lisa Ryan: This is Lisa Ryan, and this is the Manufacturers' Network. See you next time.