“IT HAD A COMPLETELY DIFFERENT SOUND, AND WENT STRAIGHT AS A BULLET. I THOUGHT SOMEONE ELSE ON THE RANGE HAD HIT THAT GOLF BALL." 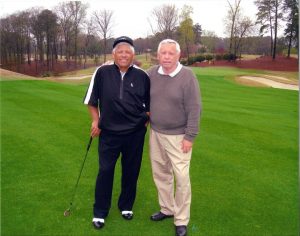 In any type of profession, there are individuals who are not always in the spotlight, but who are very well-known and recognized by the insiders of that profession, as being the most reliable sources of information and guidance.

They are the voices of authority who the very best in that business or field of study often turn to for guidance and inspiration. They are the pro’s pros. The trusted advisors. The "Yodas" who have the wisdom, earned over many years, necessary to tell successful people what they are doing wrong, and how fix it.

Over the past 40 years, David Lee has earned that reputation and that level of respect in the world of golf. But don’t take my word for it. Here are some quotes from three golfing legends:

Here are just a few highlight’s of David’s career.

Based on his unique swing theory, David and his son Daniel continue to conduct Gravity Golf schools around the country, and offer a wide range of in-person and online instruction.

On the start of his golf career: “My grandfather, who was a golf fanatic, got me started when I was 4 years old, swinging a club in his living room. He taught me using "Ben Hogan's Five Fundamental of Modern Golf," when it was a series in Sports Illustrated, before it was a book."

On his golfing hero: “Arnold Palmer, who was 14 years my senior, was like a god to me. Everything that he radiated made me think 'I want to be like you.'"

On his PGA Tour experience: “It was tough back then, entering as a PGA member. There would sometimes be 200 guys competing on a Monday for 4 openings in that week's tournament."

On discovering the "Gravity Golf" swing: “It was the first time in my life when my core mass beat my arms to the golf ball. It had a completely different sound and went straight as a bullet. I thought someone else on the range had hit the golf ball."

On why it took so long to refine his swing theory: “I could see that there was a different timing in Jack Nicklaus' swing, but it took me a long time to discover the "counter fall." I could not see was that he deflected to an off-vertical position before he dropped his hands to start his downswing."

On why golf is such a hard game to master: Golf is difficult because people can look at a golf swing and not distinguish between the art and the science of that swing. That's why the game has been a mystery for more than 500 years.