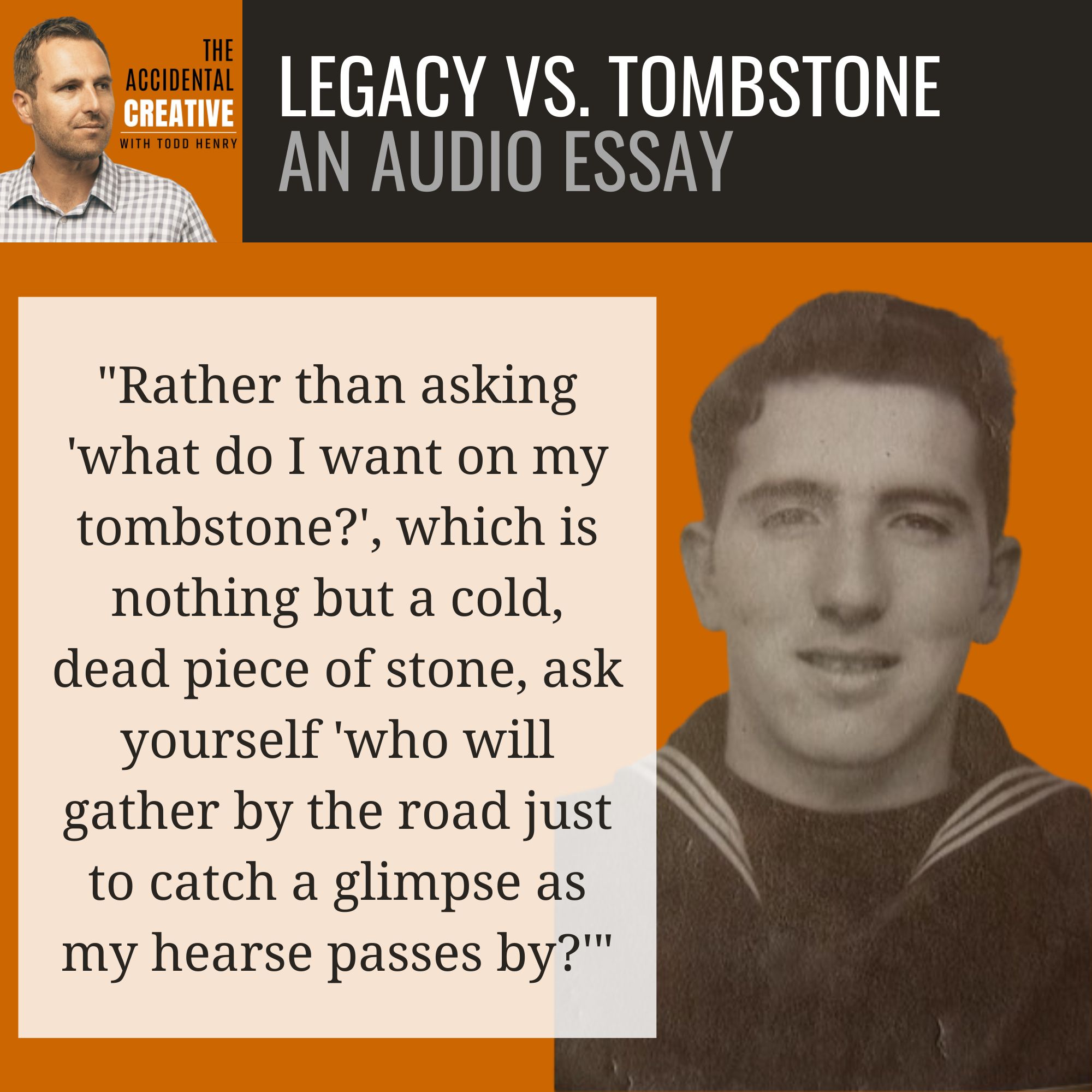 I was nine years old when my grandfather died. I still remember the funeral, not really understanding exactly what was happening, but knowing that I wasn’t going to get the chance ever again to throw football with, watch cartoons with, or make something cool with him ever again. Ever. That’s a tough concept for a nine year old to grasp.

After the funeral, we all filed to our cars for the procession to the cemetery. It seemed like we were barely creeping along, through our small town, around a corner, and up a hill to make our way out to the small country church where he was to be buried. As we turned the corner I saw – in the distance – some curious activity on the side of the road. It looked like a crowd had gathered to watch a parade, but it wasn’t a holiday. At the time it seemed like hundreds of people, though I now realize it was probably more like a few dozen. As we neared the crowd, my parents had difficulty containing their emotion. I noticed that many of the people gathered on the side of the road had removed their hats and were holding them over their heart. Others were simply standing at attention, paying one final tribute to my grandfather.

After we passed the crowd, I asked my father “Dad, who were those people?”

My father replied, “That was Pennington Bakery, son. Your Grandpa worked there every day for thirty years. He was the hardest worker I’ve ever known.”

My grandfather didn’t have a college education. When he graduated from high school in 1945 he immediately enlisted in the Navy and was sent to the Pacific. Upon returning he married my grandmother, and after a few other jobs, landed at the bakery. He wasn’t a formally trained electrician, yet according to my father he wired the entire bakery and did many things that would make engineers scratch their heads in wonder. (And probably things that he couldn’t get away with today!)

Everyone who knew him would testify that he set the bar for excellence. He demanded a lot of others, and of himself. He poured himself fully into whatever he was doing, whether that meant his job, his family, or as a volunteer coach of many sports teams over the course of his life. Even as he was ravaged with late-stage cancer, he never complained as he joyfully helped me complete a woodworking project and went about life as usual. His final concerns, as expressed to my father, were not about himself or the pain he was experiencing, but about ensuring that his many outstanding commitments to others would be covered. My grandfather’s grave marker is very simple, with no fancy epitaphs. If you’d have asked him what he wanted on his tombstone, he would have laughed at you.

His legacy wasn’t his work at the bakery, and wasn’t his service in the navy, or any of the other things he dedicated his life to.

His legacy was people.

My children never met my grandfather, yet in many ways they see him daily. I was deeply shaped and informed by his patience, his work ethic, and his entrepreneurial drive. They see him in me. I am part of his legacy.

So what does this mean to us?

Leadership and legacy are not just what you do, but also how you do it. It will be determined by a series of choices you make over your life about how to spend this moment – here, and now. The challenging thing is that each moment feels like a throwaway, because another one follows closely on its heels. How you choose to engage here and now speaks more to your character than whatever residual stuff you leave in your trail.

Rather than asking “what do I want on my tombstone?”, which is nothing but a cold, dead piece of stone, ask yourself “who will gather by the road just to catch a glimpse as my hearse passes by?”

Who will you impact so deeply that they will continue your work even after you are gone?

Who will you challenge to up their game, to be better than they are?

Who will you irreversibly impact?

Who will you stand in the gap to defend?

That, friends, is the stuff that lasting legacies are made of.

With the NordPass Business password manager, you will save time and energy – allowing your team to focus on what matters most. See NordPass Business in action now with a 3-month free trial at nordpass.com/accidental with code ACCIDENTAL.

50Pros.com is the newest & fastest-growing platform that connects agencies with top companies, many from the Fortune 500 - like Amazon, Spotify, and 3M. Curated, vetted, and a no-noise directory of the only the top 50 firms within 50 categories. Visit 50Pros.com.