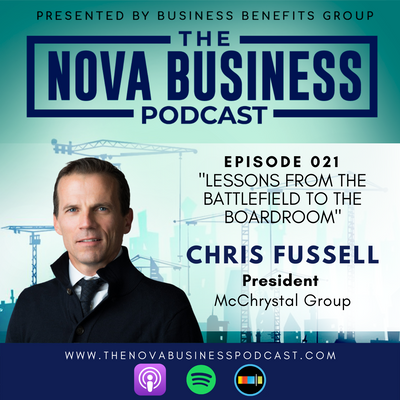 Lessons from the Battlefield to the Boardroom with Chris Fussell, President of the McChrystal Group

Chris Fussell is a Partner at the McChrystal Group. He is the author of One Mission: How Leaders Build a Team of Teams, and a co-author of the New York Times bestseller Team of Teams, the first book in the series. He was commissioned as a Naval Officer in 1997 and spent the next 15 years on U.S. Navy SEAL Teams around the globe. He then served as Aide-de-Camp to Lieutenant General Stanley McChrystal during McChrystal’s final year commanding a Joint Special Operations Task Force fighting Al Qaeda around the globe.

Since leaving active duty in 2012, Fussell has also served as a Senior Fellow for National Security at New America, sits on the Board of Directors for the Navy SEAL Foundation, is a life member of the Council on Foreign Relations, and teaches at Yale University’s Jackson Institute. He lives in Washington, D.C. with his family.

Chris co-hosts the No Turning Back Podcast with Stan McChrystal. They have interviewed leaders like Doug McMillon, CEO of Walmart; Simon Sinek, Author & Speaker; and Molly Joseph, CEO of UnitedHealth Group.

Overcast
This podcast is sponsored by The Business Benefits Group