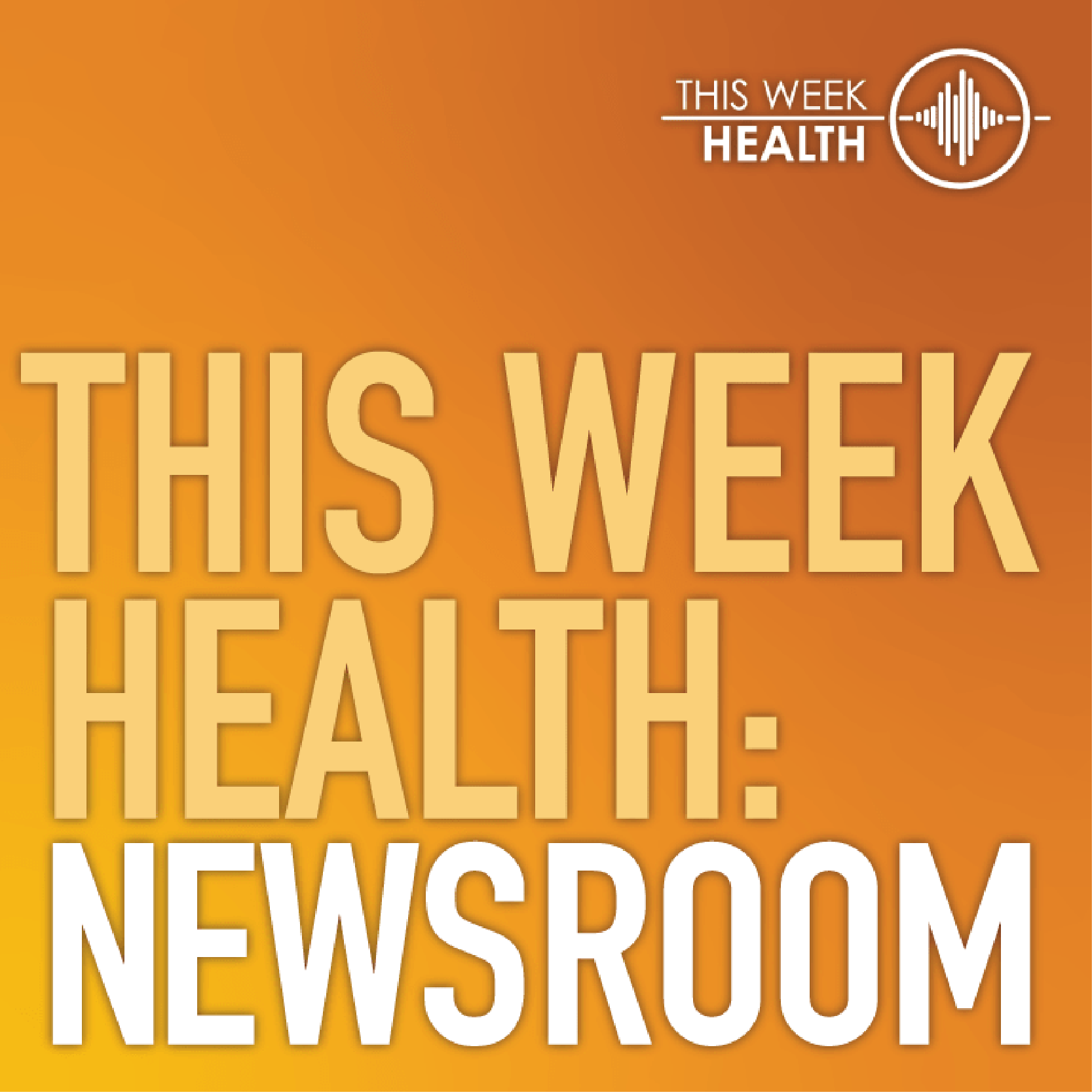 Today in health, it we're going to run through the headlines. It's actually chime week and I'm going to be really busy doing interviews. I think we're doing. We have 20 interviews already set up on the calendar and I'm just going to be busy. So I'm going to try to put together two shows ahead of time for Tuesday and Wednesday, we have our Monday news station, which will come out.

And then starting Thursday, I'll probably give you some updates on what I heard a chime. If you are looking for the interviews and action, you're going to want to subscribe to the, this week health community channel.

As those are conversations with leaders from our community. And so we decided to put them over there. And along with that, you'll get to hear the great interviews that people from the community are doing with each other. So I'd love to have you check that out this week. Health community look for wherever you listen to podcasts. All right. My name is bill Russell. I'm a former CIO for a 16 hospital system.

And creator of this week health, a set of channels, dedicated to keeping health it staff current and engaged. We want to thank our show sponsors who are investing in developing the next generation of health leaders. Accordion dynamics, Quill health Taos site. Nuance Canon medical and current health. Check them out at this week. health.com/today.

I do this every now and then it's kind of fun. The, , let's see Becker's hospital review since, , what is this 15 stories? Wow. I'm not going to cover all 15, but I'll cover the highlights. Number one, Kaiser Permanente reports $1.5 billion Q3 loss. Now it's important when you read these things.

And, , all right, so that's not an operating loss. What does that tell us? It tells us essentially that Kaiser's business model is pretty sound. They are weathering the storm better than most. As we have seen operating losses in excess of, at my gosh. You know, hundreds, hundreds, and hundreds of millions of dollars.

And so their operating losses are nothing compared to their overall. , revenue. Alright, next one, respect staff or, or seek care elsewhere. Mass general Brigham and ACS patient code of conduct. All right. The policy makes clear that words or actions that are disrespectful, racist, discriminatory.

Hostile or harassing will not be tolerated. The health system said examples of intolerable behavior include offensive comments about a person's race accent. Religion, gender sexual orientation, or other personal traits refusing to see. A clinician or other staff member based on personal Physical or verbal assaults.

Threats sexual or vulgar words and actions and disrupting another patient's care or experience. If we believe you have violated the conduct, you will be given a chance to explain your point of view. Mass General's code of conduct. Webpage says some violations will result in patients being asked to make a plan for future non-emergency care elsewhere.

Though we expect this will be rare. The hospital system said just if we, as we have policies for our employees and clinicians to treat each other with every patient and visitor with courtesy and respect, this policy Define appropriate behaviors for patients. This makes perfect sense. You know, if you walk into a Walmart and start, espousing racial slurs and.

It's our mission to treat our community and. , part of that is taking this abuse. It's not part of this. , And obviously emergency care, you take care of the person,

but, , Outside of You just don't get to walk into places and cause that kind of disruption. So like the policy makes sense. It's good to get it on paper and have everyone know about it ahead of time. All right. What's the next one at hospitals where nurse called 9 1 1 0 candidates interviewing for ed roles says the president. So this happened in Washington state.

And I don't know the complete details, but this makes perfect sense to me that if we're not going to provide a safe environment for , Our clinicians in the ed. We shouldn't expect people to be lining up out the door for, , spots to work in that location. And that is a that's difficult. That's on the health system to provide that safe environment, which is along the lines of the previous story we just talked about.

, let's see. 70% of hospitals say their relationship with payers. Are getting worse. Again, some of this stuff's outside of my swim lane, we generally just talk about the intersection of technology and healthcare. But when I run through these articles, a lot of times they are about healthcare in general, not necessarily healthcare and technology.

But, , we're going to cover this. Anyway. Hospitals are growing increasingly frustrated with payers, a survey from the American hospital association found. Not a shock. The survey published November 2nd includes responses from 772 hospitals of those surveyed. 70% said their relationship with commercial

Is getting worse. It's getting worse. How could it get any worse anyway, around one in five reported their relationships have stayed the same and less than 1% said they were getting better. That's a small percentage. In addition to publishing the survey results, they ha sent a letter to the HHS secretary.

And, , Martin Walsh, urging greater, , oversight of payers during open enrollment. Of the hospital surveys, 84% said the cost of complying with insurer policies is increasing and 95% reported increases. In staff time spent seeking prior authorization , approval and a news release. Ha president Rick Pollack said the survey results show some,

payers deny care to patients. Patients deserve comprehensive health With the protections they were promised when they signed up. Congress and the administration need to act now to hold commercial insurers accountable for actions that delay patient care contribute to clinician burnout and workforce shortages.

And increased costs. , , he's not wrong. , if you talk to clinicians, one of their biggest frustrations is prior authorizations. It's having somebody on the other end of the line. Who's not a physician and saying, Hey, we don't think that procedure is really necessary. And I've talked to some doctors who have to personally get on the phone after waiting for about an hour. They finally get to somebody who's a clinician and they say luck.

, or we're both clinicians here. This is what's presenting. This is what needs to happen. And the clinician on the other line goes. Yeah. Yeah, that's right. That's that's fine. But think about that process. This is an awful process. So, , it's not surprising to me that it's getting worse. It can't get worse, though. It's part of your business model.

So we have to seek ways to meet in the middle and figure out a way to streamline the prior authorizations. If both parties agree. That is a challenge. Then, , then we have to seek those ways as far as it depends on us. To create a better environment all around. I don't know. , but regardless hospitals cannot have a worsening relationship with their payers because that's who pays. There you go. , let's see.

New York city physicians seek union recognition way outside my swim lane, Texas health CEO out after four months. I'm sure there's this specific story to that one, but the, , the CEO Exodus does continue in healthcare. A lot of CEO's got organizations through the pandemic.

, maybe extended their retirement date a little bit, just to see their health system through that challenging And have moved on since then. , let's see. I don't know, this one seems interesting against still outside my swim lane. , do you not see this as an arms race? Cigna CEO question?

On M and a activity. , Let's see, what was his response? I think your framing is quite important. I wouldn't call it an arms race. I would call it stepping back. He said, I'd like you to think about it in a multi-pronged approach as opposed to M and a yes or no. Mr. Cardone a distinguished three key pieces of the companies.

At growth strategy, organic investments, venture capital, and M, and a specifically he's discussed internal investments and things like Pathwell data and analysis and clinical quality. Along with partnerships with innovative outside companies, we were being quite open to M and a, we don't deem it to be a silver bullet.

And then there's a few more down here as well. There's a Q and a with elevates health first health equity officer. There's a unity point, spins off three hospitals to a, another entity patients. Hospital-wide more likely to die when ed is overcrowded. That was a study that was done. And common flu drug in high demand.

, so anyway, these are the things I look at every morning when I come in, I generally get a handful , Of these emails, this one modern healthcare's digital arm, and a couple of other things like this and review them. See if there's anything interesting. , it takes me, only a couple of minutes to read, make sure there's nothing in there that I need to know about and need to share. And then we go from there. So

If you know, someone that might benefit from our channel, please forward them a note. They can subscribe on our website this week. health.com. Or wherever you listen to podcasts, apple, Google, overcast, Spotify, Stitcher. You get the picture. We are everywhere. We want to thank our channel sponsors or investing in our mission to develop the next generation of

Gordian dynamics, Quill health Taos. So  Site nuance canon medical and 📍 current health check them out at this week health.com/today. thanks for listening that's all for now