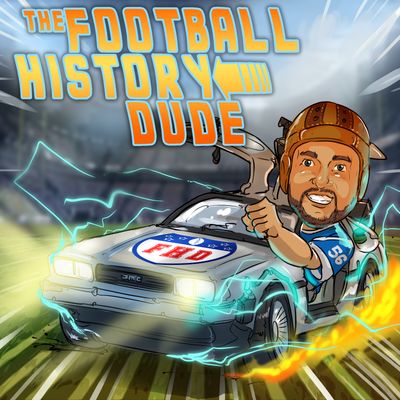 This episode we fire up the DeLorean and head back to October 15, 1899, the first game in Arizona Cardinals history.  Wait a tick.  That doesn't sound right, does it?  Well, the thing is, the Arizona Cardinals are the oldest franchise in the NFL.  However, they were previously the St. Louis Cardinals, and before that, they were the Chicago Cardinals.  Going even further back, they were the Racine Cardinals.  Let's just say there's a long history concerning the oldest franchise in the NFL, and this episode takes us back to the beginning in Chicago with a guest riding shotgun with us.  Joe Ziemba is our guest, and he is one of the world's most knowledgeable people about the early history of the Chicago Cardinals.  This first part of the interview takes from the beginning of the Cardinals through the beginning of World War II.

Here you can find the dedicated Joe Ziemba page.

Joe has spent many years learning about the history of the Arizona/St. Louis/Chicago/Racine Cardinals (oh, so many names).  The thing that sparked his interest was finding out his dad was drafted by the Cardinals back in the 40s, but the crazy thing is he never found out about this until his father passed away.  This led to him ultimately writing 2 books, When Football Was Football: The Chicago Cardinals and the Birth of the NFL and Cadets, Canons, and Legends: The Football History of Morgan Park Military Academy.

Note - As an affiliate, I earn a commission on qualifying purchases.

This book is the topic of the interview.  Joe learned his father was drafted by the Cardinals after his dad passed away, so it sparked a natural curiosity to learn more about the oldest franchise in the NFL.  Now we get to learn from all of Joe's research.  However, Joe said this book is no longer in print, so all the books you will see on Amazon are used copies.

Joe describes the history of the Academy football program from the humble beginnings in 1893 through its final season as Morgan Park Military academy in 1958.  He had an inside track on the information game because his dad was the head coach in the 1940s and 1950s.  The description states how his dad "uncovered numerous forgotten incidents from the past."  One such incident was in the 1900 season.  Students were so happy with a victory they ended up burning down a campus building.  This reminds me of what the city of Detroit will look like when we finally win our Super Bowl.