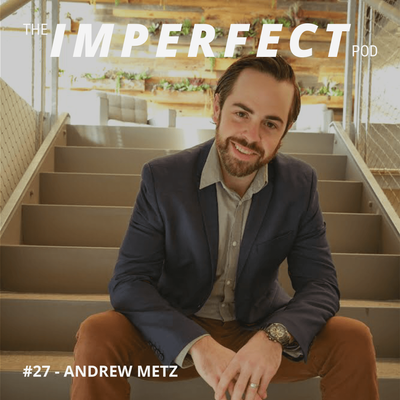 Drinking and alcohol intake can often be seen as a taboo topic. Binge drinking, over indulgence, and debauchery are typically what we think is "too much". But what if you're just having casual drinks everyday? Is that such a bad thing? For Andrew, it's not that it was bad, but he realized that it wasn't serving him. There are many reasons he quit alcohol: Health and well being, realizing it wasn't pushing him towards his goals, but the large picture was that he realized that his kids were watching his every move. As such, he decided to quite once and for all.

For Andrew, it wasn't really a long process. He read a book and within a few days and made the decision to stop drinking. There were awkward moments along the way including fear of judgement from his friends, being in a sales culture where that behaviour can be encouraged, and even growing up in Milwaukee culture which is heavily influenced by the beer industry. But he decided to stick with his guns and document his journey of quitting alcohol.

In our conversation we talk about his grandfathers impact on his life, why he chose to quit alcohol, fatherhood, what leadership is, and how anyone can take active steps to take a step beyond their vice.

In a little over a decade Andrew Metz has risen from an entry level lead generation position to vice president, overseeing all new business generation and a team of 30 at a SaaS based InsureTech company in Milwaukee, WI.  Andrew’s tremendous hard work, desire for continuous learning and improvement, generosity and humility have earned him recognition as a catalyst for growth within his organization. Metz invests in the people around him and inspires and encourages them to attain their own personal bests. His willingness to share the early lessons of his business career and personal mistakes make him a remarkable public speaker.  His abilities have resulted in regular speaking requests from UWM’s Lubar School of Business, Marquette University’s School of Communication and local high schools. His generosity and accomplishments post-graduation from UW-Milwaukee has earned him “Graduate of the Last Decade” award from his alma mater.  Metz is active on LinkedIn always sharing personal and business lessons through humor and entertaining story telling.

You can connect with Andrew on LinkedIn or through his website!

And as allows, if you want to see tidbits of the show, feel free to follow me on IG @theimperfectpod. This episode was recorded on video so you will get to see some exclusive video content there!