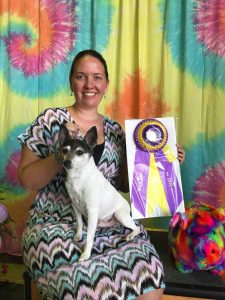 Cheryl Krajcar with one of her handling clients.

On the chain gang

“I remember, as a little girl, being drug to FT, winding up on the “chain gang” (stake outs for field trial dogs) after getting in trouble for turning dogs loose,” Krajcar said with a laugh. “I decided I wanted nothing to do with that and went to dog shows with my aunt.”

After years handling dogs for others, living with a rough Collie, Flat Coated Retrievers and more, Krajcar found herself full-circle, back at horseback field trials. Today she is a licensed field trial judge, owns Shelties and is using her computer programming skills to create this in-depth resource, Showdogz.org. 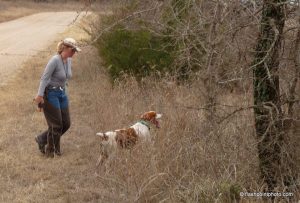 “It’s time to bring people together as a community,” Krajcar said. “I love what the kennel clubs around the world do… AKC, CKC, FCI, The Kennel Club. They all have tremendous resources. But there is no place where the entire sport can come, get together, and be involved. This website allows the worldwide community of dog people to come together to support the efforts of their kennel clubs.”

There are plenty of groups on social media, Krajcar noted, but they don’t meet the needs of the fanciers because there is too much unpleasantness. And not everyone is on Facebook.

“The cattiness is out there. Let’s make it friendly, let’s build the community that people want to be a part of,” Krajcar said. “There’s something for everyone.”

“I really want to focus on the owners,” Krajcar said. “There are no good dogs without good owners. Owners are the ones breaking their backs, putting dogs out in the community. They are the ones supporting the events.”

Fully translatable chat rooms for worldwide conversation on Showdogz.org allows people around the world to visit, find mentors, find dogs or reach out to rescue and more.

People buy the dogs they can find

“We have all these doodles, mixes, being advertised in the newspaper and on Craigslist,” Krajcar said. “That’s the only thing people can find when they’re looking for a dog. What are they going to buy? They’re gonna buy what’s available.”

The site also includes an emphasis on juniors and mentors.

“Juniors are the backbone of the sport. They are the next generation,” Krajcar said. “I made my own way, but I had a lot of people that came along to support me. Participating in juniors gives kids such advantage in the world.”

Advertising opportunities on the site for breeders, show dogs, artists and more are priced to keep them at a realistic price point.

“It’s not about money,” Krajcar noted. “It’s about what I want to do for the sport, which is bring everybody back together. Social media is tearing us apart. I want to provide a resource for everyone.”

Stick around to listen to Allison Foley’s Tip of the Week from the Leading Edge Dog Show Academy. Allison gives us a run down on Dry Shampoo and its many uses prepping for the show ring.