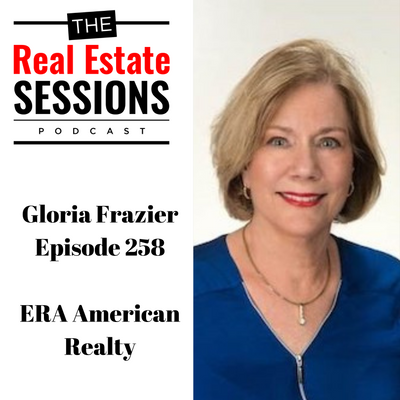 Today, our guest breaks the record for the broker-owners interviewed on the show being the first broker-owner who has owned their brokerage for almost 40 years! Joining us is Gloria Frazier, the broker-owner of ERA American Real Estate residing in the Florida Panhandle of Destin and Fort Walton Beach area. Gloria has built a trusted base of agents to handle all aspects of real estate and rental management in the Northwestern part of Florida.

In this episode, join Gloria and me to hear how Gloria has grown a successful brokerage that she has owned and operated since 1981. We also discuss some of the exciting things that Gloria has done in her life before real estate!

"We know going in that we're going to make a sizable investment of time and money with each person that comes to us. We look for people who want to make a commitment to the business. We also know how many transactions it takes for the typical agent here to say, 'I am making a living in real estate.' For us, it's about twenty-four transactions with our average sales price. If the person is willing to do the work, apply themselves, and do all those things in the beginning that have to be done because you don't have referrals, we get behind them 100% and help them get to those twenty-four transactions." – Gloria Frazier [22:54]

"I mean they're everything [relationships]. You don't get new business without good relationships; you don't keep business without good relationships. You don't keep good agents without those. A few years ago, we spiffed up our mission statement and our values. Our mission statement is 'changing lives through real estate.' It does, when somebody walks through our door to become an agent, hopefully, we are changing their life for the better. When that agent sells a house, lists a house, hopefully the outcome is what the person wants to have, and they feel their life has been enhanced because of something we gave them." – Gloria Frazier [25:24]

[12:09] Why Gloria Settled in the Florida Panhandle

[20:13] Opinions on Methods and Business Models

[25:06] How Critical Relationship Are in Real Estate

Joining us today is Gloria Frasier, broker-owner of the ERA American Real Estate in Northwestern Florida. Born and raised in Los Angeles, California, Gloria graduated from Pepperdine University in downtown LA with a Bachelor of Arts in Sociology. After college, Gloria had the fortunate opportunity to experience Europe and decided to live her twenties in Germany.

The goal was to become bilingual and accent-free and then return to the U.S. for a Master's in German to teach at the college level. Instead, she stayed in Germany when it was very much post-war Germany from the mid-sixties to mid-seventies. Gloria worked many exciting jobs, such as working at a home for unwed mothers' children to teaching English to Germans. While in Germany, Gloria even started a band, The Horizons, where she played bass guitar for over thirty years, mostly playing country and lounge music covers.

After residing in Germany for eleven years, Gloria moved back to the United States and decided to make the Florida Panhandle her home over forty-four years ago. Having grown up on the west coast with access to the ocean anytime, coming back to the United States, Gloria loved having the view of the sea again. After working many interesting jobs back in Germany, Gloria found real estate through a friend who convinced her to get her real estate license and get into the business together.

Gloria worked for her first brokerage agency for three and a half years. Still, an opportunity arose to jumpstart her business, and within a week, the opportunity had already opened the doors to her brokerage, American Real Estate. Gloria decided to partner up with ERA just three weeks after opening the company as they offered training, referrals and were and still are a major growing franchise. Gloria shares that she loves ERA because it has so much heart, and it not just all business.

Having been in the business for almost forty years, Gloria Frasier has hired several agents. For Gloria, an agent is a good fit when the agent wants to commit to the business and is willing to work. Gloria takes it on as a personal responsibility to set agents up to not fail and reach their full potential. Gloria Frasier's advice to new agents is to be prepared to do the hard work of prospecting, following up, and prospecting some more!