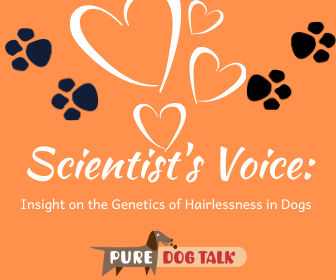 402 – Insight on the Genetics of Hairlessness in Dogs

Insight on the Genetics of Hairlessness in Dogs

Adam Boyko, Chief science officer and co-founder of Embark, joins host Laura Reeves to talk about the Fox I3 gene, that causes hairlessness in many dog breeds.

“So it's a gene that's gonna be involved in what we would call ecto dermal differentiation,” Boyko said. “So it's going to affect a lot of tissues that are in the ectoderm. Not just hair follicle formation but also things like the inner ear or the sweat glands or dentition. All of these things that are related because they're coming from the same developmental tissue.”

“(Some of) my colleagues worked on it. This was before I got into dog genetics. I was graduating from Purdue with a degree in biology but I was studying butterflies at the time. So I didn't join the dog field until after we had a genome. I switched because there's so much more cool stuff you can do with an organism that has a genome and particularly with dogs.

“In 2008 (researchers) were able to identify the gene that's different between dogs that are hairless and dogs that aren't. This Fox I3 gene. The mutation itself is just this insertion of seven base pairs. Remember, the genome is like 2 1/2 billion base pairs. So that little mutation then is the difference between whether the dog has hair or doesn't.

“One of the projects I started out with … we call the village dog project. Most of the dogs in the world aren't purebred dogs and they're not even mixed breed dogs the way you and I think of mixed breed dogs. They're actually natural populations of dogs that have been around for thousands of years and probably have some really interesting biology. If you look at village dogs across the new world, you do occasionally come across dogs that carry this mutation and have the hairless phenotype. If you look at dogs that have a very, very similar sequence, so that the same genetic background but don't have the mutation, these are the closest relatives for where the mutation occurred for dogs that don't have the mutation. It's actually like Alaskan Huskies and other northern dogs that are very puffy, puffy dogs, but they have DNA still in them that pre-Columbian Native American dogs had.

“Genetically you get the signature that this is a mutation that arose in the new world before European contact and this is the basis for Mexican hairlessness right so the Xolo, the Peruvian Inca Orchids, as well as the Chinese Crested.

“This mutation is actually lethal. A dog with two copies of the mutation dies in utero. So, every hairless dog has one copy of the broken Fox I3 gene and one good copy of the Fox I3 gene.

“The “powder puff” have better dentition. This Fox I3 mutation not only effects the development of hair follicles and interrupts them throughout most of the body, but the dentition is also affected. The teeth, both the deciduous teeth and the permanent teeth, generally you don't see as many developed, they're not as well formed, they tend to be more conical, they're a little more tusk like, they point out a bit more. These are all kind of developmental defects. The powder puff doesn't have these defects, not because it has a better Fox I3 gene that you want to breed in, it just doesn't have the broken one.”

“I think ultimately the purpose is that people really like unique and distinctive dogs,” Boyko said. “You have this mutation which has a dominant effect, so as soon as it arose that dog was hairless. And it arose in an environment where people thought that this was a sacred dog or a dog that they wanted to have around.”

“A uniquely New World breed, the Xoloitzcuintli stands out for being hairless, although there is a coated variety. The Xoloitzcuintli was one of the earliest breeds to be added to the American Kennel Club studbook – in 1887 under the name “Mexican Hairless”. This is a robust and healthy breed that evolved in the primitive jungles of Colima, Mexico. Archaeological evidence has been found in the tombs of the Colima, Mayan, Toltec, Zapoteca, and Aztec Indians dating the breed to over 3500 years ago. Long regarded as guardians and protectors, the indigenous peoples believed that the Xolo would safeguard the home from evil spirits as well as intruders. In ancient times the Xolos were often sacrificed and then buried with their owners to act as guide to the soul on its journey to the underworld. These dogs were considered a great delicacy, and were consumed for sacrificial ceremonies – including marriages and funerals.

The name Xoloitzcuintli (pronounced “sho-low-itz-queent-li”) is derived from the name of the Aztec god Xolotl and Itzcuintli, the Aztec word for dog. (Xolo owners are frequently stopped and find themselves explaining not just the breed – but teaching people how to pronounce the name!) Indigenous peoples believed them to have healing powers and they were thought to bring relief from a vast variety of ailments. That belief still survives today in the rural parts of Mexico. One of the reasons being that they feel warm to the touch – and can actually act as a “hot water bottle”.”

“Gene mutations happen accidentally,” Boyko said. “They happen randomly. Then they are perpetuated because they serve a purpose evolutionarily. Because dogs are domesticated and people can selectively breed them and selectively protect them and provision them, you'll get mutations like this that really would disappear rather quickly if it happened in a wild population. If you had a hairless Wolf that didn't have good teeth, it wouldn't last long. It's not going to survive to adulthood and reproduce.”

Be sure to check back next week for our conversation with Xolo breeders and enthusiasts.