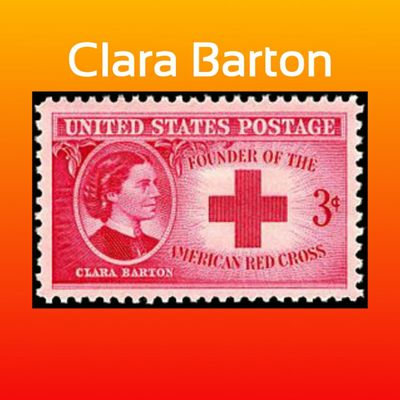 Clara Barton was born on December 25, 1821, in North Oxford, Massachusetts. Her father was Captain Stephen Barton, a member of the local militia and a selectman who inspired his daughter with patriotism and a broad humanitarian interest.[2] He was a soldier under the command of General Anthony Wayne in his crusade against the Indians in the northwest. He was also the leader of progressive thought in the Oxford village area.[4] Barton's mother was Sarah Stone Barton.

When she was three years old, Barton was sent to school with her brother Stephen, where she excelled in reading and spelling. At school, she became close friends with Nancy Fitts; she is the only known friend Barton had as a child due to her extreme timidity.[5]

When Barton was ten years old, she assigned herself the task of nursing her brother David back to health after he fell from the roof of a barn and received a severe head injury. She learned how to distribute the prescribed medication to her brother, as well as how to place leeches on his body to bleed him (a standard treatment at this time). She continued to care for David long after doctors had given up. He made a full recovery.[5]

Her parents tried to help cure her timidity by enrolling her to Colonel Stones High School, but their strategy turned out to be a catastrophe.[6] Barton became more timid and depressed and would not eat. She was brought back home to regain her health.

Upon her return, her family relocated to help a family member: a paternal cousin of Clara's had died and left his wife with four children and a farm. The house that the Barton family was to live in needed to be painted and repaired.[5] Barton was persistent in offering assistance, much to the gratitude of her family. After the work was done, Barton was at a loss because she had nothing else to help with, to not feel like a burden to her family.[6]

She began to play with her male cousins and, to their surprise, she was good at keeping up with such activities as horseback riding. It was not until after she had injured herself that Barton's mother began to question her playing with the boys. Barton's mother decided she should focus on more feminine skills. She invited one of Clara's female cousins over to help develop her femininity. From her cousin, she gained proper social skills as well.[7]

To assist Barton with overcoming her shyness, her parents persuaded her to become a schoolteacher.[8] She achieved her first teacher's certificate in 1839, at only 17 years old. This profession interested Barton greatly and helped motivate her; she ended up conducting an effective redistricting campaign that allowed the children of workers to receive an education. Successful projects such as this gave Barton the confidence needed when she demanded equal pay for teaching.