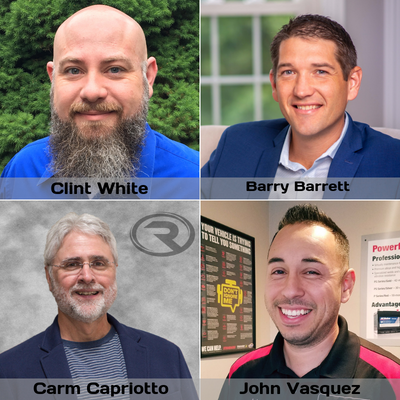 Clint White holds the ASE Master Tech, Under Car Specialist, & Service Writer Certifications. He started wrenching in 1995 and landed his first job via BBB chat room connection. Clint moved on to manage & tech at Midas and then at an independent shop. He moved to Idaho to get away from the overcrowded West Coast and worked as a Chevrolet/Cadillac tech.

Next, he managed another independent in Meridian Idaho.  While there, the owner of the business sent me to shop owners training through RLO and ATI 2-3 times a year and he also took it upon himself, at the same time, to attend Bible College full time for 2 years and become a licensed Pastor (talk about being stretched!!!).  His fire was lit !!

Clint found out quickly he has a passion to OWN his own shop and a passion to TRAIN/TEACH people. His world was rocked when his father (also a Pastor) was diagnosed with Parkinson’s, Prostate Cancer, had neck surgery and a knee replacement all within a short span of time. Clint moved home to spend time with his Dad. It was a tough choice to leave what he had in Idaho but for him, family must come first.

Clint now manages one of two shops owned by a shop owner he teched with way back in the day.  Coopers Auto Repair Specialists in Tacoma, WA.  Listen to Clint’s previous episodes HERE.

Barry Barrett is an authority on sales and selling. He is the Director of Training for RLO. Barry’s sales and training capabilities operate at full capacity in his dual roles as the lead salesperson and service manager trainer.

During Barry’s career as a Service Manager and top salesperson, he honed his talents in communicating with people.

Barry is tireless in his pursuit of excellence in the automotive industry and in all that he does. His passion for providing tools to train owners and their teams to the next level is unlimited. Barry is a Ziglar Legacy Certified Coach. Listen to Barry’s previous episodes HERE.

John Vasquez is the Shop Manager and Service Advisor at Los Gatos Auto Service since 2006. As a child, John was always into cars. That love never went away and he thought that the automotive industry would be a good place to start his career. He first worked in a parts department for a local distributor, then moved on to detailing vehicles at a Volkswagen dealership. After about a year and a half, he worked his way up to valet, then greeter and finally, service advisor which he really enjoyed and just confirmed for him that he had picked the right career path. He enjoys spending important time with his wife and daughter. If he is not watching the Niners, Warriors or Giants, you’ll find John enjoying some delicious food and/or taking in a movie.

#2. The service writer is calling back a customer with a 2008 Toyota Highlander with over 200k miles.
Customer: Clint     Service Advisor: Barry      Observer/Coach: John

When they brought the vehicle in, it was running poorly and they were very open about the fact they had done little to no maintenance to the vehicle  Upon inspection it was found it needed over $4000 worth of repairs just to make it safe and reliable, not to mention a few other maintenance issues that could be deferred for a few months.  The tension in this scenario is very much a daily one in real life…..How do you sell a large repair on a vehicle that “blue book’s” for less than the needed repairs?

The savvy customer has already viewed his DVI and has already called the dealer parts dept to get a “list price” on the needed Powertrain Control Module (PCM) for his 2016 Dodge Grand Caravan.  The rub on this one is the need to sell parts with the appropriate markup/margin to be able to stand behind the warranty on the repair….