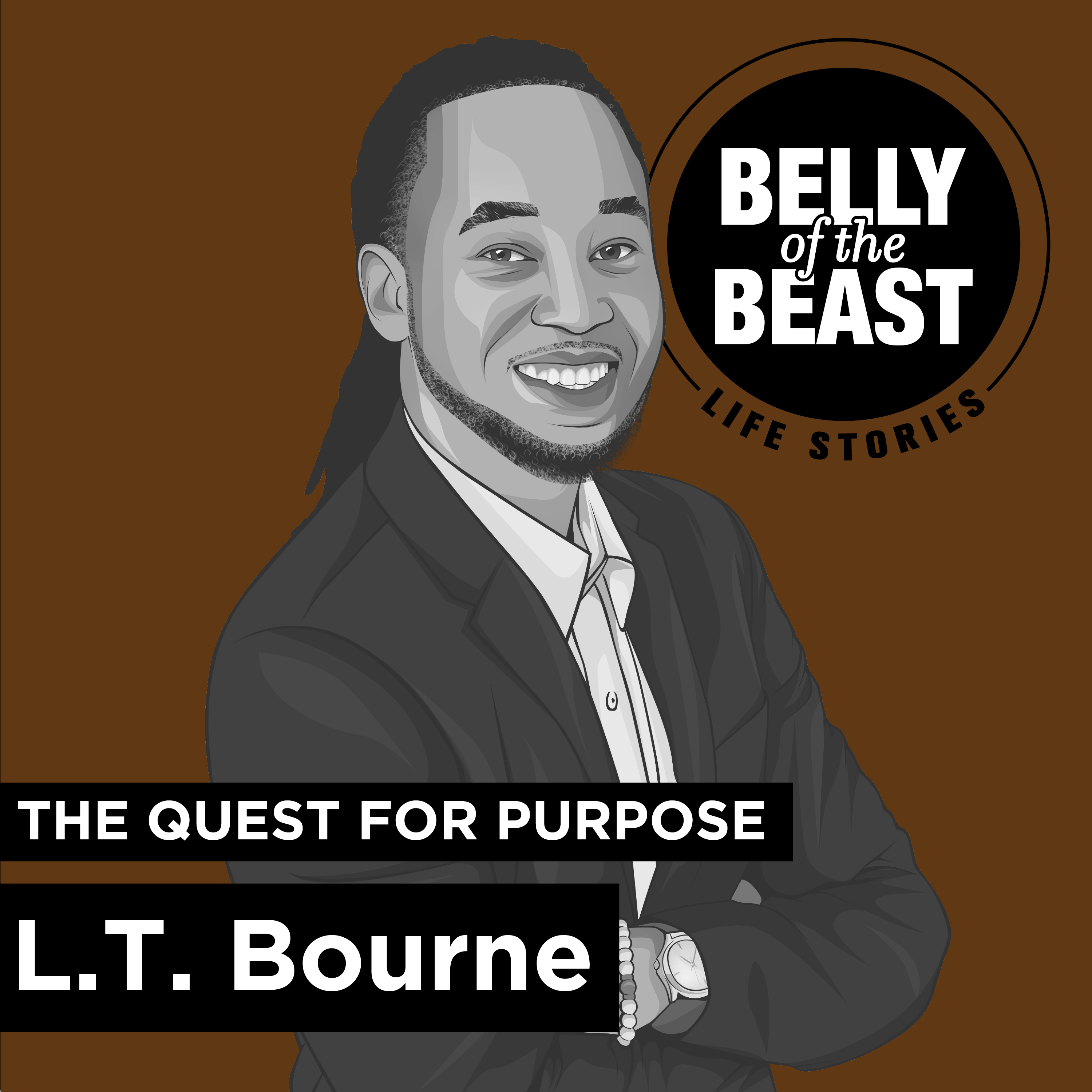 As with so many children in the world today, Leonardo Lightbourne (L.T. Bourne) grew up with an absent father. Watching from the window as his father drove away left L.T. feeling confused and heartbroken. As he grew, he became a people-pleaser, trying to win the favor of others so that they wouldn’t abandon him. This led to a lack of boundaries and some bad decisions.

Thankfully, L.T.’s best friend’s father served as a mentor and a positive influence in his life. Without his encouragement and guidance, L.T. is doubtful that he would be where he is today.

Upon completing university, he struggled to find employment...for months. He felt like a failure. During this low point of his life, L.T. began journaling, realized that he was suffering from parental abandonment issues, and he determined to work through them.

From there, his book, It’s Not a Man’s World: How I conquered the Sins of My Father, was born.

L.T.’s journey is full of lessons about boundaries, surrender, forgiveness, and empowerment. His story is a message of hope, of embracing your life right where you are, and of taking responsibility for your own narrative, no matter how rocky your start may have been.

Hey there, welcome to Season 3 of Belly of the Beast Life Stories. I’m David All.

It’s another season of life here at the podcast. This third season is a very rare collection of stories by men who share the golden thread of growing up with an absent biological father and broke the pattern to be a good man. I’ll be sharing my own Belly story later this season. And let me tell you that a year ago, when we launched this show, I didn’t realize this was my Belly story.

Wisdom for our Soul -- Courage for your Journey. Extraordinary life stories illustrate the nature of personal transformation. A change that forced us down into the dark, gooey stage of life where we found our purpose and climbed up a new person.

Our podcast has a purpose — a mission to heal, inspire and shape lives with extraordinary life stories. Stand with us — Visit BellyStory.com to share your story, listen and subscribe, sign-up for episode updates and chip-in, and enable our mission.

- L.T. remembers the day his father left. He was just a child. There was an argument with his grandmother; his mother was crying; and then his father drove away as L.T. watched from the window.

- He knew his father was only 10 minutes away, yet he never came to visit.

- L.T. felt like he must have done something wrong. This led to him developing a people-pleasing personality.

- Watching family sitcoms on TV showed L.T. that he was missing something in his life, that something was lacking in his family structure.

- Father’s Day was especially difficult. Having to go to church and witness the celebration of happy father-child relationships was like pouring salt in a wound.

- His own birthday was difficult to celebrate too. He felt like his birth must have been a mistake. Why should he celebrate his parents’ mistake?

- Thankfully, L.T.’s best friend had an intact family, and his friend’s father became a mentor and father-figure to L.T.. He nurtured and encouraged L.T.. He even let him sit in on some lectures he gave his own son.

- After university, it would be months before L.T. would land a job. He felt like a failure.

- During that time of unemployment, L.T. started journaling. Through his writings, he recognized he had parental rejection issues he needed to work through. The book idea was born.

- Writing his story helped L.T. drop the people-pleasing. Telling his story “gave me back my power as a man.”

- Wisdom comes through pain. And telling our stories liberates us from the pain.

- When L.T. was able to surrender to the present moment, he was able to let go of the past.

- L.T. realized that holding onto resentment was an act of insanity. - Forgiving his father allowed him to live a free, happier life.

- We don’t get a manual on how to do life, and we’re going to make mistakes. We’re going to hurt people as we’re trying to figure things out. We need to forgive one another so that we can all keep moving forward in our development.

- No matter what your background, whether you had an involved father or not, you can control the narrative of your life.

- L.T. now embraces his journey and recognizes that his rough start just makes victory that much sweeter.

“I had the fear of if I love somebody, then they're going to up and leave the minute I make a mistake or the minute I do something.”

“Mentorship is a phenomenal thing. It has reaped so many benefits in my life...If that figure wasn't there, I don't think I would be in this position I am today...I definitely would have fallen victim to the environment that I was in.”

“Because I didn't feel worthy of love, I always felt like I needed to win people's love in my life. So I would always be the person you call, and I'm always there. I'm always available. I always want to go above and beyond for you because I didn't feel worthy… People would interpret this as being someone who is dedicated, who is committed, who is hardworking, but deep down, that wasn't who I was. I was suppressing my insecurities of feeling not worthy.”

“Writing a book gave me a voice of speaking and not worrying about what other people thought of me. I was able to be vulnerable. I was able to express myself in a way that I've never expressed myself before. And that destroyed the whole people-pleasing mindset and attitude… I'm not doing things to be accepted anymore. I'm telling my story because I want to be liberated. I want to live a life of not holding on to pain and regret. That moment of telling my story gave me back my power as a man.”

“It just seemed like an act of insanity to be angry at my father's decision. That has already been made. But what am I going to do now about it?”

“Forgiving my father and learning how to develop a strong perception of why he left allowed me to live a free, happier life. It allowed me to love him for him and not his actions because I was able to see his actions as a product of the way he was raised and his environment as opposed to the person that he was.”

“An individual who has fully accepted himself, who has fully loved himself will never hurt you. They will always love you because they have come to peace with who they are.”

“When they show you hurt, show them love. Show them what they're missing in their lives so that one day that would gain some insight or they will have a revelation, or they will gain some introspection.”

“Respond to hurt and hate with love, and you will always win in the end.”

“Are you going to rise up and be victorious? Or are you going to fall down and play the victim? It's your choice — victor or victim. It's entirely in your hand.”

“I know now that to whom much is given, much is required, and that the strongest soldiers usually get the hardest battles and the hardest fight. And so I embrace that knowing that God has given me a strength that is far beyond the average human being, to carry emotional trauma and overcome emotional trauma and now be a beacon of wisdom to others.”

→ LEARN MORE ABOUT OUR GUEST

- It’s Not a Man’s World: How I Conquered the Sins of My Father by L.T. Bourne (on Amazon)

Your podcast is a sacred space and judgment free zone. It's free of advertising and outside influence -- 100% listener supported.

A podcast where you can feel safe to listen and know that you're not alone. Transformation is scary, but not a single butterfly has ever attempted to climb back into the cocoon.

To keep us advertising free and support our mission to heal, inspire and shape lives with extraordinary personal life stories, chip-in $5 a month at BellyStory.com/support.

To submit your story, sign-up for new episode emails, contact us or support our mission with a donation, visit: