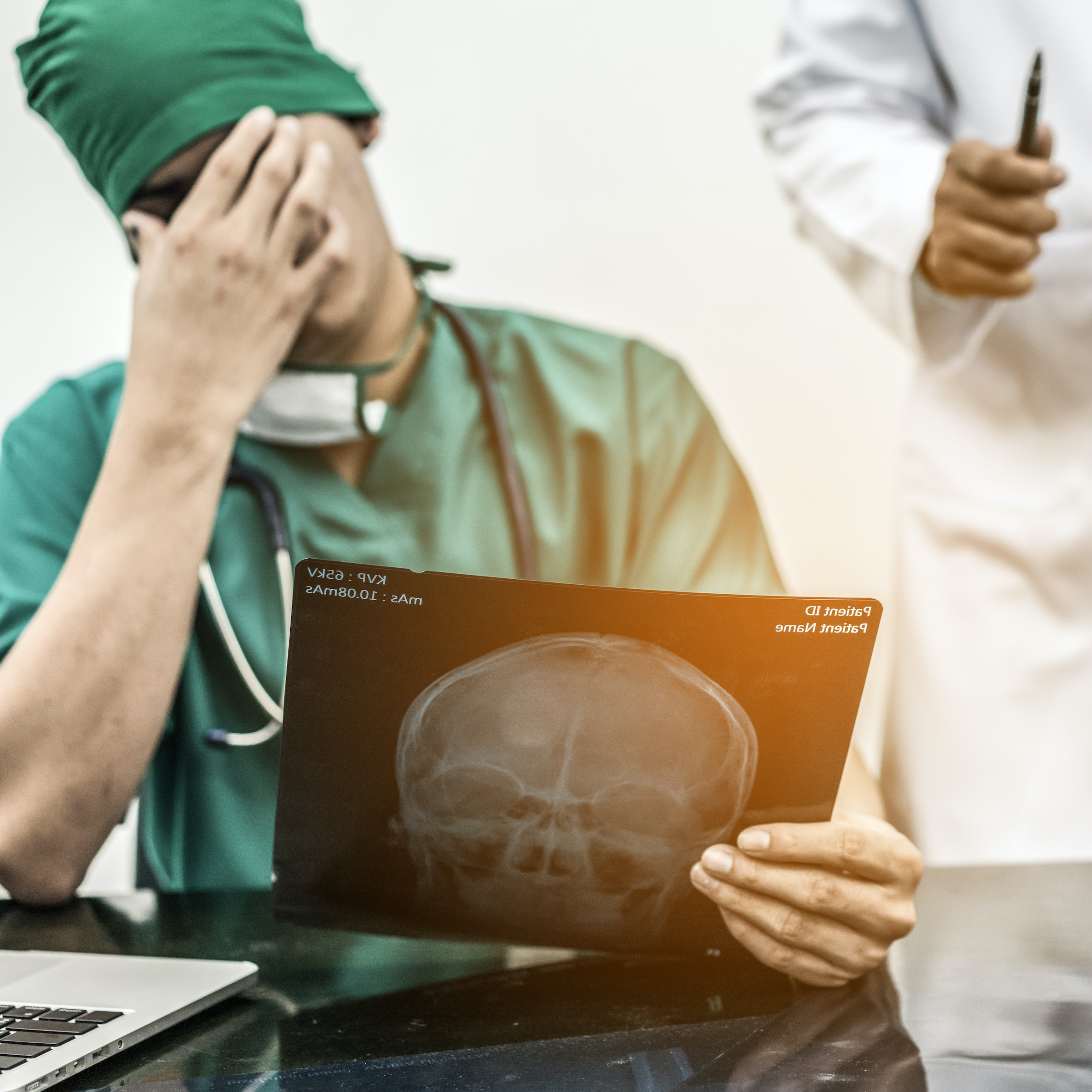 Most Common Causes of Medical Malpractice in Texas: Surgical Error

Justin Hill: Welcome to Hill Law Firm Cases, a podcast discussing real-world cases handled by Justin Hill and the Hill Law Firm. For confidentiality reasons, names and amounts of any settlements have been removed. However, the facts are real, and these are the cases we handle on a day to day basis.

Brian, you and I recently were talking about a case involving a surgeon that during a neuromonitoring of the surgery, there was something missed, and that led to a very serious injury to one of your clients. Let's just walk through, let's start with just generally surgical errors and how that can happen in a case, and how as a lawyer you go about evaluating those claims.

What we're seeing more and more is surgeries in elective surgeries' situations where the person, the patient doesn't get the outcome that they expected. Now, outcome expectations are very different than a surgical mishap or a surgical mistake.

Those are expectation cases, and those are hard cases because of this thing called informed consent. Before any of us have had any meaningful surgeries, we have filled out a form. We don't remember the form, but we filled out a form, and that form, which was created by the Texas Legislature, with the help of the Texas Medical Association, basically sets out the risk for that procedure, which means you thought that these guarantees were made by the surgeon, when in essence and truthfully, you weren't guaranteed anything.

When you're looking at these surgical cases, both from the patient standpoint and from the lawyer standpoint, you are looking at mistakes which are glaring mistakes, whether it's wrong location, whether it's something that another surgeon, thousands of miles away or in a teaching facility or a teaching hospital would say, "I never would have done that". Those surgeries, although you wouldn't think that they'd be prevalent, actually are.

Justin: I got to think one of the hardest parts of an expectation case, because I've gotten calls on these too, is just the subjective part of it. It's funny. I've gotten calls from people that say, "I was told I wouldn't have pain anymore. Pain is just necessarily subjective. I actually do some consulting for a friend of mine who does some plastic surgery. He gets a lot of people saying that," Whatever you worked on doesn't look like you said it would look".

How do you ever prove that the expectations could ever be met, weren't met? It's just such a subjective analysis. I want to walk through, you talked about two things. Wrong body parts, those are still solid, provable cases. There's a special law on sponges or foreign items left in the body, right?

Brian: There are. Believe it or not, sponges and finding those sponges and actually finally removing them, one of the last areas where there's a discovery rule in Texas, the discovery rule used to allow the unfortunate patient certain times within which to find out that they finally had this damn thing that's causing this infection. It's really been, for the most part, disproven or taken out of medical malpractice litigation, except in the case of sponges.

You made a mention of expectations in plastic surgery. There was a period, probably 5 to 10 years ago, where the vast majority of my calls for medical malpractice cases were plastic surgery cases, and they were breast implant cases. They were not necessarily failed, although the patients believed that they were failed, and sometimes the husbands believed that they were failed. The expectation was, "I'm going to look a certain way because I took this picture from a magazine and that's what you're going to recreate," and certain doctors took advantage of it.

Those were not good cases because you're trying to translate a very subjective belief, "I'm going to look a certain way. I'm going to feel a certain way," with the understanding that you're going to go in front of a jury of 12 people, probably half of those people are men, and you're going to talk about something that's fairly intimate and specific to you, how a certain body part or body parts look, and that is hard to translate.

Justin: I've had this specific issue in a non med mal setting, there is some amount of discomfort and luxury that you have to overcome when it comes to certain plastic surgeries. Maybe they've been affected in a car wreck and you're trying to get recovery for those. It's hard to convince a jury that I need recovery for this thing I spent $20,000 on or $15,000. It's just that it's a hurdle to overcome because it's such a luxury that so many people cannot afford. I think that probably translates in the med mal context as well.

Brian: As you try cases more and more, you realize that the jury hears, "Do not let bias to simply play a part in your deliberation". That's the third instruction that a judge gives them in their charge. When you get to the point where you're describing a problem with plastic surgery or how this patient may not be happy with what took place, you really need to keep that in mind because, for instance, or for example, a male is not going to have much sympathy for a woman who spent X thousands of dollars on breast implants and is now dissatisfied with them. Those are, and I hate to use the quote, but those are white people problems, as opposed to our general population's problems, and you don't really translate those kinds of problems into money.

Justin: Let's talk about another thing because I think a lot of people, especially who listen to podcasts, their biggest exposure to medical malpractice surgical errors is Dr. Death out of Dallas. You had this very crazy surgeon who had a god complex. He was a narcissist. He did drugs and alcohol, and he would butcher people.

I guess what I really want to point out is there's this really broad range between clear examples of medical malpractice where you have a guy on coke and booze doing surgeries that he's not qualified to do, or the wrong leg or taking a sponge out on one end, somebody who doesn't like the way their nose job looks on the other end, but then in between, you have good surgeons who make bad mistakes occasionally that end up permanently disfiguring, disabling or killing people. Talk to me about maybe one or two of the cases, and in general terms because all these things are confidential, that you've seen, in just terms of run of the mill surgical error that is not this terribly egregious situation.

Brian: Sure. One of the things that you'll see is more and more they're elective procedures. When I use the term elective, I mean it's not a life and death situation now and surgery needs to take place. A lot of people, especially in this community, suffer from gallbladder issues, which means that a patient goes in for gallbladder surgery and the doctor goes in, use the laparoscopic approach, which means there are three or four different holes and they go in and they try to remove the gallbladder and hopefully this will relieve the symptoms.

Now, sometimes just to be honest and accurate, you can't necessarily see what you're trying to remove. You know generally the geography of the body and the anatomy of the body and you're trying to remove certain things, but that doesn't always work. You have these people who believe that they've had this laparoscopic gallbladder procedure to remove it and four or five, six months later they realize, "Well, it wasn't all removed and I still have these symptoms".

Those are the types of things that they're not prevalent, but there are things that you see and things that you hear about. It's fascinating because when you take the depositions of those surgeons, those surgeons will admit, "I couldn't exactly see what I was operating on. I removed what I thought the problem was and I guess it wasn't a problem".

You would think or I thought when I started taking these cases, when I started looking at gallbladder removal cases, I thought that all of these surgeons are going to say, "I could see exactly what I was removing and there's no way in the world that there was an error".

I think that's fascinating because sometimes we think that these surgeries are these wonderful, pristine, clean, wonderful things that happen where there is no chance for error. With these general surgeons that I've been deposing in these cases are telling me is, "That's not it at all Brian, there are all these organs, there's all these overlying and underlying issues and I'm trying to deal with. At the end of the day, I'm trying to remove this organ that's in the middle of your chest and do it the best I can".

Justin: I think that's a really good example and a good one to end this on. That's going to do it for this episode regarding surgical error. We're going to talk two more with Brian regarding medical malpractice. I just added informed consents to the list because I think we use them. They're used against us. We use them in our cases.