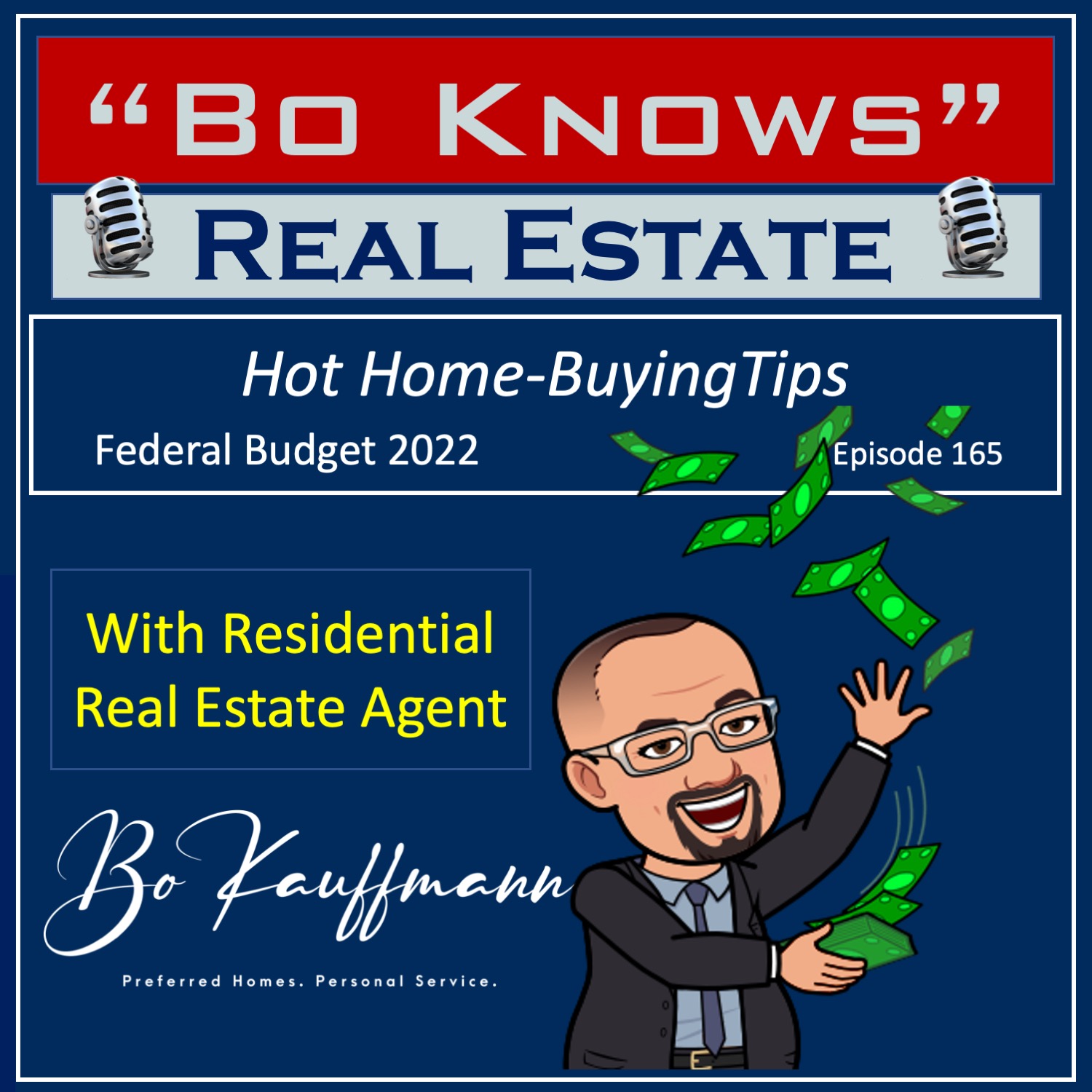 [00:00:26] Hello, everybody I’m Bo Kauffmann Remax performance Realty with another episode of Winnipeg's real estate podcast. You know, the real estate market is super hot, so naturally everybody thinks that that's a good thing for all real estate agents. And it's just a wonderful thing. Well, it's not a great thing because it's, so one-sided the only one who really benefits is anybody who wants to sell their house and not buy another one.

[00:00:48] So if you're retiring and we're gonna move into an apartment, this is a great time for you. But for buyers and especially first time buyers, it's not a great time. Houses are selling for not only 60, 80, a hundred thousand dollars above asking, but they're selling for 80,000, a hundred thousand dollars over what they would have sold last year.

[00:01:07] So if you're a first time buyer you're struggling, it's a, it's a tough time to get into the housing market. So naturally the federal government is going to step in and fix this issue for us with some of their proposals. So I had a friend call me last week and say, Hey, I heard that the blind bidding is coming to an end, the federal government's going to outlaw it.

[00:01:25] And I had to kind of look it up and see what they were talking about. And it's part of their proposed budget is that they are looking for a way. To make this whole process of house purchasing more fair. So let's take a second here and talk to somebody who knows a lot more about this, somebody who is in the financial game, and that is Mike Schroeder of mortgage architects.

Hey Mike, how are you doing it's Bo

Bo Kauffmann - REALTOR: I thought I thought today we'd talk about the proposed budget. Because about a week ago, a relative of mine called me and said, Hey, have you heard that blind bidding and sealed bids are a way of the past are going away? And I'm saying. No, actually, I haven't heard that's so I had to look into it and that's one of the proposals that the government, the federal government would like to do away with, uh, to put it in perspective and to put some history behind it is when you put your house up for sale right now in most provinces, you can put it up for sale and then buyers enter bids that are private and sealed and only the seller gets to open them. Well, what, what can happen is somebody, the winning bidder can overshoot all the other bids by quite a bit great for the seller. Um, but you know, the federal government says, Hey, we don't like this. So they, you know, Talked about maybe finding a way to put an end to it.

[00:03:15] There's a lot of, uh, things that we might be doing, but it's not even voted on yet. So, Mike, what have you heard and what do you take away from this proposed budget? Well, let's start

[00:03:25] Mike Schroeder - Mortgage Architects: with, what's actually been talked about details. So the first one is actually a proposal. I like it's called the tax-free first home savings account.

[00:03:54] You put money in there and it grows tax-free. You could pull it out. Penalty free. Well, what this product does is actually combines both of those things together. You can put your money into this account. It is tax deductible, meaning it lowers your taxable income tax return at the end of the year. Right? But now you can pull money out of the tax free for your first time buying a house.

[00:04:21] Bo Kauffmann - REALTOR: That's right, because, um, I, I think we glossed over it that the TSA, the tax-free savings account, your money grows in their tax-free, but it's after tax dollars that you put in, correct.

[00:04:41] Bo Kauffmann - REALTOR:  So that if that passes, that would be an awesome thing. Is there what's the limitation or what's the limits on that? How much can anybody put in there per year in Israel?

[00:04:50] Mike Schroeder - Mortgage Architects: So the proposed limit right now is $8,000 per person. And there's no limit for household. So husband, wife, maybe adult children in the house, um, siblings down and whatnot can all contribute together.

[00:05:10] Bo Kauffmann - REALTOR: Okay. So husband and wife or boyfriend, girlfriend, they start saving. They get engaged, married. Then they buy a house. They could have up to 40,000, which has been tax deducted throughout the years. So that's, that's, that's an awesome benefit. And then they can put $80,000 towards the house and that's, they, they can take it out without having to pay income tax on them. Exactly.

[00:05:38] Mike Schroeder - Mortgage Architects: Consider it another benefit for friends with benefits.

[00:05:46] Mike Schroeder - Mortgage Architects: So now it's easy to forget is that when you're a first time home buyer you get a tax credit which lowers your taxable income. Um, so the current credit is $5,000. Now that doesn't mean you get $5,000. That means a lower your tax bill by five grand.

[00:06:20] Mike Schroeder - Mortgage Architects: Well, one of the things that I'm interested in and mostly from the side of unintended consequences, is there a talking about some sort of ban on foreign ownership? I guess that leaves the question of defining foreign ownership, right? Is that someone who's new to Canada? Does that mean a refugee, a student and immigrants? We don't know. This is simply a big proposal and so.

[00:06:44] Bo Kauffmann - REALTOR: Well, yeah, exactly. I'm thinking back on somebody, I don't know, six, eight years ago somebody called me or emailed me, hi, I am the, uh, um, finance minister for, and then this is African nation. And of course you get these emails, please send me money, you know? Um, but no, this really was the finance minister.

[00:07:03] He came to Canada and he bought a condo for his daughters to go to school. So would that be considered foreign? He doesn't live here, but his daughters go to school here and they have a place to live. So if, if that's the kind of a thing that they are proposing to stop, that probably wouldn't be a good, it would not be a good thing.

[00:07:20] But, um, yeah, it's, it's the federal government, right? They, they kind of have their fingers in everybody's in everybody's business and sometimes it's not a good idea.

[00:07:29] Mike Schroeder - Mortgage Architects: One of the additions supposedly set up might not apply to students, but then does that apply to the student, gets to get to know payments. So I don't want to speculate you on some things that we don't know about. It's just not worth our time to do so.

[00:07:37] Bo Kauffmann - REALTOR: What about interest rates? Hey, I just heard that they talking about another hike in June.

[00:07:45] Mike Schroeder - Mortgage Architects: So that's the speculation right now. I can tell you on the fixed rates that ever since the government announced, I want to say it was yesterday, uh, where the inflation rate is that right now, um, that caused the bond market to spike, which raised the by fixed rates.

[00:07:59] And so we're now seeing five-year fixed rates of at least 4% while some lenders don't need a little bit higher. Okay. Uh, variable rates are still considerably lower than the fixed, but you're right. The federal government has said they may increase the overnight rate in June. So that's definitely watch for, uh, for a lot of reasons.

[00:08:17] I still think variable is a better choice than fixed, but at the end of the day, that's a personalized conversation that we need to have with people want to know the mortgage nature. Then you understand the risks and benefits of that.

[00:08:27] Bo Kauffmann - REALTOR: Gauging their comfort level and, and their, you know, what, what they know their future to be.

[00:09:10] Mike Schroeder - Mortgage Architects: Well, don't forget as well that the higher the interest rates, the more you're paying the lesser paying towards principle, right? So one of the benefits of home ownership is principle reduction.

[00:09:19] Every time you make that payment, you are lowering the amount of money, all the house, and therefore you are increasing your equity. If you have a lower interest rate, you're building equity that much now.

[00:09:39] Mike Schroeder - Mortgage Architects: Correct. And so there's a number of programs and principles in place to help people who are recent immigrants to Canada, uh, getting the homeownership will be easier. And so these are the things that those, if we don't know about. And so that's something we thought would cover in the future.