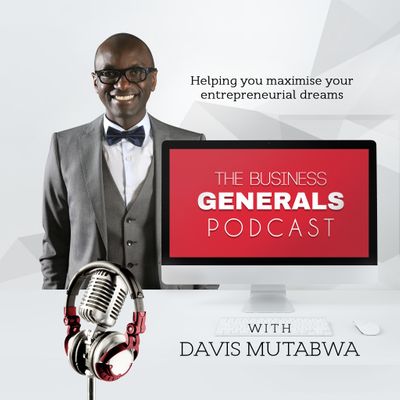 The Business Generals Podcast | Helping You Maximize Your Entrepreneurial Dreams - Every Single Week - Davis Mutabwa
085 – The innovative treadmill desk: Getting your innovation from idea stage into a profitable business and scaling up (w/ Rob Jacobs)
00:00:00 00:57:28
1x SPEED

085 – The innovative treadmill desk: Getting your innovation from idea stage into a profitable business and scaling up (w/ Rob Jacobs)

Rob Jacobs is the guy who gets people up-and-out of their chairs and moving again! A personal fitness expert and the co-founder of UnSit, an innovative company working to get people UP out of their chairs and moving again with the world’s first Treadmill Desk optimized for use in an office environment. His background is firmly in the fitness industry having been in treadmill retail and commercial equipment including a repairs and servicing business model. Being a fitness enthusiast sitting at a chair all day made Rob research into how to help people with desk jobs get fitter by moving more.

First business startup – the walking centre.
This was a fitness centre targeted at middle aged stay at home mums who would go into the store, rent a movie, and walk on a treadmill while watching their movie! This proved to be a great model for Rob. The results were very good and people started buying these high ticket treadmills in the Beverly Hills area, and opened more stores which also included the sale of commercial fitness equipment. Rob eventually sold out of the retail model after a number of years as the market changed with increased competition and margin pressure.

Before selling out of retail Rob had developed a service model that repaired and serviced fitness equipment for health clubs and fitness centres, so with a new business partner Rob developed and grew this business to include retailing of spare parts. Rob has maintained and continued to grow this business over the last 25 years plus and it still continues to be his core revenue generator.

The business model is ecommerce based enhanced with telephone technology support, targeted at out of warranty fitness equipment servicing clients in different countries.

The problem that turned into a new business idea
Rob found himself constantly sitting at a desk, servicing clients and growing his spare parts business, and found himself having less and less exercise, feeling lethargic, lower back problems all from sitting behind a desk far too long.

A book by Dr. James Levine, who is credited as the popular inspiration for the treadmill desk, inspired Rob to work on solving his problem. Book reference: Get up – why your chair is killing you, Dr James Levine

Rob had seen the idea before but he discredited it on the basis that he didn’t think a treadmill desk provided real exercise or real practicality in an office setting. [During this interview Rob was walking along at 1 mile per hour on his treadmill desk and by about 15 minutes into the interview he had clocked over 2,000 steps! Pretty impressive].

Dissecting the research and looking at the market opportunity

Beta testing of the product

Other topics we discussed with Rob

Look forward to serving you again here on the blog and over on our podcast!