Bruce Schultz is a living legend in the world of professional handlers. Still actively showing dogs, Schultz said the secret to his longevity is being happy for the winner.

“You’ve gotta be happy for the other person,” Schultz said. “I think that’s why I’ve lasted so long. I know there’s good dogs out there besides my dogs. I’m happy for the people who win, like they should be happy for me.”

Dreams of a Young Man 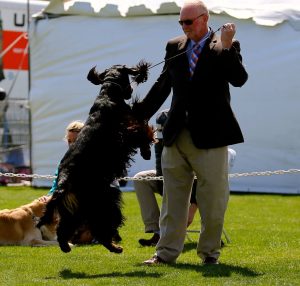 As a kid, Schultz loved hunting. His first really good hunting dog was a German Shorthaired Pointer he bought for $50 from the breeder after it was returned by the original owner. “He was so dedicated and so smart. I shot many a pheasant over that dog.”

But his dream was to own an Irish Setter. He bought his first from a breeder in Phoenix. “We found a litter in the newspaper,” Schultz said. In those days, advertising dogs in the local newspaper was standard practice. The breeder was an obedience competitor, so Schultz worked his new puppy in obedience, earning a CD on him at nine months old.

As he traveled to shows in Arizona and Southern California for obedience competition, Schultz watched the conformation classes also.

“My first impression of conformation was ‘These guys don’t have to do anything but run around the ring, pose their dogs and somebody points at them,’” Schultz said. “‘Obedience we have to work at it. We have a judge that scores you and if you make a mistake you’re outta there!’”

He eventually bought a couple Irish Setter bitches and began showing them in conformation. Over time, people started asking him to show their dogs. This was at the time handlers had to be licensed by the American Kennel Club in order to charge a handling fee. “I got really hooked on it, started showing more dogs and here I am.” 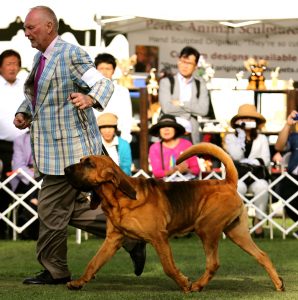 Schultz became a licensed professional handler in the late ‘70s, right before AKC ended the practice.

“I’ve been very, very lucky with the dogs I’ve shown,” Schultz said. Amongst his records is piloting the top winning GSP in the history of breed. Brittania, BIS/BISS/NSC Can Ch DC NMK’s Brittania V. Sibelstein HOF won 50 BIS and 150 Group 1 awards in two years in the 1980s. His next top special, the English setter bitch, Ch Goodtime’s Silk Teddy, had the same record and won three national specialties, also in just over two years.

“It depends on the dog. There are dogs that love it. Every dog is totally different,” Schultz said. “You not only have to think of the owners, you wanting to do it, the dog wanting to do it. Those two dogs could have gone further but I figured ‘hey, I did enough with ‘em in the time period.’”

Running for number one, Schultz said, is time consuming and mentally and physically draining. Keeping the dog mentally capable of doing it is the biggest challenge.

But the importance of maintaining friendships and friendly competition, even at the highest stakes level, is one of Schultz’ critical observations. He reminisces about his Border Collie going second in the group at Westminster Kennel Club behind his friend Jimmy Moses’ German Shepherd Dogs for years.

“Never beat him at the Garden,” Schultz laughed. “I beat him one time in the group. I still remember the show! It was Snake River, Idaho. But we’ve remained friends over the years. Business is business.”

Chris Terrell, breeder, owner, handler of the WKC BIS winning Afghan Hound Pepsi, Ch. Kabik’s The Challenger (https://www.nytimes.com/1983/02/16/sports/afghan-westminster-best-in-show.html), was another of Schultz’ friends. Terrell, an amateur owner handler, and Schultz frequently socialized after competing head to head in the best in show ring.

“Pepsi is one of my favorite dogs of all time,” Schultz said. “Chris and I traveled together. Whoever won, won.”

Schultz noted that he has concerns with a lot of the newer handlers because they “expect to win every show, no matter what they bring in the ring. They think everything has to be fixed for them. Why don’t you just show the dogs. We used to have fish fries, steak fries, people mingled.”

Learn From the Past

Looking to the past, Schultz observed, is imperative to learning for newer exhibitors.

“They have got to look into the past. Who did what, what were the great dogs,” Schultz noted. “They don’t study pedigrees, they just go out and breed. They don’t have clue of who the grandparents are. Grandparents are a huge influence on the get.

“…Good breeders of the past studied pedigrees. They knew the backgrounds of the dogs. They studied their breeds. The good dogs in different breeds, those breeders are still on top of their pedigrees.”

Listen to the podcast to hear Schultz’ Tips for Winning When the Chips are Down and his fascinating Dream Best in Show Lineup! This list of dogs from the ‘50s through present day is delicious. Sneak peak, can you name this dog?

Learn about one of Schultz’ long-time clients, Susan Hamil, and her Bloodhounds in PureDogTalk episode 64: https://puredogtalk.com/64-bloodhound-mantrailing-and-canine-health-foundation-tick-program-with-susan-hamil-2/