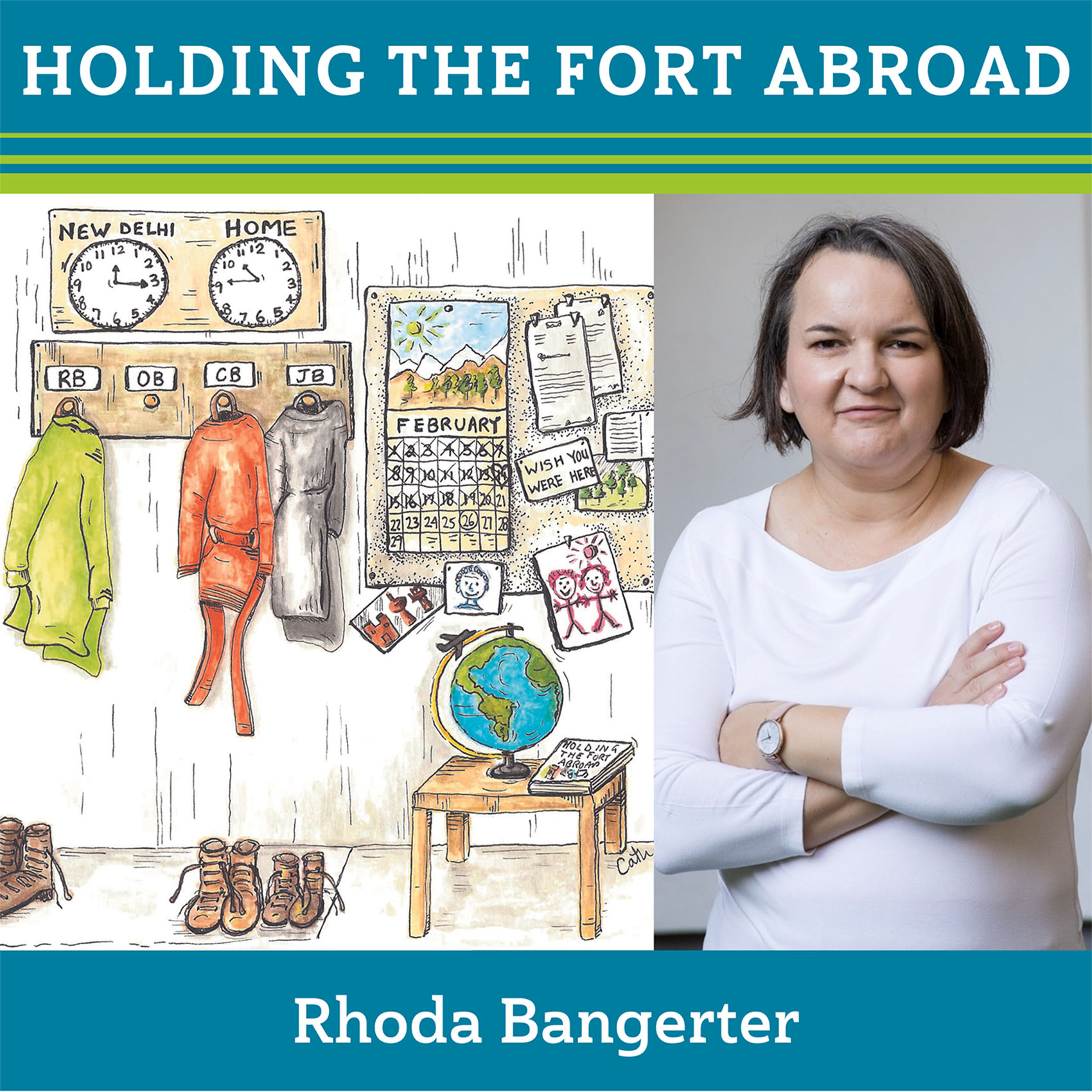 In this episode, I share a little about my burnout in January 2021, the panic attacks I experienced and the exhaustion that set in after a series of difficult situations accumulated. I share how I recovered and the lessons learned from that incredibly difficult time. If you feel that you have been stressed for a long time, this might be worth a listen. If you are experiencing panic attacks, stop listening if it is triggering for you. In these shownotes are the techniques and tools that helped me. I am so grateful that during that time I had access to emotional and practical help from professionals and from family and friends.

Resources Mentioned in the Episode

Welcome to Holding the For Abroad, the podcast for expats with traveling partners. My name is Rhoda Bangerter. I'm a certified coach and the author of the book Holding the Thought Abroad. In this podcast, I interview men and women who live abroad and have traveling partners so that we can all benefit from their wisdom and experience. I also invite relationship experts to apply their expertise to this topic.

I always thought burnouts happened to people who, you know, were high flying, professional bankers, lawyers. I never thought it would happen to me, but actually with the life that we lead with traveling partners, partners who are away, living in countries that are not the ones that we grew up in, that can be an accumulation. Obviously, I'm not a doctor. I'm not a therapist. This is just sharing from my own experience in the hopes that it will encourage you if this is something that you're going through at the moment, or if you're feeling stressed, you feel like you've been feeling stressed for a very long time, and you feel like you are drowning, that you don't know where to turn to get help, that you don't know how long you can keep up this lifestyle. Um, I thought I was doing pretty well in 2021, and throughout, let's say throughout the year 2020, there was a lot going on.

My husband was in Kabul at the time I was with the boys in Switzerland. We had an eight year old and a 12 year old. There was lockdown, so we were home and there was a lot of worries going on about whether they would get it and what was going to happen. We were home a lot. I was also writing my book at the time, the Holding the Fort Abroad. I wanted to write it while my husband was in Kabul because I wanted it to be raw, you know, hot off the press, something that I was living.

But it did mean that I was working late into the evenings. But I thought I was doing pretty well. I was drip feeding self-care. You know, sometimes it's harder to get big chunks of self-care, but I was doing well. I was taking time for myself. I was doing things I enjoyed. But what I learned later was I was still flying too close or living too close to my limits. In the middle of 2020, we discovered that, well, my mother-in-law was diagnosed with cancer, and by then I was going down to Lausanne, which was about an hour and a half from where we lived, uh, to take care of her and my father-in-law and take her to treatments and try and figure out what the best thing to do was and how to best help them.

By that time, I'd had my first panic attack, which had happened in March. It was the day that I drove my husband to the airport, and it was the last day that the airports were open and he was going to fly back to Kabul. And on the way, I basically, I had a panic attack. Over the course of the next, you know, six to eight months, I started feeling dizzyness. I started feeling anxiety. I would be able to talk to people. There was a call center that I found out about where you can, like the Samaritans, there are a lot in the different countries, and I can put a link in the show notes for phone numbers that you can call. So I was calling them, talking things through with someone. I had a therapist I was talking to, but she was online.

Vivian Chiona from Expat Nest stepped in to write my foreword. And I remember saying to Jo: I've written a book on how to cope and I'm here and I'm exhausted.” And she said: “Well, that will be your second book. It's okay. This book still needs to come out.” So when I came out of hospital, they said: “You need some help, some practical help.” And that's when, I met regularly with a psychiatric nurse to help me manage my panic attacks. I also went to a hormone specialist. And this is what I'd like to share now about what I've learned since then.

1. The first lesson is to regularly bring your stress levels way down. Although I was flying under my limit or living under my limit, I was still too close and accumulation of sudden, multiple crises put me over what I could manage.

2. The second thing I learned is get all your hormone levels checked out, even if you're a man. Hormone levels and checkups are not only for women. The lady I went to speak to about this and who followed me then for the next six months, she said she sees many men with their hormones unbalanced chronic stress forces your body to produce cortisol continuously. After a while, your body is exhausted and can't keep up production, and then it starts tapping into other hormones. Your hormones get out of balance, and then it's a vicious cycle. And so if you are getting your hormone levels checked, make sure you also get your cortisol levels checked.

So number one was regularly bring your stress level way down. Number two is get all your hormone levels checked out. Number three is check out all, check up all your vitamin and minerals levels.

4. And number four, I discovered something called self havening. I'll put the link in the show notes and there's a YouTube video that you can watch and the person will just walk you through a way of, basically you just put your hands on your shoulders and forearms and you stroke them. You're just basically, you're hugging yourself and you are bringing your body into a state of more relaxation. It's absolutely incredible. I

You contract, hold, relax, and you work your way up your body from your toes all the way to your face, and you are scrunching up your face and then you relax it and that mimics the fight and flight response and then relaxes your body. So your body gets into a state of relaxation. And at the beginning when I was really, really exhausted, it worked. Even it was just very short spurts of it. It relaxed my body and brought my body back when I was feeling too.

5. Take also a look at resources from Dr. Carolyn Leaf. She's a neuroscientist who speaks about the mind-brain-body connection and she has techniques to re-train your thinking patterns. And I used her app, which works, which walks you through a neuro cycle. So when you're thinking of a negative thought, when you're thinking of something, you can start digging deeper into why that thought came up and then reprogramming your brain to reframe that thought. All of her resources are on online and they're absolutely amazing. They helped me enormously.

6. The last thing I learned was that no matter what you do, your panic attack will pass. And that's something that I found incredibly difficult at the beginning, but when I was having a panic attack, it was my, for my case, okay, I'm not speaking as a doctor, but for my case, it was my body and my brain just saying enough, enough. And after a while, as I, you know, took my spiky ball, had my tea, also what the psychiatric nurse told me to do was to time it. At the beginning, it lasted eight minutes. Gradually I was able to bring that time down to eventually recognizing the symptoms early and resting my body and doing my rituals early would help me to actually not get to the panic attack. Rubbing my feet also would ground me.

I'm better now and I'm so grateful that not only did I have access to emotional support, professional and from family and friends, but also that I found out what I have just shared with you. Of course, I'm not a doctor or a therapist, so I can't speak to what you're specifically living. But if you're living abroad, if your partner works away from home and you’re parenting a lot alone, I wouldn't be surprised if you felt stressed. Your challenges are real. Don't face them alone. Sign up to my newsletter to have news of resources and reach out to me if you want to talk.

Thank you so much for listening.