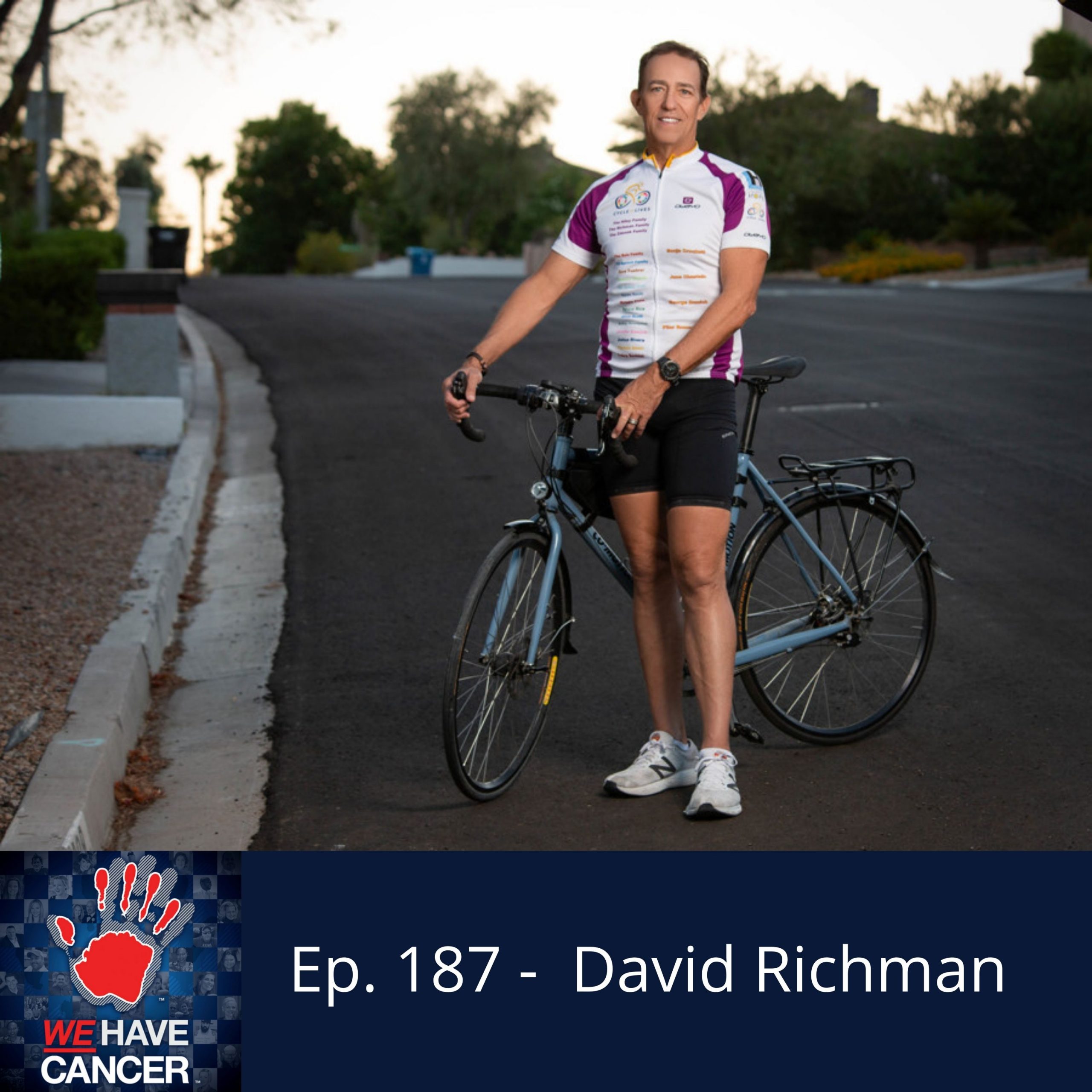 On this episode of WE Have Cancer, motivational speaker and endurance athlete David Richman shares with Lee how cancer first touched his life through his late sister, June. To honor her legacy, David has completed countless races in search of connection, emotion, and perspective.

David Richman is an, author, entrepreneur, speaker, consultant and philanthropist. But before any of that, he was a brother to June. In 2007 June was battling her final stages of brain cancer, and David was ready to run beside her during Relay for Life. June passed away just days before the race, but David still went and ran. His experience at that race sparked a new passion in him for endurance sports for a cause. In the last decade, he has completed over 50 triathlons, over 50 runs longer than marathon length, and most recently, he biked 4,700 miles cycling across the country to interview participants for his new book exploring the emotional side of cancer, Cycle of Lives.

David's sister June received news that she had serious brain cancer in her forties, and that it was most likely terminal. Her diagnosis changed everything. She was the impetus to David's project and nonprofit work, and remains his constant inspiration.

June said the thing that sucked the most about her cancer was that she wouldn’t get to see her kids grow up. Through David's work, June is not forgotten, and her kids get to see her legacy continue to inspire connection.

Inspired by June’s Relay for Life team in 2007 (called the June Buggies), David promised her he would run right alongside her. But June passed away just a few days before the race. Over time, David wanted to meet and interview all these people touched by cancer and bring them together. So he hopped on a bike and went city to city in a matter of six weeks.

Lee asks, was the biggest surprise while working on Cycle of Lives? David says he went into the project thinking it would be dark and heavy all the time, but he was surprised and inspired to find how hopeful and wise so many people were along the way.

How did David learn to dig deep and lean into these meaningful (and often challenging) conversations? He says he loves “trying to figure the puzzle out” when interviewing people, and finds true joy in doing so.

In his book Cycle of Lives, he talks a bit about how up until his thirties he felt like he was never the main character of his own story. He wanted to get out of the shadows and capture stories that would spread light, emotion, and inspiration, just like June.

Dave says, “I think we’re all connected by stories, and we’re connected by emotion.” To him it felt natural and obvious to jump on his bike and ride from city to city to string everything together.

David learned, over the course of the physically and emotionally challenging journey, that he was never running away from anything. He was always running toward the next great story, and that brought him peace, joy, and connection along the way.

Dave shares how much he’s learned about perspective and authenticity. He learned that it’s okay for people to care for him, and to care about him. And he learned that he can’t be afraid to say something and make a new connection.

Too often, we can let our own discomfort be the barrier between making meaningful connections. David says, who has time for that? He’d rather push through the discomfort and form that bridge of human emotion, gratitude, and connection together.

Get David's Book - Cycle of Lives

Support the Child of the Month; Kaden - https://wehavecancershow.com/kaden