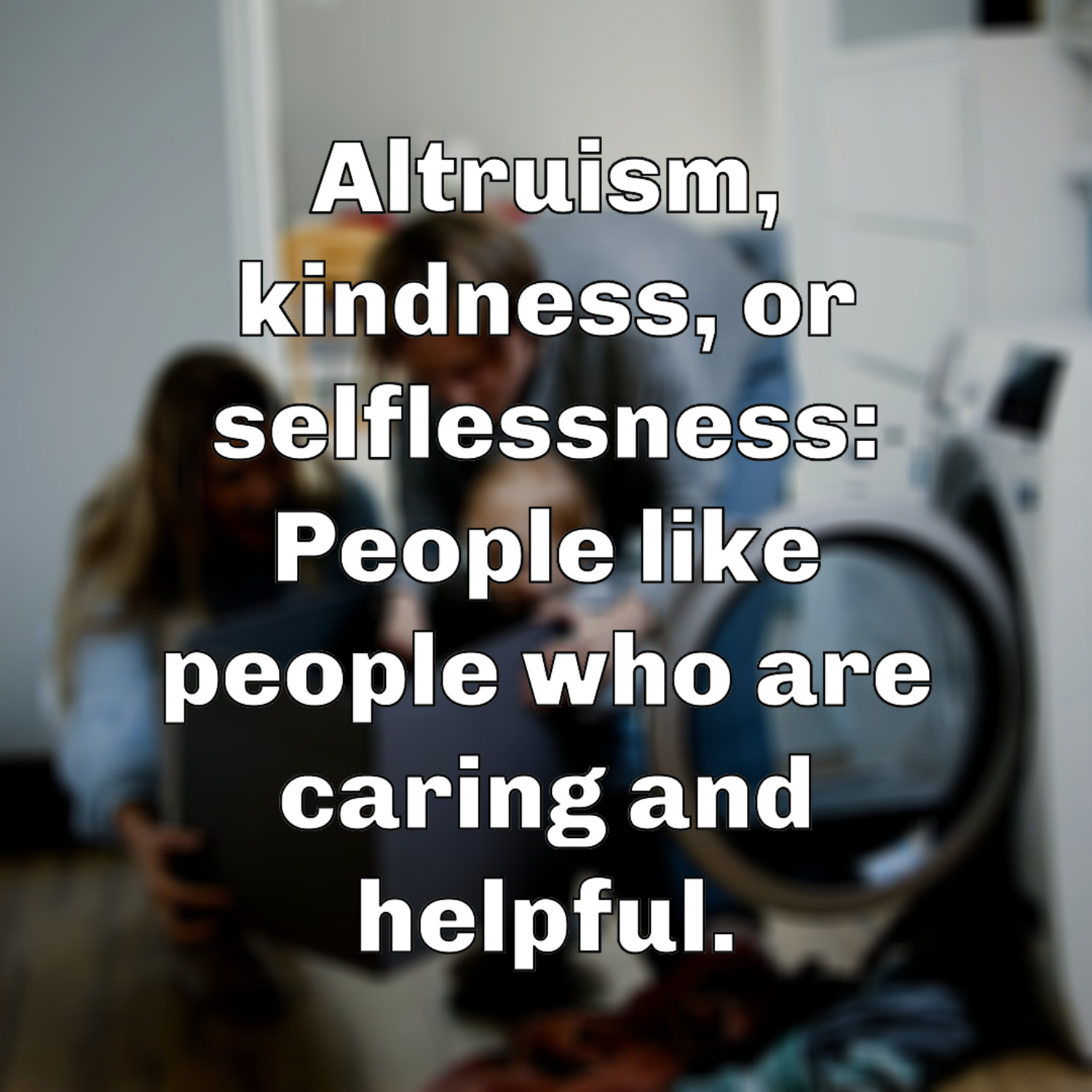 Despite our own internal confusions, there are certain scientifically proven traits we do seek in mates that are more related to biological imperatives. We are subconsciously drawn to excitement and arousal, fulfilling gender-specific arousal triggers, a sense of humor, and masculine and feminine voices.

Research shows that while smiling and expressing happiness can make people like and trust you, when it comes to relationships and dating, this is not always the case: men find smiling, happy women most sexually attractive, but women tend to rate as more attractive those men who express pride (i.e., competence and self-assuredness) and shame (lowered gaze and awareness of social norms). At least initially, expressing happiness is theorized to convey a lack of status or dominance.

There is one final trait that is so universally attractive that I wanted to spend a bit more time on it. Whether you call it altruism, kindness, or selflessness, people like people who are caring and helpful to others. In fact, evolutionary psychologists believe that this human behavior is not just great for the maintenance of a healthy and cooperative society, but it also has direct benefits for the individual being kind.

These findings shouldn’t surprise us much: nobody truly wants to interact with someone who is selfish, mean, or inconsiderate. There are social but also biological reasons that human beings have evolved to care for one another, and to signal their value to others by being considerate, helpful, and conscientious.

Even if you’ve never given it much thought, chances are you want someone in your life who is kind and thoughtful. Do people sometimes choose to be with those who are mean and unkind? Yes. But they tend to love people like this in spite of their meanness, not because of it. While those who have low self-esteem may settle for poor treatment, it’s a pretty standard human trait to want to be around those who are respectful, kind, attentive, and know how to listen—male or female.

When you are selfless, you are communicating a few very attractive qualities to potential mates. You are telling them that you are secure enough in your own identity and feeling of self-worth that you don’t need to constantly focus on yourself in any interaction. This signals a relaxed, confident person.

When you are selfless, you broadcast that generosity of spirit that makes you seem positive and well balanced. People are attracted to those who are not always trying to stroke their own ego or get something out of others, but instead are so comfortable and content in themselves that they have extra to give to others. This is a really empowered position to take!

Finally, if you’re selfless, you come across as more easy-going, more open, and more intelligent. You may even seem like a better lover—who doesn’t want to be with someone selfless in bed?

Of course, selfless doesn’t mean you’re a long-suffering martyr or that you use kindness in a passive aggressive way. You have to be genuinely kind, i.e., not pretend to be nice because you’re expecting a reward for it. It’s less attractive if someone is being helpful or kind simply out of begrudging sense of duty and obligation. Rather, people are attracted to those who have a strong moral compass, and sincerely enjoy doing the good in the world and acting toward the things they care about. You may not hear it often, but people with values and principles demonstrate to others that they have self-respect and a mission/purpose in life—and that’s very sexy.

This is useful information both as we try to attract the people we desire and when we try to make ourselves more attractive to them. Forget the idea that nice guys finish last. Genuine kindness, concern for others, and thoughtfulness are always appealing in a mate, male or female. Look for people who are authentically caring and cooperative and commit to being that kind of person yourself.

A little playing hard to get, a little uncertainty, a little frisson and tension—none of that means you forget your manners or treat others with anything other than respect and thoughtfulness.

The media likes to perpetuate the story that girls like bad boys, and that men go weak in the knees for bitchy girls. But it’s just not true. While meanness, cruelty, or disinterest may capture some people’s attention initially, it’s the kind of attraction that won’t be sustained long term. Creating a successful long-term sexual relationship requires both parties to be kind, sweet, and caring to one another.

Sounds kind of obvious, doesn’t it?

Happiness is Sexy—If You’re a Woman

Quick, which kind of man do women like most, the happy smiling dude or the dark brooding guy who’s always scowling a little?

The display and expression of emotion and how it affects attractiveness has not been extensively studied, but the common belief that a smile is attractive may not be entirely true. A smile may indeed make people think you are friendly, trustworthy, and kind, but it may not make you seem more sexually attractive—at least to women.

The researchers asked one thousand adults to rate the attractiveness of pictures of people who were demonstrating happiness (smiling), pride (chin up, standing tall), and shame (lowered gaze). The women liked best the men who demonstrated pride and, surprisingly, shame, but were less impressed with those who were simply happy. Men instead rated the smiling happy women as most attractive, finding proud women least attractive.

So, if you’re a guy trying to make a good first impression, should you pout and mope? The study’s co-author Alec Beall says, "It is important to remember that this study explored first-impressions of sexual attraction to images of the opposite sex. We were not asking participants if they thought these targets would make a good boyfriend or wife—we wanted their gut reactions on carnal, sexual attraction." So, while being dark and mysterious may be great for initially catching attention and sparking attraction, most studies find that in the long run, people overwhelmingly prefer nice personalities and those who express positive emotions.

If we look more closely at the postures and expressions rated as most attractive for men, they make sense: women may prefer men who appear self-assured, competent, and confident. This implies a certain degree of power and competence, which are broadly considered attractive for men in most cultures. Smiling, however, is sometimes suggested by evolutionary psychologists to signal a lack of dominance.

Again, there is nothing especially “feminine” about the emotion of happiness or its expression; rather, these studies seem to show that at least in the earliest moments of raw physical sexual attraction, we are still guided by our most primitive and basic impulses.

So many of our (frankly sexist and outdated) rules for dating and relationship norms rest on gender assumptions that studies like this appear to confirm. However, what about the fact that men who displayed shame (such as looking down or acting bashful) were also rated as very attractive? Both men and women found this emotion attractive, perhaps because it conveyed an attractive awareness of social norms, which may in turn communicate intelligence and cooperativeness.

How can we apply this to our dating lives right now? That’s simple: if you’re a woman, a smile really is your most attractive asset. Openly express happiness, joy, delight, and contentment, and you will automatically seem more appealing than a woman who is displeased in some way. If you’re a man, realize that the main thing you want to convey in the very earliest first impression is that you are competent, powerful, and in charge of yourself. You don’t need to come across as unhappy. Rather, you want to give the impression of being in command of yourself, confident, in control, and competent. A little serious.

Depending on your personality, you might like to come across as a serious and intense intellectual, or you might decide your style is more rebellious, moody, and dark. Whatever fits for you, though, remember the other finding of the study: that the expression of “shame” was also deemed very attractive. So don’t be cocky or boastful; instead, try to come across as quietly confident in what you know you’re awesome at, yet willing to be humble and deferential with those things you aren’t.

Beyond first impressions, it’s probably best to switch your tactic—for longer-term dating and relationships, emotional intelligence, and honest expression are more attractive for both sexes. Dark and mysterious may work like a charm late at night in a club, but once you’ve dated someone for a few weeks or months, it’s attractive for both sexes to be emotionally forthcoming. Initial attraction is often based on our more primal, instinctual, and biological drives, whereas mature and healthy long-term relationships develop after that, steered by our rational conscious mind. So, though a woman might find a “bad boy” kind of hot on a superficial, purely physical level, she probably wants a little more emotional maturity by the second date!