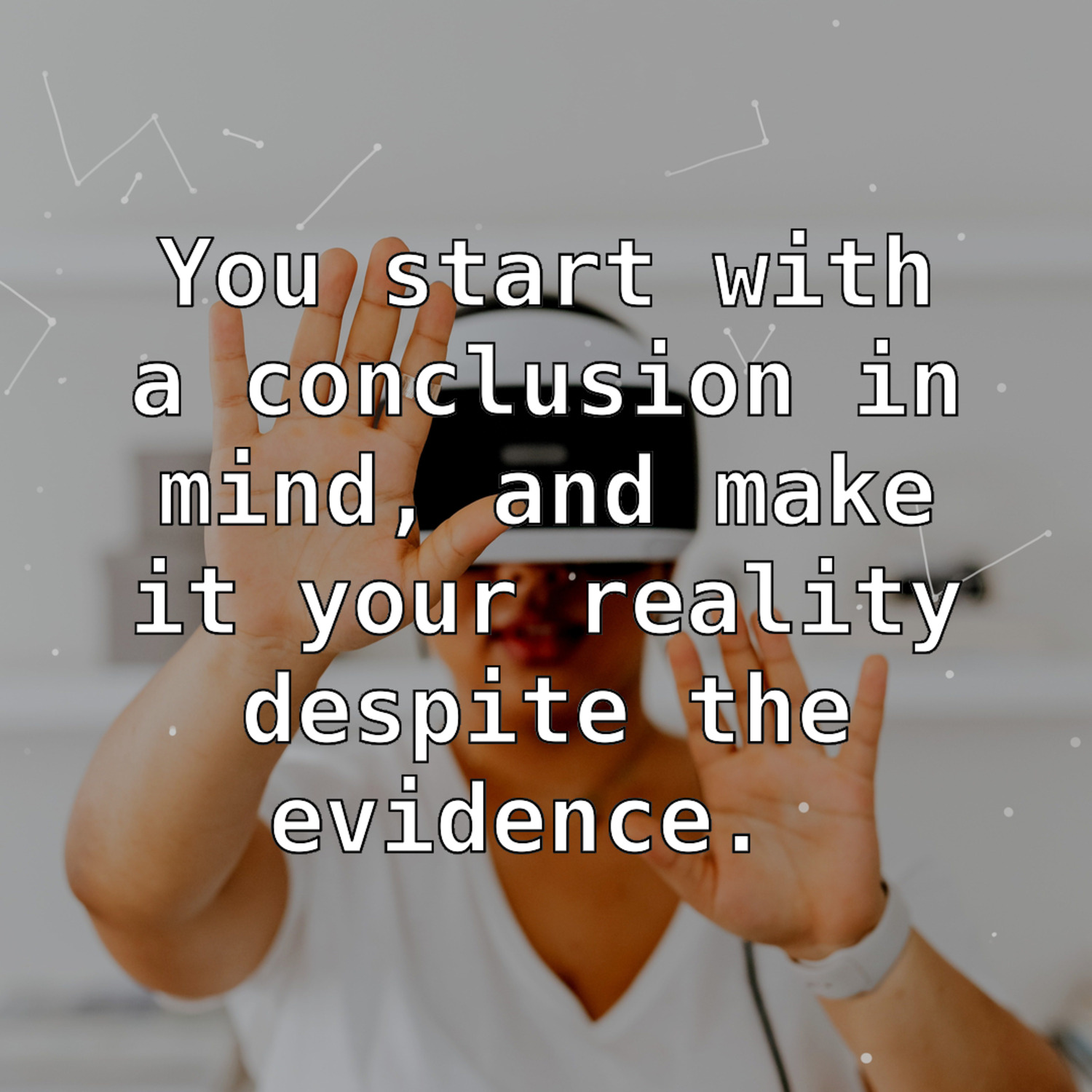 The most glaring example of this is confirmation bias, wherein we are deaf and blind to evidence that doesn’t support what we think. In other words, we see what we want to see, and we can make a belief appear out of thin air. This is dangerous because it brings the ability to ignore reality. You eventually become entrenched in an echo chamber of reinforcing information that will lead you astray.

We have mentioned confirmation bias briefly throughout this book, but it’s time to dive into it because it’s really the first place we must visit on our way to open-mindedness. It’s an important tendency that we must avoid and something that we engage in frequently without any awareness.

Confirmation bias is rampant when one only pursues and listens to information or evidence in favor of a certain belief that we wish to be true. Doing so causes one to disregard, rationalize, deny, or steer clear completely of evidence that disproves or challenges that belief. It’s not necessarily driven by ego so much as it is a desire to be correct.

You think, “women are bad drivers.” You see a bad driver on the road one day, and turn your head to see who it is. A woman! See? I knew it. Your belief is confirmed. The next day you see another bad driver, turn to look, and it’s a man. You conveniently forget this ever happened. At the end of the week, you genuinely believe that you have gathered sufficient “evidence” to prove that women are bad drivers. After all, didn’t every bad driver turn out to be a woman? You certainly remember it that way. You believe you are gathering evidence; in reality, you merely act to confirm a preconceived belief.

Confirmation bias is the ultimate stance of seeing what you want and using that perception to prove a pre-chosen conclusion. It’s where you start with a conclusion in mind, and work backward to make it your reality despite evidence directly to the contrary.

The simplest example is when you have a particular stance you want to support—for example, that dogs are loyal. So, you type into Google “dogs are very loyal”—obviously this is going to generate results about the loyalty of dogs, whereas if you type in (1) “are dogs loyal?”, (2) “dogs’ loyalty,” or (3) “dogs are not loyal”, you would get a broader range of the literature on dogs and loyalty. This particular stance does not have any consequences, but confirmation bias can also turn life-threatening.

For instance, you may support the conclusion that you are a world-class skier despite having only skied once in your life. Despite evidence that you constantly fell even on that one occasion, you explain it all away as “beginner’s bad luck” and insist that you are ready for a double black diamond course—a type of course that involves cliffs that one could easily slip off of into oblivion.

You see other people’s warnings as jealous, and you even find anecdotes from famous skiers about how they were amazing after only one class, ignoring the warnings of everyone else. You find a group of first-time skiers who advanced quickly for inspiration. All your detractors “don’t know who you truly are,” and “underestimate your abilities.” Unfortunately, you end up persisting in the belief of your abilities, and you ski right off a cliff and perish.

That’s how confirmation bias can tilt your interpretation of the world by restricting the flow of information. If you want to believe an opinion, then you’ll feverishly seek out sources that will buttress your belief—even if it’s false. And you’ll ignore (No, I didn’t see that!), deny (No, I refuse to believe that!), or rationalize (No, it’s different here! I’m different!) sources that counteract or disprove your feelings—even if they’re true.

It tends to lock us up in an echo chamber, where we only listen to a small number of the same voices and a narrow range of opinions, all of them in support of our view. For all intents and purposes, this is your world and reality; this is the majority view that seems to be the truth. With so many people (people around you, anyway) saying the same thing, how could you go wrong?

Though death by skiing is a fascinating phenomenon, an everyday example can help illustrate this better as to how we do it in our lives.

She’s gone on two dates with John. After she returned home from the second date, she sent John a picture of a wedding ring that she liked and asked for John’s mother’s phone number. John is rightfully horrified. But Sally felt that she was simply acting assertively because she had asked five of her closest friends, and they all told her to do this. She also searched online and found one source (meant as satire) that told her to do this, while ignoring all the other search results that told her not to be so clingy so quickly. An echo chamber was created around Sally, leading to a detachment from reality and the situation at hand. Good thing John and Sally met at the date venues, and Sally didn’t have his address!

It’s never easy (nor much fun) to be diagnosed with confirmation bias. But once you realize where it’s stemming from, it should motivate you to seek a course of action to lessen its impact: argue against yourself.

If you’re certain of your opinion, then you should be able to identify the arguments against your opinion. After all, you know exactly what you are ignoring, denying, or rationalizing. The typical sequence of events is your opinion, an opposing argument, and your confirmatory reaction. What then? Continue that discussion. Make an honest effort to create a back and forth to see the merits and weaknesses of both sides.

If you give 100% effort to your own opinion, you must give 100% effort to the opposing opinion. Engage with it and ask why it exists. Ask about the different perspective that created that opinion. Question the evidence you like as harshly as you’d question the evidence you dislike. Hearing the other side of an argument will give you a much better ability to understand a different position, the different worldview or reality, and the factors involved that you never considered. Even if you don’t change your opinion, you’ve opened up a channel that wasn’t there before.

For example, maybe you’re talking to someone who is bitterly opposed to the construction of a new park in your neighborhood that you support. You think a park would substantially increase the livability and comfort of your neighborhood, but your opponent doesn’t think it’s a good use of money.

Instead of trashing the opposing view, ask why the view exists first. Maybe they feel the money’s better spent on improving local roads; perhaps they’ll tell a story of a relative who suffered severe injuries on a street that was in bad need of repair. Or maybe they feel that a park should only be built after other social services are fully funded and operational. Whatever their reasoning, try to get a story from them, and see if there’s a solution you can work toward together.

You might find that you even start getting defensive with yourself in this process but attempt to engage in this from a perspective of curiosity, self-education, and seeking knowledge.

An important step is to write these arguments down to truly see for yourself what both sides are represented by. Try outlining your viewpoints, and then make up arguments against them. Provide the same amount of arguments for each, and directly address the corresponding ones. Flip your Google searches as we did with discovering the loyalty of dogs earlier. If evidence is presented, find it, and search for the opposite if it exists. Remember that evidence is objective, but reasoning and perspective is subjective—yours included!

After all this sweat and toil, you may find out that you don’t believe your original argument as much as you thought you did. And that’s the first step to cracking confirmation bias and starting to think openly. It’s the simple realization that you should leave a 1% buffer of doubt and uncertainty for yourself, and being 100% certain about something takes work that you probably haven’t performed—as you know from Bertrand Russell.

Our refusal to hear the opposing side isn’t a sign of inner strength or resolve—it’s the exact opposite. If we’re so wound up with apprehension about giving an ear to somebody with different viewpoints, we’re already powerless.