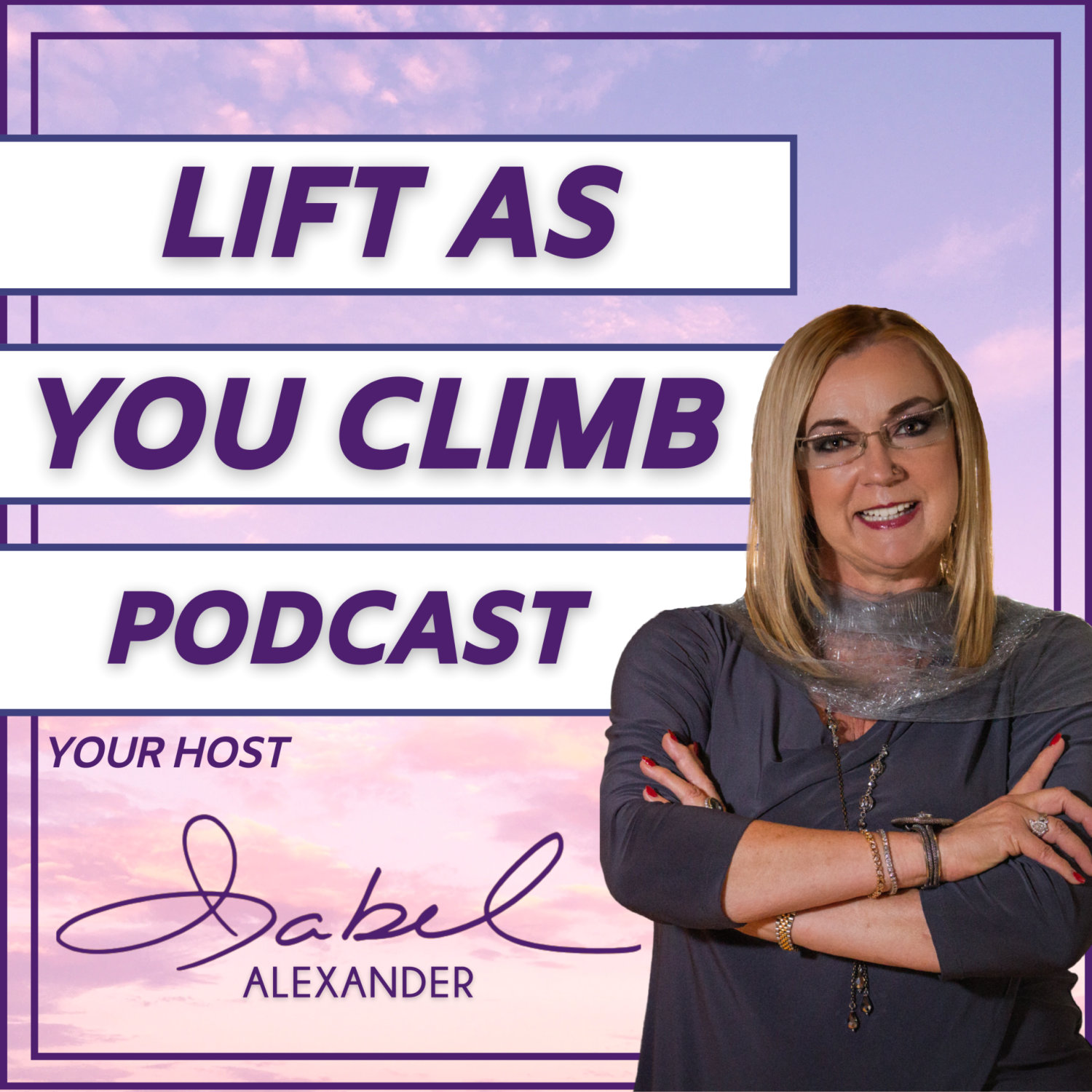 Seriously! Isn't that how society has planned it for us as women in our sixties and beyond, when we reach the “a certain age” stage, we are supposed to just go gently into that sweet night of obsolescence.

What is our purpose now? What will we do to feel valued, create value or receive value for what we offer?

Ready to change the paradigm? Join me and millions of baby boomers that are discovering this may be the best time of our lives!

About the Host: Isabel Banerjee - Your Next Business Strategist and Transformation Catalyst

Dynamic, a self-made entrepreneur who overcame obstacles with an unrelenting positive nature, a farm girl work ethic and a conscious choice to thrive rather than survive, Isabel Alexander Banerjee cultivated an award-winning, $10 million+ global chemical wholesale business and grew it from dining room table to international boardrooms.

Isabel’s strengths include the ability to initiate & nurture strategic relationships, a love of lifelong learning and talents for helping others maximize their potential. An inspiring speaker within both industry and community, she is a driving force behind those with the courage to follow her example of thriving against the odds.

With 50+ years of business experience across diverse industries, Isabel is respected as an advisor, a coach, a mentor and a role model. She believes in sharing collective wisdom and empowering others to economic independence.

Founder of the Lift As You Climb Movement (www.facebook.com/groups/liftasyouclimbmovement)

It means so much that you listened to this podcast!  If you know of anyone else who might find this show valuable or entertaining, please share it on your favorite social media platform.

If you have questions about this episode, please send me an email at Hello@TheEncoreCatalyst.com

If you wish to receive automatic notifications as new podcast episodes are made available, please subscribe to the podcast app on your mobile device.

Every bit of feedback offered to help make this a value-packed part of your week is appreciated.

Ratings and reviews from listeners are used to improve the podcasts.  They also help others find this series in their podcast ‘App’ so reviews are very much appreciated!

Isn't that how society has planned it for us that we are going to reach a certain age or stage expiry date, where we're supposed to just go gently into that sweet night of obsolescence as a woman in your 60s or 70s? retirement, family raised, mortgage paid off career, you know, the last hurrah.

And you're just supposed to expire without an odor, of course. Because what value would we have at this age in our life? Well, that maybe sounds a little dramatic and harsh. But it's kind of the stereotype or the programming that I was raised with and kind of didn't think much beyond that.

I confess, I was as guilty as the next person judging me that I judged older women, as I was growing up, as I was maturing, to be, you know, kind of unnecessary, unimpactful, sometimes inconvenient, or sometimes just convenient, because they were there. They were steady, and they were available for babysitting and asking quick questions.

I wrote an article some time back, just about that. Is there a point of obsolescence where we as baby boomers cease to have any real value to society, to business, to family and friends around us? Our children are adults with very full lives of their own. For many of us, the grandchildren have already reached the age of independence. And they don't need dear sweet Granny to read them a bedtime story. And in our relationships, sometimes we just don't even need or are needed any more. Everyone's gone off to start their own quest in life.

Well, you know, even though I grew up with that sort of “Freedom 55” carrot in my brain, I grew up in Canada, and it was a London Life, I believe, a commercial that set me up to go WOW!; I will have lived a terrifically successful life, if at the age of 55, I can retire from a making any income, gainful employment, live on the savings and the assets that I have accumulated over this wildly successful baby boomer lifestyle that complied with all of the, you know, go to school, get a job, get married, and buy a house, have some kids pay off the mortgage, etc. plan right to the edge of the cliff, until in your late 50s and early 60s, we’re starting to fade from everybody else's radar screens.

Companies up until recently, and probably many, many still, were anxiously walking us to the door to get rid of us before we died in the traces, or that we cost too much money on the health care plan because of our deteriorating condition have our ripe old age.

After all, I earned it, I earned it the hard way. I'd had my own company for over 20 years, and there was a lot of blood, sweat and tears in making payroll and dealing with economic disasters conditions outside of my control, and learning how to be a CEO on the job on the job training.

For sure. Well, I tried that out, okay, I deserve this. After all, that's what they said I was supposed to do. I was over 55. And it was time to slow down and enjoy the fruits of my lifelong labor. After all, I've been working since I was 12 years old and I’m ready to step back and give someone else the opportunity to step forward and rise in my in my place.

I tried that for a while. And rather than feeling of joy, and experiencing that beautiful life that the television commercials from Freedom 55 had portrayed; you know, the lovely couple with the silver hair, with the polo sweaters over their shoulders, walking hand in hand on the beach, or riding together in a golf cart - I found that all of that was possible and available to me.

But it wasn't enough. It wasn't enough to make me feel great about who I was, and what my purpose and value was. Now at this different stage of my life. For a long time, I fought my true feelings because I had convinced myself that that was the role I was supposed to play. And if I didn't have to work, then obviously like, what kind of an idiot was I to say, hey, let me try something new. Let me take on a challenge. Let me take on risk. Let me face the fear of personal growth and learning new skills and deciding how I wanted to make an influence now, and how I would be able to have positive impact.

And all of that remained unanswered for me for a couple of years, until I realized that my search to find those answers wouldn't be satisfied until I answered one other much more critical question first. And that was Who am I now. Rather than trying to conduct my life and, and planning based on who I was attached to the identity who I was attached to what I was quite comfortable with for many years, and I knew exactly what my place was in the world. And my role model was really easy. I had a business card that told me exactly who I was. I had to really stop and look in the mirror, look deeply into my own eyes and ask that question: Who Am I Now?

It was a very emotional process. And you all know already that I have an affinity for words that start with the letter E. And so expiry and emotional and evolutionary are all part of this conversation on how do we make that transition from who we were to who we will become and how do we traverse that unknown area in between.

I certainly was not prepared for that experience in my life. I didn't give a single moment's thought to, what will I do when I am not who I was? What will matter to me?

What will I have to learn? Decide? choose? What skills do I have that transition into what I want to do next?

You know, how important is it to me to slow down or speed up, because, now, if I give myself permission, I have the freedom to do anything I want to. And another huge part of that assessment or evaluation was, who do I need to have on my cast and crew to help me fulfill the script that I can write for myself, and to produce what I call is an encore performance in my life.

I feel absolutely no regrets for the life that I had, and the things that I've experienced and accomplished or failed forward very quickly or slowly. But here I am now at this point going, alright.

How do I figure out?

What needs to happen?

And how do I execute that?

I wrote a book called Who Am I Now? Feminine Wisdom, Unmasked and Uncensored. It really talks about that lifetime journey of getting to be me, at that point, age 65.

Because over the past 10 years, I've talked to other women. And I found out that there was absolutely no reason for me to be hiding in shame and suffering from this identity crisis that I was having. Because I wasn't not alone at any time.

Hell no, not alone, because there are millions of baby boomers that are at this juncture that are going okay. What now? Because we certainly didn't think that much farther ahead. No, no, there was just this like, sort of false belief that I don't know, like in that Dinosaurs show, we're just going to go off the cliff when we reach a certain point. And there's far too much life to be lived to yet.

These are the conversations that I would like to have with you. And with the women that I have come to know that are out there busting up those stereotypes and paradigms, and they are transforming themselves and starring in their lives, doing something that maybe they never ever thought they would do. That would happen because for a lot of our lives, I don't know about you, but certainly for me and many of my friends, we kind of fell into our careers or we were directed and suggested and pushed or obligated or it just got really too hard to leave that predictable income and on the day that you are selling set free from that sense of obligation and sense of being parked there and maybe typecast in your role to where you can freely say, I get to decide how I want to show up in the world now and what my characters truly like, authentically, who am I now, based on this evolutionary journey of 5, 6, 7 decades that we have lived on this planet?

So please, I’d like to hear from you. What are you thinking about for your encore? What you want to do next in life and, and how are you getting through that process of deciding what that's going to be like and how you will produce and direct that successful encore.

I am delighted to be on this journey with you and I will be even happier to give you a standing ovation for figuring out your encore and starring in it!

Unlock your vault, and get your free personal currency assessment tool.
Isabel's Links