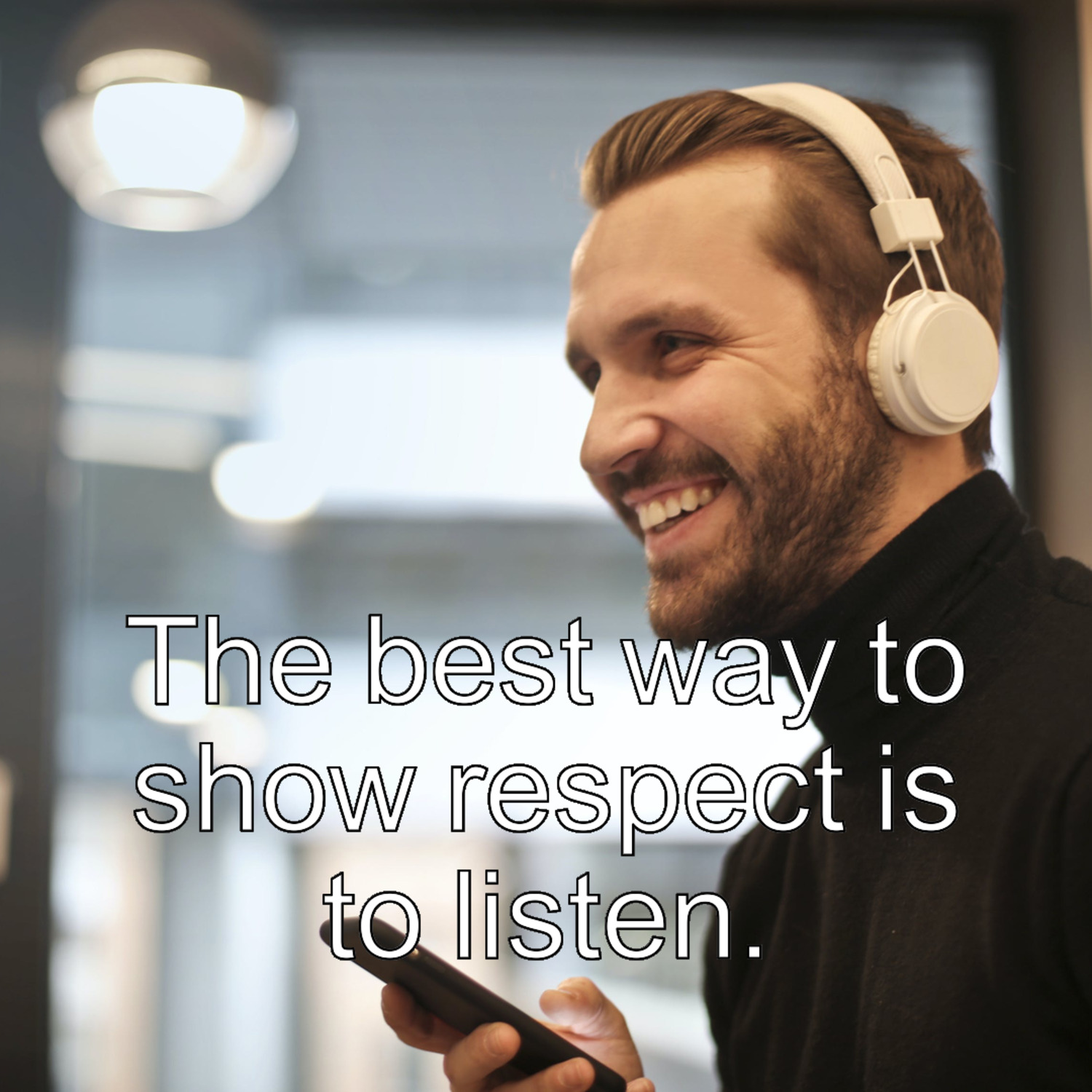 It’s important to avoid using language that triggers defensiveness. This includes things like “what’s wrong with you?” “I’m sorry you feel that way,” “whatever,” “you’re overreacting,” “you’re entitled to your opinion,” or anything using absolute terms like “always” and “never.” These are invalidating and inflammatory and will be met with resistance, emphasizing emotional barriers rather than dissolving them.

• You simply talk most in conversations

• You feel irked and dismissive when someone doesn’t accept your advice or interpretations, wondering why they don’t agree with you

• You find people’s stories boring and have a hard time concentrating, imagining you already know what they’re going to say

• You argue with people about what they’re feeling and tell them not to feel that way (note, this can even be done in a seemingly caring way: “You’re scared? Oh, don’t be silly, you have nothing to be scared of. That’s ridiculous!”)

If you see some of yourself in the above, don’t worry—it’s perfectly human! Good listening skills can feel awkward and uncomfortable at first . . . but that’s where humility and patience come in!

Try to imagine that the conversation is purely an exercise in listening. Don’t think about your response at all until it’s your turn to speak. This means being okay with silence and slowing right down. When you take your time, you also realize that you don’t necessarily have to share every thought or opinion, and you don’t have to cover everything in one conversation. There’s no rule against coming back to the conversation later!

Listening closely for details but also emotional content. If you catch yourself going into Sender mode when you should be receiving, you can always say, “Sorry, I got carried away there! Please continue.” Make encouraging sounds (“Uh huh,” “I see”), but don’t go overboard acting the part of a Good Listener! Just be present. Getting out of your own head and dropping your ego is often a way to reduce anxiety in a difficult situation—and in many ways it’s less work! Try it. It can be such a relief to drop all agendas for a moment and simply focus on the other person.

Watch Out for Conflict Triggering Language

“Can you help me understand?”

In any context, can you see how hearing the above statements dissolves conflict and tension? How it instantly conveys an intention of collaboration and resolution? Well, there are also phrases, words, and terms that have the opposite effect—they trigger and invite conflict.

Words are powerful. Intention matters, but sometimes we can inadvertently communicate blame, criticism, or anger in unconscious or unintentional ways. Obviously, swearing and name-calling are hurtful, but plenty of damage can be done with subtle shifts in body language or tone of voice. Remember that your main goal in healthy communication is to establish connection and bring down emotional barriers. These barriers can be subtle!

It’s pure judgment, and it frames the other person as a problem. Nothing is wrong with them! When you blame others this way, you set yourself up as a default neutral and the other person as the one needing to change. Do this and you can guarantee a defensive response.

In fact, avoid “you” as much as possible, especially in delicate or emotional situations. “You did XYZ” or “you are being unfair” naturally trigger the other person to go into defense, and instantly the barriers come up. In a conflict situation, don’t assign blame or be too quick to diagnose the situation according to your own biases and assumptions. “You’re just like your mother . . .” “I bet you’re loving all this drama!” You are in the situation together, and nobody is “the problem.”

Maybe they’re late again or they’ve lied. You genuinely cannot make sense of their behavior and you’re frustrated. But don’t lash out. Try to have compassionate understanding and ask questions to see why they’re behaving as they are. “You keep doing that even though I’ve asked you not to. Why is that happening? I don’t want to make you feel bad, but it’s frustrating and it doesn’t make sense to me. Help me understand what’s happening here.” This way, you truthfully express your frustration without making the other person wrong.

What a way to dodge accountability! This is a statement almost guaranteed to infuriate people, along with related statements such as “I’m sorry you got hurt” or “I’m sorry you misunderstood what I was saying.” If you tend to say this, be honest; chances are there is a covert desire to communicate the very opposite of “sorry.” Don’t be passive aggressive!

If you squeeze in that “if,” you’re invalidating the other person and making their grievances seem trivial, doubtful, or even hypothetical. If someone says, “I’m hurt,” and you say, “I’m sorry if you feel hurt,” you have effectively negated their statement. They do feel hurt; there’s no “if” to it!

Phrases like this absolve you of responsibility and throw the blame back in the other person’s face . . . and they’ll likely only feel angrier. For similar reasons, avoid saying, “I’m sorry, but . . .” Think of but as a word that cancels out everything that came before it. Instead, commit to stopping the sentence before the but. “I’m sorry.”

Instead say, “I’m sorry I hurt you/did that.”

Apologize without caveats, conditions, or qualifications. As we’ve seen, owning up fully to your responsibility is the best way to apologize. A weaselly half-apology that puts underhanded blame on the other person is actually worse than no apology at all.

Remember that people’s realities are as valid as yours. They feel what they feel, and it’s never up to you to sit in judgment of those feelings or make evaluations on whether you think they should be allowed to have them. Never, ever tell people they are “overreacting.” This is often said as an underhanded attack to invalidate and diminish the other person—passively. Don’t do it! Especially don’t do it if the other person is upset precisely because of something you’ve done.

Try not to be that person who takes secret pleasure in rattling or upsetting others while you sit calm and composed, feigning shock at their strong, out-of-control emotions. This is a power play, plain and simple. Even if they can’t articulate why, people can sense this and will respond defensively.

Don’t push people and then claim you were “only joking.” Don’t rile people up only to act like their valid anger is somehow the problem and not your provocation. Finally, avoid the incredibly damaging habit of framing your own perspective as objective fact while labeling the other person’s perspective as “irrational.” Saying things like “I’m just being logical here” or “calm down” is emotional warfare and will get a predictable result—you’ll inflame the situation, lose trust, and come across as a jerk.

Instead say, “I understand why you feel that way.”

When you are a properly differentiated person, you allow other people to have the emotions they have. In fact, you never even consider that it’s in your scope to permit anyone to feel what they feel in the first place. You’re secure enough in yourself and your own feelings not to jump in and judge, interpret, or analyze. You realize that it’s simply not your job to decide whether you agree with them or not, or whether they are right. The point is only to hear and witness.

Using absolute terms is a way of painting the situation or the other person in a broad brush, either to feel superior and righteous or to simplify a complex situation.

Instead of dumping negative feelings on the other person (and inviting a retaliation), clearly state what you need in that moment. “I feel like all the housework falls on me and I’m exhausted. I feel so sad, like my time isn’t important. What I need is for you to do your fair share of the chores.” Extreme statements are like spears, and often they’re hurled to hurt the other person rather than reach an understanding. If you’re hurt, say so. Don’t launch into blame or foregone conclusions. Remember that it’s possible to feel hurt without someone hurting you.

In a healthy conversation, both parties take responsibility and both show up as full participants. Saying, “I don’t mind/care” or “you can choose” is a sneaky way of absolving yourself of responsibility while pretending to be accommodating. For bonus damage, say “I don’t mind” when you do mind and then subtly punish the other person for not doing what you wanted!

Trying to duck out of the conversation is, in fact, a hostile act and signals to the other person that you want them to take on all the emotional labor, or that you will agree to go along, but will drag your feet and make them regret expecting anything from you. This is no more sophisticated than a child throwing themselves on the floor and refusing to move when they’re unhappy.

Not having an opinion, not making a decision, and not pulling your weight puts the burden on the other person and indirectly communicates a dismissive attitude to the maintenance of that relationship. It’s a recipe for resentment—on both sides.

Instead say, “Give me a moment to think about this.”

It’s okay to feel unsure or undecided. But don’t wriggle out of active, adult participation in your relationships. Ask for time to think things over or make your decision—but don’t forfeit your responsibility or your right to a decision. Commit to a position and then stick to it. Be honest if you’re trying to avoid conflict or disagreement by being “easygoing.” If so, you might need to speak up about your desires, or simply accept that there is sometimes disagreement. Look for compromises. Don’t be afraid to put forward your own idea or suggestion.

By now you should be able to recognize this word for what it is: an attempt to make your reality and perspective the “right” one so you can correct and educate everyone else. Arrogant, right?

“Actually, it was only the last three times.”

Using “actually” this way is a sign of viewing the conversation as a fact-finding mission, and a contest to establish the most correct (often, the most intelligent) person. Be prepared to encounter resistance and defensiveness. In the above exchange, the intended content is being completely ignored while the person fixates on a largely irrelevant detail. It’s not a quiz show, and there are no points being awarded.

Listen for the emotional content, instead, and avoid “correcting” people on things that are not really in the realm of objective information in the first place. It’s a bad idea to try to and inform people what they think and feel, or assume that you’re entitled to educate them about their position. This is especially egregious when the person you’re talking to has an experience or perspective that you can genuinely never understand, or if they have a legitimate grievance with you.

Instead say, “I see things differently.”

It’s not about facts. Don’t pounce with glee on people’s small mistakes. As they say, would you rather be right or be happy? Sometimes, that’s really what it comes down to! If the fact doesn’t matter, then just drop it.

Ah, how kind and generous of you to grant someone permission to have their own opinion! As king of the universe, that’s awfully nice of you. Jokes aside, this and related phrases (“You do you!” or, “Well, if that’s what you want to believe . . .”) are solid gold invalidation. You won’t come across as tolerant—quite the opposite.

You don’t need to tell someone you respect their opinion. Show them. The best way to show them is to . . . listen.