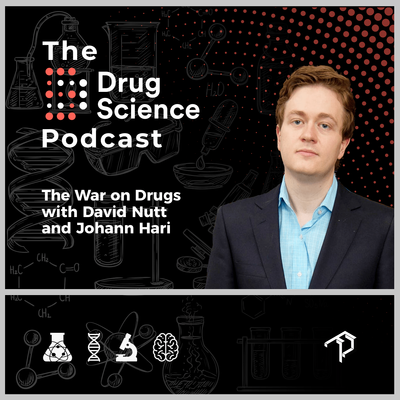 24. The War on Drugs with Johann Hari

This week, Professor Nutt speaks to journalist Johann Hari @johannhari101 about the ‘war on drugs’. It is now widely accepted that the ‘war on drugs’ has failed, with many people believing it can never succeed. Despite this, politicians from around the world continue to follow this mantra as an effective strategy to reduce drug-related harms. The reason why… politics.

Currently, it is politically damaging to support the legalisation of drugs because public discourse has been led to believe that legalisation will cause anarchy and chaos. Contrarily, what we have now is a complete lack of control. Legally regulating the supply of drugs is the only way to bring order to this chaos.

Johann Hari is the author of two New York Times best-selling books. His first, ‘Chasing the Scream: the First and Last Days of the War on Drugs’, is currently being adapted into a major Hollywood film by Oscar-winning director Lee Daniels, and into a non-fiction documentary series. His first TED talk, ‘Everything You Think You Know About Addiction is Wrong’, has been viewed more than 40 million times across all platforms. He has written over the past decade for some of the world’s leading newspapers and magazines, including the New York Times, the Los Angeles Times, the Guardian, the Spectator, Le Monde Diplomatique, the Melbourne Age, and Politico. He is a regular panellist on HBO’s Realtime With Bill Maher.