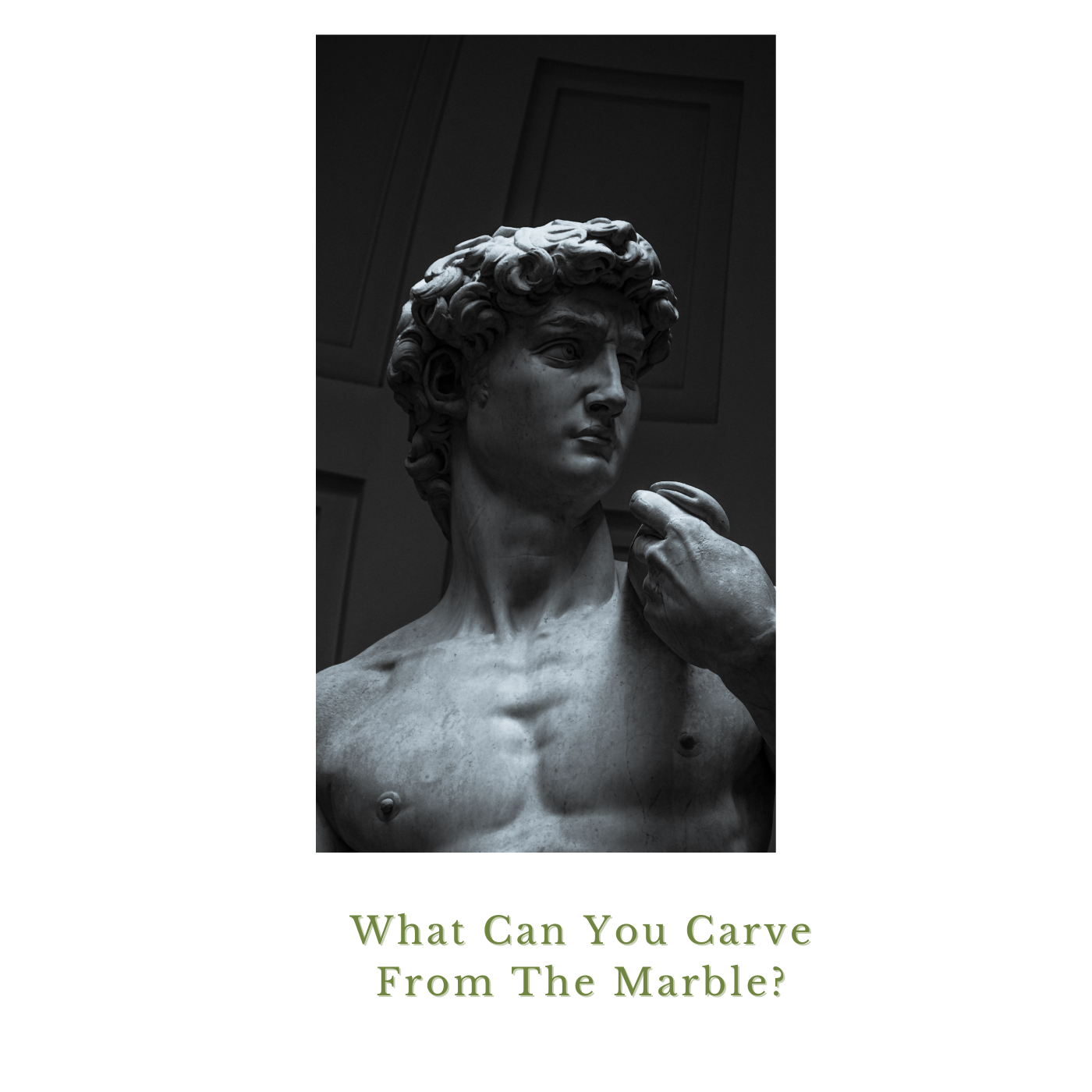 What Can You Carve From The Marble?

Good evening and welcome to my humble podcast abode. I am Cocoa Griot, a fifty-something who loves spending time with you to talk about life, love. and a host of other topics. The statue of David carved by Michelangelo is an incredibly beautiful work of art. There are some things about this statue many people don’t know. They admire its beauty, but the story of how the statue came to be is remarkable as well. We have all heard the saying that one man’s trash is another man’s treasure and the statue of David exemplifies this for sure. The statue was carved from a single block of marble that had been determined as unusable by two sculptors before Michelangelo took to carving the statue. This piece of marble sat for almost 40 years before it was transformed into the statue of David. This quote by Michelangelo is the inspiration for tonight’s question. "I saw the angel in the marble and carved until I set him free." Tonight’s question for you dear listener is what can you carve from the marble?

My interpretation of the marble comes from the characteristics of the marble David was carved from. The first thing I pondered was what seems fixed sometimes to others, is not necessarily true. At the beginning of the school year sometimes a student’s previous year teacher would come to me and share their thoughts about that particular student. This was not usually a positive report they would share. I would smile and just say thank you, but I am looking forward to getting to know the student. Nine times out of ten my relationship with that student didn’t even remotely resemble the warning message I was given about him or her. That teacher just saw the marble and was frustrated by what they deemed as imperfections in the marble. I found that kids loved having fresh starts and it was never a good idea to start off the school year saying, I heard this or that about you if the information was negative. Carving the marble of respectful interactions led to a good experience for the student and mef.

Another aspect of the marble was that it was discarded by others that did not see it had value. I will never forget my experience of being a teenager and dating someone in their twenties. I was smitten, and super naive. I actually thought if words came out of a person’s mouth, they were sincere. It never dawned on me that people would sometimes just say what they think you want to hear in order to get close to you. When I found out the guy had an entire harem, we broke up. I related the story to my friend James. He said,” If you give me a chance, I will never hurt you like that.” You know what? He didn’t. He became my boyfriend and subsequently my husband. Even though I had no value to the man I had been dating, my meant-to-be husband saw my worth and treasured me. If I waited around for the other guy to acknowledge my value, I would have missed out on the person who recognized it right away.

The last point I want to make about this quote involves not being overly influenced by the opinions of others. If Michaelangelo had allowed the opinions of other sculptors to shape his thoughts about the marble, he would have never touched it. We live in an age where we allow the opinions of others to override our own beliefs. How many of us will not try a restaurant because it does not have enough stars in its Google Review? How many times have you avoided people because of what someone else said about them? We can miss out on truly wonderful experiences because we allow ourselves to be guided by the opinions of others. No doubt Michelangelo had a daunting task when it came to carving this statue. He took on the challenges and there were many. One of the things I admire him most for is not being defeated in his mind before attempting to carve the statue. What is the marble in your life today? What can you carve from that marble?

Thanks for listening this evening and as always I wish you good health, good fortune, and a good night! Cocoa Griot out!