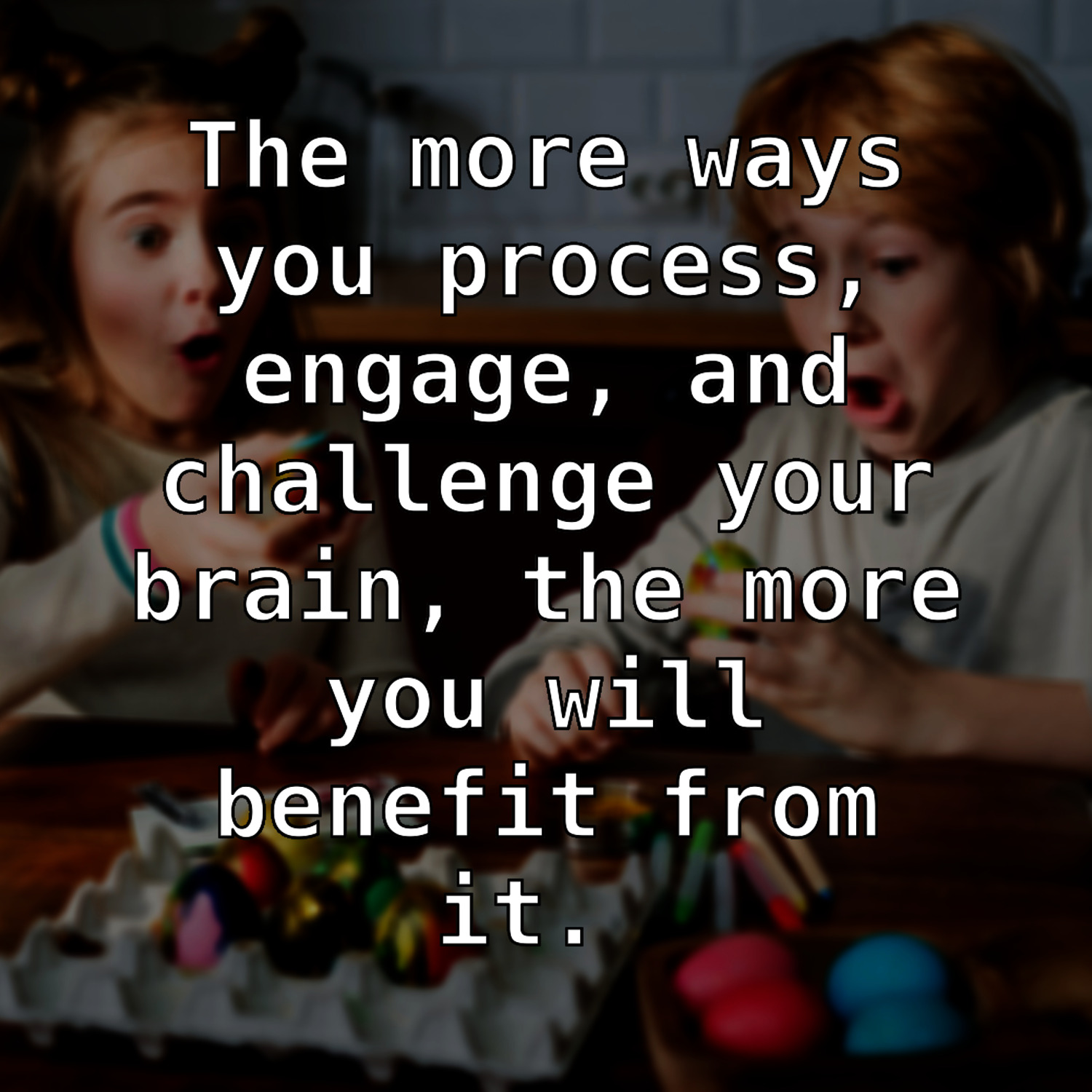 Speaking of more neural connections, learning how to play an instrument or speak a new language literally activates dormant or underused parts of your brain. These skills provide different types of adaptations, and teach you patterns and processes and how to apply them to other areas of your life. They are both truly whole-brain activities that require integrating multitudes of new information and even muscle memory.

Best of all, this type of neural growth can transfer to other disciplines and practices.

Finally, what about just reading or saying information aloud? This simple act has been shown to improve thinking, cognition, memory, and comprehension through something called the production effect. Information reproduction requires a significant amount of active participation and engagement. As is this chapter’s theme, the more ways you process, engage, and challenge your brain, the more you will benefit from it.

Get the audiobook on Audible at http://bit.ly/brainboostblueprint

You don’t need to buy an app or game that promises to boost your cognitive powers— simply pick up an instrument. Learn to read music. Master the technical skills needed to make music, and practice every day. Listen to other peoples’ creations, or make your own. Musical training has been shown to be incredibly beneficial for brain health, and it engages and challenges our cognitive abilities in completely unique ways. Music builds fluid intelligence that you can “spend” elsewhere.

Playing music doesn’t just take manual dexterity. It integrates our emotional experiences, our senses of vision, hearing, touch and fine motor control, memory, creative expression and more. Brain scans in research by Gottfried Schlaug and colleagues has shown that the corpus callosum is significantly larger in musicians compared to non-musicians. This area connects the left and right hemispheres in the brain. Researchers know that it is in fact playing music that increases corpus callosum size, since those who begin with no training will show an increase over time if they train musically compared to those who do not.

What’s so special about increasing the size of this part of the brain? Well, the brain always benefits from increased overall gray matter, and especially from increased connectivity between different regions— after all, this is how our brains work, not as static components but dynamic and interacting units that communicate constantly. Research by Agnes Chan et. al.

has shown that musicians outperform non- musicians on verbal, memory and spatial reasoning tasks—there’s that fluid intelligence again! The researchers additionally found that the younger the age a person starts musical training, and the greater the intensity, the more their brains change physically to adapt. Children’s brains are more plastic than adults’, which is why children can benefit from even short musical lessons when they’re young, even if they never go on to play in adulthood.

But if you’ve missed the boat, don’t worry: music training has benefits for everyone, regardless of age. It may even help patients recover from stroke and other forms of brain damage, or help adults with dyslexia or other speech or learning problems.

Specially designed brain apps and games really only train crystallized intelligence— in other words, they’ll make you better able to do that particular task, but they won’t necessarily make you more competent at other tasks. Something like music training, however, depends heavily on and improves fluid intelligence. The effects are far reaching—not to mention the increased relaxation, sense of personal accomplishment, or even the social pleasure of playing with friends.

Music is something that can tie together so many of the brain-boosting habits and techniques we’ve already covered. It’s no exaggeration to say that musical training is one of the very best things you can do for your brain, even if it has nothing to do with your chosen area of expertise. The brain has the marvelous ability to adapt according to what it’s used for. We can exploit this by making sure that we’re always challenging ourselves by learning new, different skills.

Join a band, sign up for a weekly lesson in a completely new instrument, dedicate some time to learning to read music, listen to music when you can, and when you play, become aware of all the marvelous parts of your body, mind and soul that are engaging to create this wonderful language we call music.

Languages And speaking of languages—if you guessed that learning a new one would enhance your fluid intelligence, you’d be right.

Researchers at the University of Edinburgh released an enormous study showing the link between being bilingual and reduced progression of dementia. Humans use the left hemisphere of their brain to process and store language, including specialized areas dedicated to speaking, learning new languages, and comprehending words and sounds when they’re heard or read.

Language learning is a complex, whole- brain activity, however. There’s so much involved: hearing the sound of a word, seeing how it’s written in letters, understanding the grammar rules, knowing how to form the sound of that word correctly in your own mouth, learning how to express yourself properly and knowing when the rules can be broken. Interestingly, where and how language is stored depends on the age at which that new knowledge is acquired. What this means is that language acquisition is not necessarily fixed, and can adapt and change over the course of a lifetime.

Whether it’s learning to play the violin or chat in French, playing with the brain’s plasticity not only has direct benefits for the task in front of you, but may mean you resist the onset of age-related cognitive decline, and increase your performance in every other area of life where your brain is needed. Your brain isn’t a fixed structure— it’s alive and changing, adapting constantly to your demands and evolving with each new challenge. No matter how old you are now, it’s possible to repair old neurons, create new connections and physically alter the shape of your brain.

Keeping your brain limber and agile is not so much a matter of sitting down in front of a book or screen and forcing yourself through a dry or difficult academic exercise.

It’s not about any one single skill, either.

Rather, a well-rounded brain is one that is fluid and responsive, able to adapt to the tasks the environment demands of it, and always with hearty doses of humor, personal significance, curiosity and creativity. In the end, it seems like all those aspects we’ve typically placed to the side of the standard school curriculum— languages, music, art—are far more central to our mental well-being and intelligence than we thought.

If you only know one language, don’t despair. It’s the effort made to learn something new that matters. Commit to learning throughout life, in small ways every day, and your brain will not only stick around to help you, it will rise to the challenge and may even surprise you with what it can do. Leave your comfort zone, and don’t be afraid to make mistakes or be a beginner—it’s all part of the learning process. A few minutes on a language app, a TV program in an unfamiliar language, or a new friend who can chat with you in another language might not look like supreme brain workouts, but they are! In just the same way that eating a special superfood or getting plastic surgery isn’t the ideal strategy for improving your physical fitness, you can’t expect just one trick or brain game app to drastically boost your brain power overnight. Rather, think of maintaining and developing your cognitive and intellectual health as a long- term project that you approach holistically.

Keep physically, emotionally and even spiritually healthy; give your brain plenty to do and don’t be afraid to push yourself; incorporate generous rest periods and make it a habit to engage with your creative self. In other words, support your brain, and it will support you.

If it’s your memory you’d like to improve, there are now countless proven techniques and approaches that can help you study better, learn better and simply remember more of your day-to-day life. Using mnemonics, chunking exercises, emotional cues or varying the form new material takes (e.g. words, pictures, sounds) can all help you to remember better by working with your brain’s mechanisms rather than against them.

What’s so special about reading aloud? Well, probably nothing. The interesting thing is that the participants who read all their words out loud were actually no better off than those who studied the whole list silently.

Why on earth should reading half the list aloud have the best recall rate? The researchers hypothesized that doing so helped create more distinctness for the words being remembered. In other words, our brains are much better at noticing and remembering information that stands out. If you were trying to memorize a list of words and one of them was printed in red ink while the others were in black, you almost certainly would recall that red word more easily. It’s distinct. This is the same principle.

The effect the researchers discovered may come down to the fact that reading some words aloud marks these words as different somehow, and more noteworthy of attention and remembering. By speaking them aloud, you’re distinguishing them from the other words. The “production” in “production effect” refers to the fact that you are actively producing some words as speech, so now you have two bits of information about each word: the visual word to read quietly, and the sound of the word spoken aloud.

The production effect is so useful because you are essentially expanding your knowledge about each item you need to remember, setting each of them as more distinct and clear against one another. How could you use this effect yourself when studying? Simple: pick out those very important bits of information from your material and make a point of speaking them aloud to yourself. It’s likely that the conscious effort to mark out the material this way pauses your brain and tells it deliberately, “Remember this, this is important.” However, there’s no reason that the production effect has to be limited to reading aloud. You can play around with exactly how you make certain bits of data in your surroundings more distinct and pertinent. Use your other senses besides sight and sound—link gestures or even emotional states to some bits of information. Literally pause in your kitchen and tell yourself out loud, with gestures, what five things you need to buy at the store. Notice how easy it is for your brain to recall this entire memory with all its quirky details when you’re later walking the store aisles.