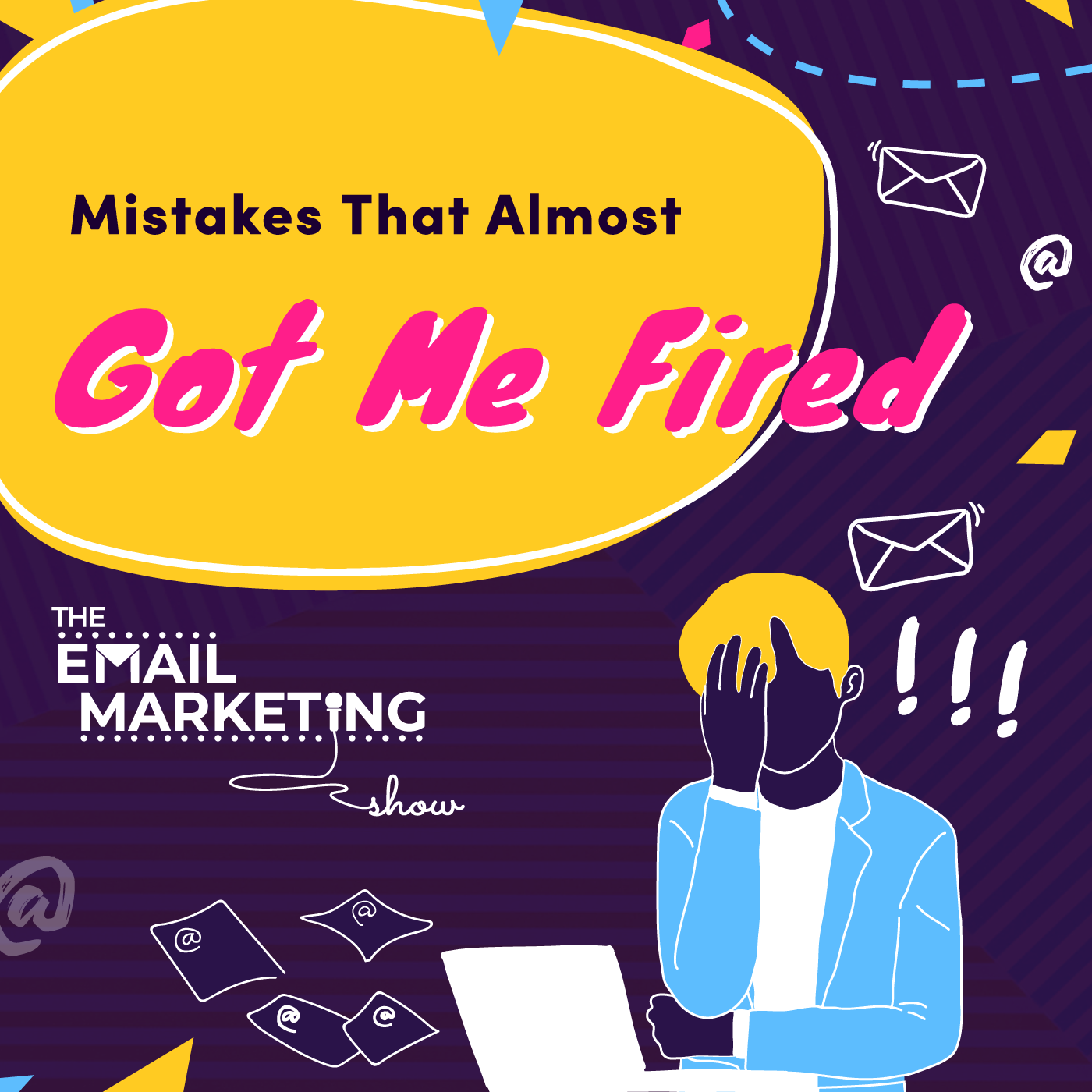 Did you ever set up an email marketing campaign and forget to write the email? Or sent the wrong email to the wrong people? We've made loads of email marketing mistakes in our time, and today's guest Chris Davis from Automation Bridge shares his. Having trained internationally, Chris has a collective portfolio of $200 million raised for startups and currently runs the only marketing automation certification in the industry.

If Chris made a train wreck (or two) of his email automation here and there, then you'll know it happens to the best of us. But here's how to deal with any mistakes and what to do to avoid them.

You're going to enjoy this!

(0:33) Want to make your sales from your email marketing? Grab our Click Tricks.

(4:04) Did Chris really meet his wife while skydiving in Canada?

(8:14) Should you apologise to your subscribers for your mistakes?

(9:36) Sending the wrong email to the wrong segment.

(13:31) Owning your mistakes and putting proceses and systems in place.

(14:41) The creator isn't in charge of quality assurance.

Want to get more sales from your email marketing?

We put a little something together for you. It's really cool and it's FREE (yes, it's cool and free – we're nice like that). If you want to make more sales from your email marketing, you need more clicks on the things that you're selling!

That's why we're giving you 12 creative ways to help you get more clicks in every email you send. It's a FREE download, and it's called Click Tricks. You can grab it here.

Sending two identical emails in the space of 10 minutes

Chris has had some amazing positions at brilliant companies where he's always been involved in email automation, so he has a lot of experience. But has he ever messed it up? Oh, yes!

The reason why we wanted to talk to Chris about the mistakes he's made in email marketing (and the lessons he learnt along the way) is that when you reach his level of expertise you tend to take bigger risks. And that means the impact of making mistakes can be bigger.

A recent mistake Chris made is when he built an email automation but forgot to put the email in. When he realised he'd done that, he added the email and sent it again. But for some reason, he also created a separate campaign and added it to the automation.

The result? Subscribers got two identical emails in the space of 10-15 minutes. And we've definitely done that (as well as sending emails with a broken link or with no link at all!)

Should you apologise to your subscribers for your mistakes?

That's the question, right? What do you do in that situation? Did Chris apologise? Something that Chris learnt while working in the startup space is that the preference, when something's broken or there's a flow in the system, is to deal with the support tickets as they come in. In other words, if your customers don't notice and don't complain, you don't go out and tell them what went wrong. Plus, in this case, the only thing that's worse than getting two emails within 10-15 minutes of each other is getting three!

But there's definitely a lesson to be learnt here - double-check your emails before you drop a whole segment of subscribers into an automation and press send!

Chris shared another mistake that he made right at the start of his email career when he was working at LeadPages. At that point, he was sending emails to about 250,000 leads per email. To this date, he gets so nervous about making a mistake that he will double-check and triple-check that he's sending the right email to the right group of people.

But there was one time when Chris didn't do that. In fact, what he had done was send the wrong email to the wrong group of customers! In that email, he had effectively offered them a product that those people had already bought at a lower price. And he hadn't even realised!

When he walked into the office the next day, he noticed the support team seemed super busy. And there Chris was, assuming the product was selling! But when he walked into the marketing meeting, the founder asked the (rhetorical) question of who sent the email. It was accusatory and filled with frustration because everyone knew that Chris sent all the emails! And that's when it dawned on him that he'd made a mistake.

Owning your mistakes and putting processes and systems in place

So did Chris own up and apologised to the team? He totally did. He didn't over-explain the issue, but he told everyone that he'd got mixed up with the tags and identified the wrong segment. Because when you make a mistake, Chris told us, you don't want your name to be tied up with ignorance. If you can explain what happened, then you can ensure it won't happen again and start to rebuild your reputation.

What we do when we make mistakes is to put systems in place to try and stop these errors from ever happening again. Of course, that doesn't mean you'll never make another email marketing mistake in your life because there are loads you haven't thought of yet! But processes and systems help.

The creator isn't in charge of quality assurance

Something that Chris has now implemented (where possible) is to differentiate the role of the creator from the role of the person performing quality assurance. In other words, the person who writes the emails isn't the one who also checks them. Because when you create something, you’re very close to it, and you can't look at it with objectivity and perspective.

If you're both the person who creates the emails and also checks that everything is in place, chances are that you're going to miss something. Because you're too close to it. And when Chris realised that he was much better at the quality assurance aspect of things, he hired someone at LeadPages to write the emails. That way, he added a separate step in the process of creating an email automation.

So if you're a business owner doing email marketing, can you bring in a VA to do one of these jobs for you? You could write the emails and have someone else check them for you or vice-versa. Or you could outsource the tech. Whichever way you choose or works for you, the key is that one person fully focuses on one task. And that means that's all they have to think about.

Put some space in between tasks

If you're a one-person band and can't hire someone, then the tip is to break the tasks down and separate them. When you're writing your emails, you're using the creative part of the brain. But when you're doing the segmentation, you're using a different part of your brain. So put some time in between tasks. It could be an hour or an afternoon, but preferably a whole day, if you can.

This is where Chris went wrong when he sent that email to the wrong segment. He was operating in a silo, not sharing anything with the team, and doing all the different tasks of creating the emails and working out the tags and segments himself. That's how he didn't even realise he'd made a mistake! Instead, he should have involved the team or waited until the next day to finish the project. So give yourself some time in between tasks and come back to it with fresh eyes.

What Chris shared with us definitely puts things into perspective. Because when he made that mistake at LeadPages, he was sending out emails that could generate around $20k per email. There was a lot of gravity attached to his error! But he owned it. And now that we know the rest of the story, Chris didn't get fired. It was just the start of a profitable and successful career in email marketing automation.

Subject line of the week with Chris Davis

Chris’s subject line is “strange question?” It's one he used in the early stages of his career when he'd reach out to people to help them figure out what was wrong with their email marketing. But instead of critiquing them and approaching them by saying they were doing something wrong, he’d use this subject line. Chris told us it had a 99% response rate because people couldn't resist – they would open the email because they wanted to know what the strange question is.

And inside the email, Chris would be asking if the recipient was the right person to talk to. That plays on another useful psychological trigger, which is that everybody wants to be the right person. So even when they're not, they’ll say it’s not them. But at least you've opened up the lines of communication, and now you have a response and a conversation going on with someone.

This subject line also uses our concept of compound curiosity, which is something we talked about in a previous episode. You can check it out here.

If you want to learn about the right way of doing automation so it works more effectively for you, he has a 5-point automation checklist that will prevent you from making those same mistakes that Chris made. It's the resource he wishes his past self could use!

So go and grab Chris’s checklist, print it off, and keep it front and centre every time you build an email automation. You can find it here.

Why You Need to Avoid These Email Marketing Mistakes.

How to Pick an Email Automation System.

If you want to write better emails, come up with better content, and move your readers to click and buy, here's how. We put together this list of our Top 10 most highly recommended books that will improve all areas of your email marketing (including some underground treasures that we happened upon, which have been game-changing for us). Grab your FREE list here.

If you want to chat about how you can maximise the value of your email list and make more money from every subscriber, we can help! We know your business is different, so come and hang out in our FREE Facebook group, the Email Marketing Show Community for Course Creators and Coaches. We share a lot of training and resources, and you can talk about what you're up to.

This week's episode is sponsored by ResponseSuite.com, the survey quiz and application form tool that we created specifically for small businesses like you to integrate with your marketing systems to segment your subscribers and make more sales. Try it out for 14 days for just $1.

Not sick of us yet? Every day we hang out in our amazing community of Email Marketing Heroes. We share all of our training and campaigns and a whole bunch of other stuff. If you're looking to learn how to use psychology-driven marketing to level up your email campaigns, come and check out The League Membership. It's the number one place to hang out and grow your email marketing. Best news yet? You can apply everything we talk about in this show.

Thanks so much for tuning into the podcast! If you enjoyed this episode (all about the email marketing mistakes that nearly got automation guru Chris Davis fired) and love the show, we'd really appreciate you subscribing and leaving us a review of the show on your favourite podcast player.

Not only does it let us know you're out there listening, but your feedback helps us to keep creating the most useful episodes so more awesome people like you can discover the podcast.

And please do tell us! If you don't spend time on email marketing, what do you really fill your working days with? We'd love to know!