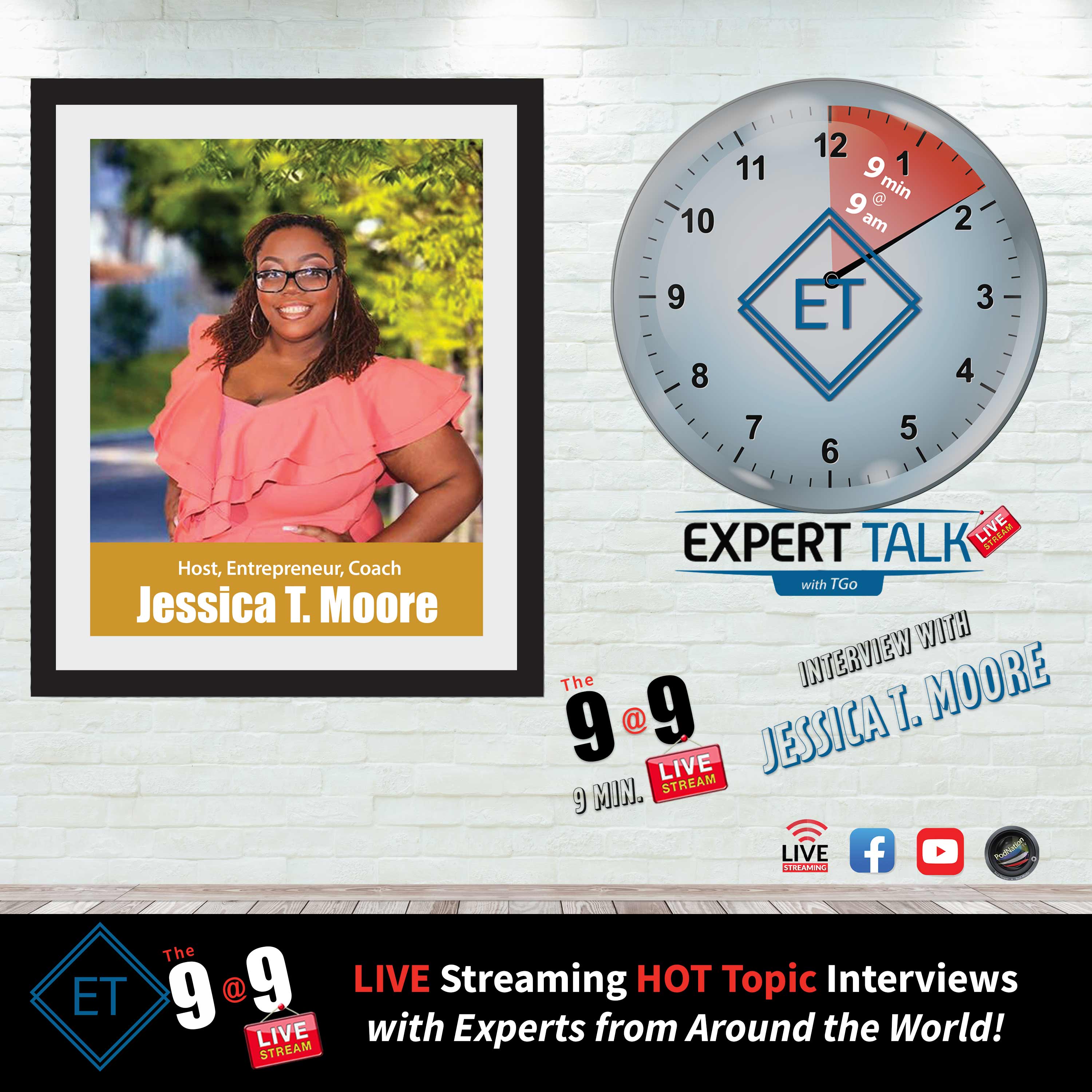 Jessica is making a global impact through her nonprofit organization... Lead Our Teens, Inc. Her mission for Lead Our Teens is to educate people, give hope to teens and collaborate with the community to bring awareness and help teens aging out of foster care using her platform The Jessica Moore Show.

Hey everybody, welcome to the show. You know where you are 9 @ 9 with me TGo. And if you just heard me talking to Allen in the background. Yeah, that was me forgetting we were live on the show, but Hey, stuff happens when you're live. We're going to skip all that. We're going to talk about Foster Care and aging out of the system.

We're going to talk about childhood trauma, but we're also going to talk about fun stuff. Like new books coming out. Les Brown. Yeah. I got a great guest coming on. My good friend, Jessica T Moore you out there. What's happening. Hi! What's going on, lady. How you doing? I am so honored and happy to be here. I'm super excited.

So I'm doing amazing. This is the first time. You and I have gotten together publicly since your summit almost a year ago. And I just want to thank you for having me be a part of that. It's been amazing to watch just how you're growing and changing your, your, your organization is growing. You got book stuff going on. We've got so much to cover before grumpy Allen cuts us off.

Yes. Yes. All right. So tell me one let's let's let's just start off foster agency. Are you, are you still doing that? Is that your business? What are we doing? Yes. So I am the founder of Atlanta Youth Services, which is a Foster Care and Drug screening agency. So I'm the Founder. My husband actually took over the business,

so he, he runs everything. I help him. So I'm the visionary behind it, but my husband is the one who's actually out in the field doing the work. Well, all right, then. All right, then now tell me this. Wait, before I even go there, you know, my better half, who's also one of our business partners.

She never gets to be on the 9 @ 9 live and she's actually out there making comments, Hey, what's happening? G, I'm so excited. And she says she usually watching this stuff in post. All right. So now that we've done that, let's talk about aging out of the program. You know that we called it back in the day,

the black garbage bag day, because you come home and you're 18 and th the foster parents have put all your stuff in black garbage bags and set them on the curb. Is that still the case? So in some states, yes, in Georgia, the children in Foster Care actually get services up until they're about 21 or 22. So when you turn 18,

So I get to do all the fun stuff, like help the teen girls to be able to start different businesses like YouTube channels and all that good stuff. So yeah, they do go into apartments to kind of prepare them to enter into the world a little bit later than 18. Okay. So I hear what you're saying, but you know, being in the foster program,

you and I have talked about it before. I've publicly talked about it all the time. I was blessed to be adopted at six months, but I still had, according to my Mother, you know, some interesting stuff happened when I was from zero to six months. I can't imagine going through the whole program, you know, until I'm 18 years old.

What if you have behavioral issues when you're younger and then as you grow up, you know, maybe you're 16, 17 years old, the light bulb goes off and you say, wait a minute, hold on. I need to get my act together. Is it ever too late? So for the most part, they do a lot of interventions, but by the time,

So the kids trying to get, to be able to do transitional, if that makes sense at 14 and being from 14 to 16, they try to get the parts of like 16 to 18. So you go through phases. It's not just like one, it is different phases that you go through to get to. So they do everything I can to make sure that you like,

when it kind of behaviors, it's not like behavior issues. It's more going to jail, theft. You know, stuff like that, not just mad and we don't know what to do about it. It's like, like teenage got an attitude because that happens everybody. I'm sorry. I had one when I was a teenager too. Yeah. Yeah. So when you,

they have typical issues, that's why we have behavior aides coming out. But when it gets to that point where, where you want to tell her, you know what I'm saying? It's not like, say, wait a minute. I totally I get it. I totally get it. Now, before we get too far down the line and we run out of time,

where can they find you? How do they get in touch with you? You know, where are you located? So you could go to my website at JessicaTMoore.com. I do have a program, which I'm super excited. So we got time to get into that. Yeah. So JessicaTMoore.com Okay. Okay. Can you give us a little hint about the program?

Yeah. So pretty much what I did, like knowing that a lot of that, like I work with older children. Like some of them are around 21 years old. So what I did is trying to figure out how I can create a movement pretty much where I could help address some of those issues. That's not addressed in the system. So I created a program it's called the Own your Story Challenge.

And it's a book program that goes with it. The book is called Embracing your Perfection. The first book actually launches in October on October 16th. And in that book is Women. Some of them have been adopted. Some of them have been in Foster Care, experienced abuse. So they're now adults. And they're talking about their childhood, how they overcame their trauma.

And it basically talks about what the long-term effects of trauma and how they got through it. So that's like my way of, once you get out, my goal is to have this program as a part of our business where the birth parents and the teens aging out of care, go through a process of writing and telling their stories because it was very therapeutic.

We had sessions where people cried, you know, use my degree, but create a movement online at the same time. I Love it. I love it. I love it. And you know, what's weird is that my, my Mother rest her soul, her birthday's October 16th. Aww. Yeah. So that date means a lot to me. I'm like, wow,

that's pretty powerful. So this is your book, right? But this is also your show. Yeah. So I'm not showed the Jessica Moore Show. Same thing. We talk about overcoming obstacles in life and how people got through it. So my goal is really to help people embrace it and perfection and truly own it. I've been through a lot of my childhood.

Now I own my story. I use my story to give back and to help other people. And on my show, we do the same thing. Just talking about, you know, how we got through those obstacles and how you can too. You know, we have good friends. They own a program here in Vegas, Nevada called Our Family Strong Cory and JoJo,

They're awesome. Foster parents, adoptive parents. They've I think they've had 30 kids go through their home. It's amazing. We're working on a docu-series. We're going to work on a docu-series about Foster Care about adoption. I hope you'll be a part of that. Yes That would be awesome. Yes Awesome. If Cory and JoJo are not watching which they should be,

if they're not watching, I'll make sure I tell them about it. Okay. So before we run out of time, we got like 30 seconds. You got a big book with a big person that I'm a super fan of. What Is that? That book is called Ignite the Hunger in You by Les Brown. And that book in that book, I talk about my childhood and some of the instability and the things that I went through that led up to me starting my agency.

So yes, definitely that book comes out and on October 4th October 4th I think Yeah... See what I mean Jessica, he is just rude. I want to thank you for being on the show. I hope you'll come back soon, we touched on this, the tip tip, tip of the iceberg of what Jessica T Moore, JessicaTMoore.com is doing out there for Foster Care for kids,