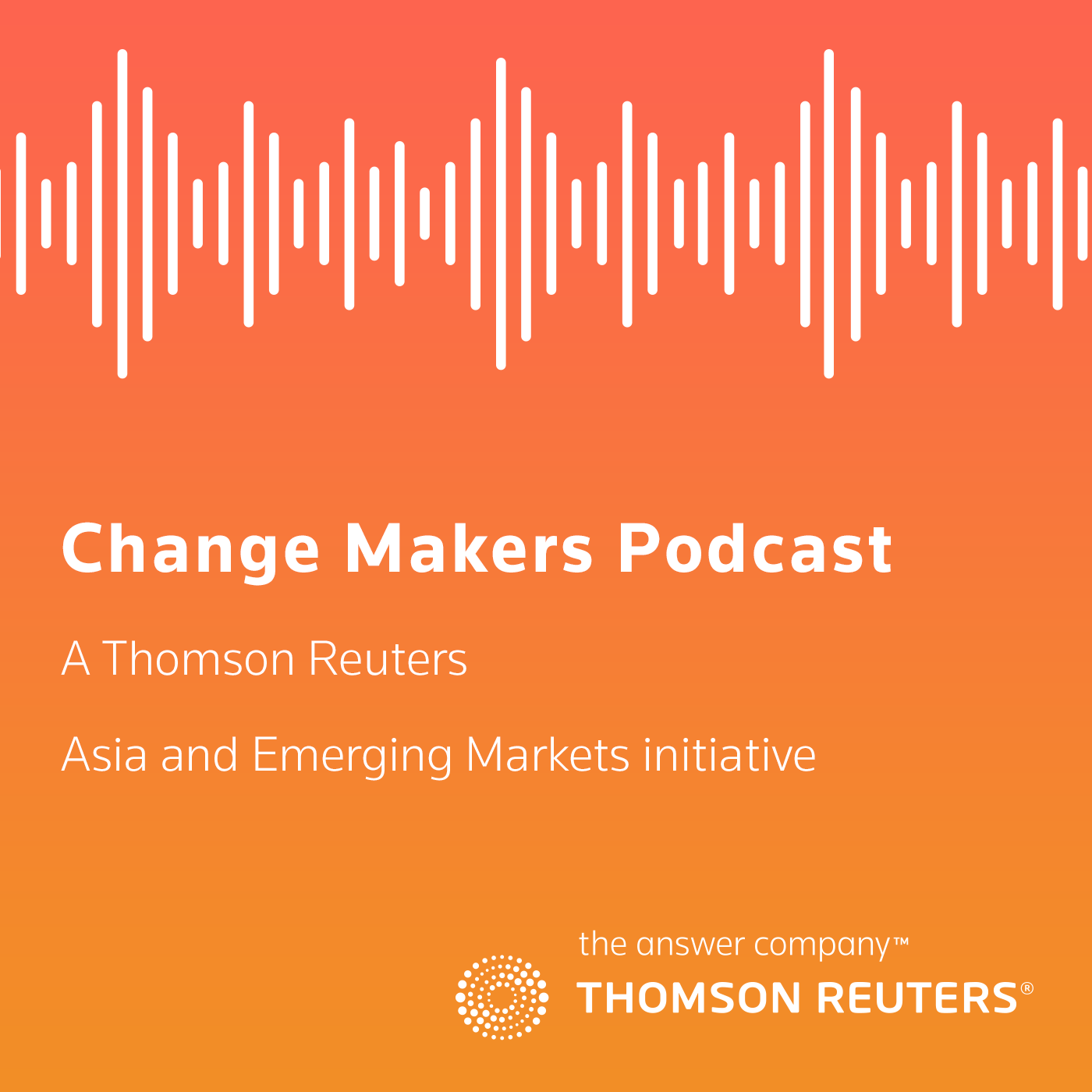 June marks the month of pride, honouring the 1969 Stonewall Uprising in Manhattan, a significant event which paved the way for the Gay Liberation Movement in the United States. To help celebrate Pride Month 2020, Thomson Reuters has dropped episode seven of the Change Makers Podcast, ‘Active Allyship’.

For a conversation on being an active ally in the workplace and encouraging other firms to follow suit, there was one person our podcast host could not look past. Catherine Roberts, Strategic Global Client Director, Thomson Reuters Asia and Emerging Markets, was pleased to invite an advocate of active allyship and colleague, Rob Head, Hong Kong-based Director of Proposition Core Law, Thomson Reuters, Asia & Emerging Markets to speak on the program.

Rob is a vocal supporter of D&I (diversity and inclusion) initiatives in the Asia region and has helped drive Thomson Reuters’ workplace equality index up during his time at the company. Not only does Rob regularly speak on panels to raise awareness for the LGBT+ community, he is the proud recipient of numerous industry awards. Last year, Rob was granted the 2019 Hong Kong LGBT+ Inclusion Champion Award and a 2019 OUTstanding LGBT+ Future Leader listing.

Outside of this, Rob has also hosted Stonewall’s Global Workplace Briefings Launch, authored the ‘Road to Gold’ Strategy driving achievement of Gold in Hong Kong’s LGBT+ Inclusion Index and continues to champion Hong Kong’s Gay & Lesbian Attorney’s Network, showcasing his drive to increase discourse and create change for LGBT+ people in Hong Kong and beyond. Rob doesn’t limit his allyship to those in LGBT+ communities, but instead looks to foster inclusivity of all individuals. For example:

“I often reference gender equality at the same time [as LGBT+ matters], because I think it's very important whenever you're trying to push one agenda in this space to make sure that people realise it's not at the expense of others, but it's to support all people at the same time.”

Continue reading for a recap of the episode, which looks at converting passive support into active allyship, particularly in the context of the Asia Pacific region’s legal profession.

Bringing your ‘whole self’ to work

To begin, Catherine asked Rob why D&I is important to him and the reason behind his unwavering support for it. Rob’s answer was holistic. For him, D&I functions to enable all people from everywhere, across Thomson Reuters as an organisation and its client base. This is regardless of your culture, nationality, race, age, gender, sexual orientation, or your physical ability.

“It’s about working in an organisation which has a culture that fosters an ability for everybody to bring their whole self to work, and something that fosters creativity through enabling people with different talents, different ideas, and different capabilities to bring everything that they have to the table,” added Rob.

But bringing your ‘whole self’ to work is easier said than done. As Rob explains, there are things that get in the way for LGBT+ individuals, that hinder their ability to feel comfortable in the workplace.

He urged listeners in the podcast to consider every person they meet as a blank slate. By this, Rob advised that you must enter into new conversations with an open mind, use inclusive language and don’t ever assume.

There’s a difference between supporting your colleagues behind the scenes, by being, what some may call ‘tolerant’ of the LGBT+ community, to ‘active allyship’. For Rob, the concept of tolerance has a connotation of tolerating something you do not approve of, which can hinder D&I progress. Instead, there are a number of steps employees can take to accept their industry peers for who they are and foster a safe workplace. As Rob explained:

“Some organisations are doing a really good job at implementing subtle but very positive signposting in the office. For example, some employees may have ally stickers on the back of their laptop or a pride flag on their desk. There are also events that happen where people will wear pink for ‘Pink Friday’ (which is an initiative that a friend of mine, Michael Lam, set up at Goldman Sachs during Pride Month 2019), to really spread the word across the industry in banking, finance and law, that they're welcoming cultures,’ he said.

Such signposts or small acts, Rob added, can make all the difference and prompt individuals to feel welcome and safe in their working environment.

Catherine agreed and chimed in with her personal experience on giving voice to those who may feel less inclined to do so.

“One leader I've worked with has always been very careful in meetings to make sure that everyone has a voice in the meeting. I think something like that as well can be really helpful just to show that you are wanting to listen to all the voices, and you're giving everyone an opportunity to speak,” she said.

Looking at Rob’s personal achievements in the D&I space, Catherine asked about areas he was particularly proud of. To this, Rob answered that while earning award titles are indeed something to be proud of, there’s also a human element to what he has achieved through being an active ally.

There was one poignant moment for Rob, after a ‘pink dot’ event in Hong Kong, where a colleague reached out to say how much his participation in the event meant to him. Because it can be hard for people to see the benefits of supporting D&I through events like this, such feedback was welcomed.

Most would have heard of the analogy, ‘six degrees of separation’. To describe the cultural environment in markets like Hong Kong and Singapore, Rob laid out a scenario for our podcast listeners using this concept, arguing it is more acute that some may realise.

“Imagine you are an LGBT+ individual working in a company or law firm in Hong Kong. You are not ‘out’ to your parents at home, but you want to be comfortable at work and be yourself and be fully authentic about who you are.

You don't know what to do, because in Hong Kong, it actually feels like there are two degrees of separation. If somebody at work knows somebody who knows your parents, it doesn't matter whether or not you foster the best culture in the organisation that is possible.”

"It's not necessary to see a physical result of somebody coming out. Do not measure success on the number of out people at work, measure it on the culture, measure it on your staff retention rates, measure it on how happy people are in the office, because those people may or may not feel comfortable to demonstrate publicly. That’s not a measure of how good you're doing. The measure is whether people are staying with you at work ,whether people are enjoying themselves."

“I would say one of the things that I would call one of my biggest successes is making sure that people in the organisation understand that kind of concept, and seeing their staff retention rates and seeing people do well at work regardless of their backgrounds,” said Rob.

Next frontier for D&I progression

Looking to the future of LGBT+ inclusivity in the workplace, Rob considers the small law space as an area for which conditions can be improved further.

“I think the next battleground for talent, if you will, is going to be taking LGBT+ inclusion to the smaller law firms and the smaller corporates who are trying to win talent. At the moment, there may be an acknowledgement of gender equality in some of these organisations, but not necessarily I would say success everywhere,” explained Rob.

Rob added that LGBT+ inclusion is not routinely an operational reality, which gives organisations like Thomson Reuters and large law firms to help educate leaders on the benefits of diversity and inclusion to attract top talent.

If you enjoyed this Change Makers Podcast episode, look no further than episode three, where Shelley Mulhern and Tim Pollard, both from Thomson Reuters, interviewed Rachael Wallbank, an *LGBTIQ and gender identity advocate in the legal profession.

*The terminology used here in this episode was as requested by the program’s guest.