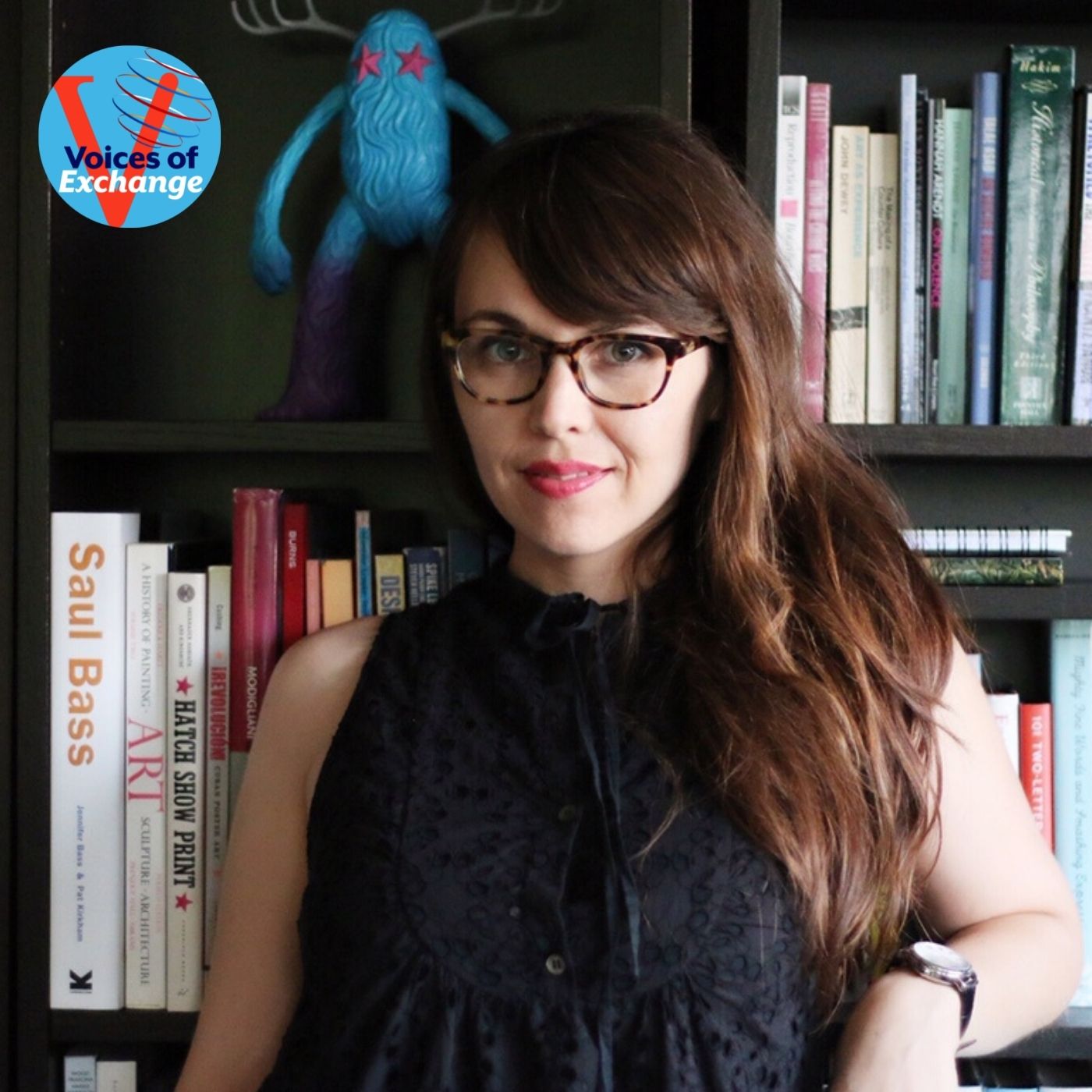 In the latest episode of Voices of Exchange, we learn how international exchange helped a “shy, nerdy kid” reconnect with a childhood friend and her passion for art. Travel with us from Buffalo to Chicago, Paris, Tbilisi, and New York City with Returned Peace Corps Specialist and illustrator Maria Krasinski.

My name is Maria Krasinski. I'm an artist and an illustrator. I'm also a freelance consultant on different nonprofit projects, mostly related to civic engagement, youth and different social sector issues. Currently I am in Buffalo, New York, my hometown, but I also spend a lot of time in New York City where a lot of my creative work is based.

When I went to the Peace Corps, it, I was mid-career. I was the vice-president of a, a nonprofit called world Chicago, which was actually a partner of the state department in ECA implementing exchange programs. And I loved it. It was probably my dream job that brought together my academic background in international relations and policy with my personal passions and interests for travel and cultural exchange and language learning. And I had been there for about five years and had kind of moved through all of our different programs, met hundreds of just super interesting, smart, driven people from all around the world. World Chicago is one of the largest local organizations that works with the state department on these programs. So we would have upwards of a thousand visitors every year from a hundred or more different countries. And so just being in Chicago, being able to meet all these folks from all around the world, just right in, in my town, which was pretty amazing.

But I think like, like everything, you, when you reach a goal, then you, you start to push your goals a little bit more and think what's next, what's next. And, you know, I sort of reached a point where I was thinking about what was next and actually got pretty inspired by a lot of the delegates who, who came to Chicago on these programs. And I was working a lot with different entrepreneurs at the time, and just seeing how they were just kind of leaving that safety net, that security and just striking out on their own. I was thinking about like, what might I do in that space?

And in a chance occurrence, I was speaking on an international careers panel with the diplomat and residents for the Midwest. I'm from the state department, some folks from the Peace Corps and then me and the Peace Corps representative talked about the two-year program, but also the Peace Corps response program, which I was not familiar with. And it is a shorter stint. It's not the full two years that you might think of. And it is geared more towards mid-career professionals who have some significant experience or volunteers who have already gone through the two-year experience. And it definitely piqued my interest. And so I went home and I looked it up and I shot off an application. And then a few months later got the call and it just seemed like the perfect alignment of still continuing to work in an international development exchange space, getting some on the ground experience abroad and kind of getting to live the life that I had been working with in Chicago with all the delegates coming there, but on the flip side.

So a friend of mine, Laurie came to visit me in Tbilisi a few months into my service. And she and I have been friends since we were nine years old. We, we lost contact for a little while. We went to different high schools and colleges, but then through the magic of social media, we reconnected as young adults and realized we were still really similar and had had a similar trajectory. I ended up in Chicago, she was in New York and Philly. And, you know, since then we have traveled a lot together. She's an art curator, I'm an arts writer has worked with different artists. So I was in creative fields in museums and exchanges. And so we had these really complimentary experiences and probably at least once a year, we would take a trip together somewhere in the world and go traveling and exploring because we had a similar interest, but also a similar way of moving through the world.

Again, like I'm, I'm sort of this observer and I just like to wander around and don't have an agenda, don't have a map, just kind of see what you might discover wandering through a city or a small town. And so when she came to visit me into Tbilisi, we were just chatting one night and I was sort of telling her about life in Georgia and its slower pace of life. And with that new-found free time, I, I had started drawing and painting more, again, something I had neglected for some time just being always busy at work.

And she says, What! I have no idea you drew!

And I was like, we have literally been friends for like 30 years, how did you not know that?

And I started showing her some of my sketches of Tbilisi just around my neighborhood, just again, from taking these meandering walks and just discovering the little nooks, not the big things you see on postcards and National Geographic, but here is this really cool raw iron gate design, or here's like this funny street that is winding and twisty, just the little things that kind of jumped out at me.

And she had this, this moment of being like, Oh, I've been looking for an illustrator for this book idea that I have, and this is exactly the style that I want for the book.

I actually started drawing the book in Tbilisi. I would be at my Peace Corps site. We do our projects and at night I would come home and start sketches and their process continued for a few more months after Peace Corps. I was, I was still traveling different parts of the world, drawing New York City streets while I was in Paris or Guatemala or some other location that was not New York. And in a way it was sort of, Lori's writing is very, it's fun, it's accessible and the best way, and it's, it's not dense art history sort of texts. It's really engaging and really paints a picture. And for me not being physically in New York for the production of most of this book, it, it helped me channel that that excitement to, of, of sitting in front of, you know, this, this building where, you know, Marc Chagall used to live.

And that was the same idea I would have in Tbilisi. You know, the more I learned about the history and the incredible writers and artists who are all around that city, and I got to wander through the Writers’ House of Georgia, you know, where all these storied authors and, and, you know, luminaries of the past lived, and this is beautiful Art Nouveau building. And just physically being in the spaces where, or these people were just gets you excited. And so that definitely got channeled into the production of the book before even being in New York.

this book would not have happened were I not living abroad for a multitude of reasons. One, I just, at that point in my life was not making space for, for art in any real way. I did creative projects here and there, or would help friends with things, but I just didn't make time for it. And it was kind of this neglected passion that I always, Oh, when I have more time, I'll, I'll paint again. When I have more time, I'll do this again. And, and being in a completely foreign environment that, you know, from the language to the food, to the people, everything was new. And that really opened my eyes again.

When I think back and reflect on where I started, even as a kid, I was this really shy, introverted kid who was scared to talk to anybody, even my own classmates to, to now, you know, having lived in, traveled to, you know, dozens of and, and had these very expansive experiences. It's sometimes I, I think about what, what advice, or what would I tell younger me, you know, kind of like, hang in there, it's going to be, be better. But, the thing that I come back to is, is opportunity.

There are several inflection points I can identify growing up that kind of led to where I am now. And they all centered around me saying yes to something that terrified me. And even as a kid going on this exchange program, when I was 15 with a school that was not my own, it wasn't even my own school. I was going with a bunch of strangers from the US to go be with a bunch of strangers in France. And I was terrified, but there was something in me that was like, you have to do this even at that age. And, and I think it was very much tied to my artistic interests because of course, France: Paris, Monet, Van Gogh, like this was the place to be. And so that, that love that passion, those interests that I had really, it was sort of overridden my shyness and extroversion and by saying yes to that, and then having a fantastic experience there, when I, you know, I came back to the States, then it was like, Oh, well, college is coming.

And then I ended up in Chicago and then from there just the, that ability to look at a seemingly scary situation or an unknown situation and, and be able to, to find the benefit in it or the, the less scary parts. It's a huge takeaway for me from, from these types of exchanges, whether from a, a high school cultural exchange to an ECA, very structured program. And so I would absolutely recommend and advise anyone considering that, to really think about all the ways you don't even know what will benefit you going into it.