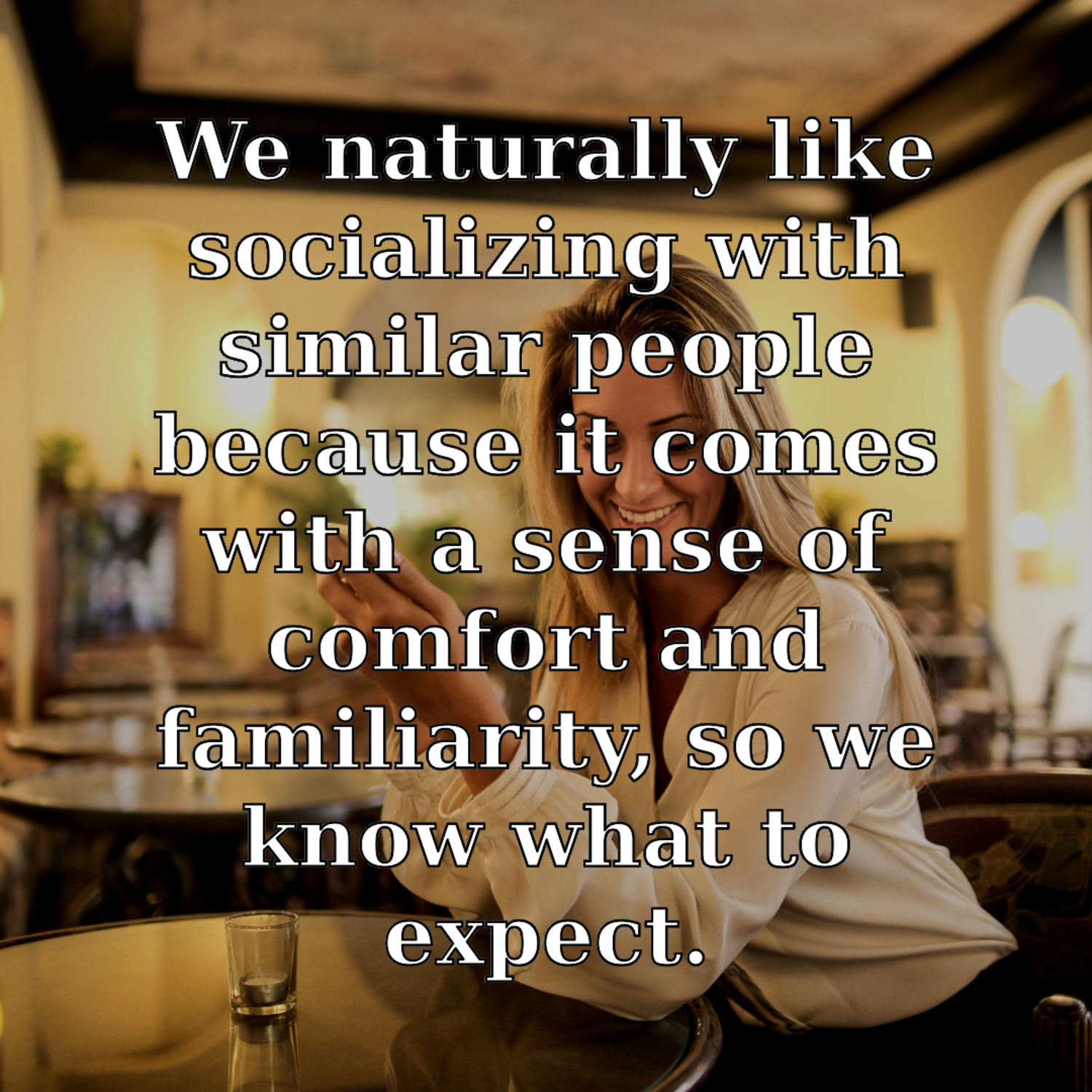 People want allies, emotional support, and friends who will go to bat for them and even defend them. No one likes to feel like they are surrounded by unreliable people, or even perpetual takers.

In the previous chapter, we mentioned the theory of in-group/out-group dynamics. This theory—as proven by experiments—points to the way people tend to group together due to feelings of belonging and sharing commonalities. This supports the fact that one of the easiest ways to connect with people is through traits you share with them. This may appear to be something obvious for first impressions and beginnings, but it actually influences entire relationships.

We naturally like socializing with similar people because it comes with a sense of comfort and familiarity, so we know what to expect. We feel safe. Not surprisingly, there have been countless studies over the years demonstrating the different ways in which we are more attracted to people whom we see as having similar personality traits to us.

The further apart you get on any spectrum, the harder it will be to find some middle ground that satisfies both sides. This is true for parties with opposing beliefs and attitudes, but it can also be true for people with vastly different personality traits. If you want to take an efficient and sustainable route to social success, you should focus a majority of your time interacting with people who have similar traits to yourself, because they will like and respect you more right off the bat.

Now let us take a look at how this thinking about similarities play out in terms of our romantic relationships.

Definitely, we have all heard the saying “opposites attract.” We especially encounter this when talking about relationships. However, evidence from psychological studies provides a solid contradiction to that notion. If you’re after more successful relationships, then finding a partner with similar characteristics to your own seems like the way to go.

And this makes plenty of sense—somebody who’s highly ambitious and career-oriented might judge a more relaxed person as being lazy, while the supposedly lazy person might wish that their partner would stress less and take more time to enjoy life. Neither partner is right or wrong, but the more they have to compromise in order to be together, the greater the likelihood of complications in their relationship.

Generally speaking, the more different you are from your partner, the more effort and communication will be required to have a successful relationship. If both partners are capable of consistently being open and working through differences, you can still have a rewarding and successful relationship where your dissimilarities are a benefit to one another. However, if you’re looking for a partner who’s your opposite so that you can “balance each other out,” you may want to rethink that strategy.

But what about non-romantic relationships? Can friends get along well if they have clashing personality traits and values?

In fact, the researchers showed that common attitudes and likability are directly related to each other as represented by a linear function, meaning that the more similar attitudes and beliefs you share with somebody, the more you will like them. Therefore, we are about two times more likely to like somebody with whom we agree on eight out of ten issues relative to somebody with whom we only agree on four out of ten.

Of course, this phenomenon isn’t just applicable to positive beliefs and attitudes. It also applies to sharing the things that you hate. Sharing hatred for the same thing can also bring people together because, as the saying goes, “the enemy of my enemy is my friend.”

Sports fanaticism provides a perfect example of this, as it’s extremely common to see fans of different teams come together to root against the reviled perennial champions of their given sport. And while building a new friendship through a common hate for a sports team is relatively harmless, unfortunately, this human tendency to unite over shared hatred can have more serious negative implications, as is often the case in political and religious conflicts.

The similarity and attraction theory doesn’t even end there, however. It’s actually been shown that having a similar name as somebody else also increases the probability that the other person will like you. That being the case, you can try to give yourself a nickname similar to your peers if you want to improve your likeability that extra little bit.

Ultimately, what all of these studies show is that the old adage “birds of a feather flock together” is a lot more accurate than “opposites attract” when it comes to human relationships. And you’ll likely find this to be the case if you reflect on your own social history and current relationships. It wouldn’t be surprising if some of your oldest and closest friends are the ones you have the most in common with, while some of those relationship failures and friends with whom you lost touch were less similar and therefore less compatible with you.