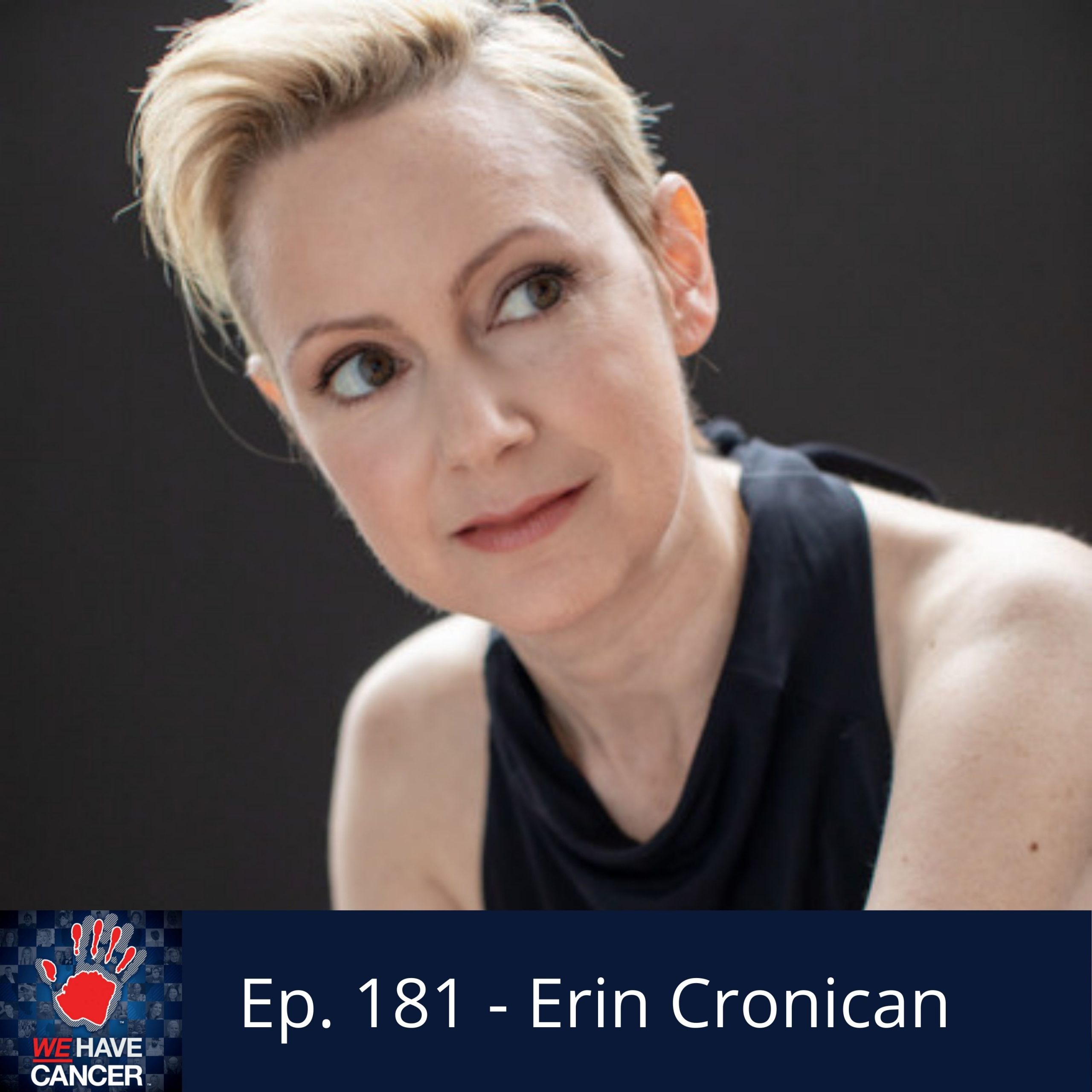 On this episode of WE Have Cancer, Lee is joined by actress and singer Erin Cronican to chat about her experience battling stage 4 metastatic breast cancer, continuing to perform and produce plays with her theater company, and blogging her entire journey since 1998. Erin speaks candidly about the roles of grief and gratitude in her life, and the comfort she finds in her work and daily routine.

Erin Cronican is an award-winning director, actor, and singer based in New York. She currently serves as Executive Artistic Director at The Seeing Place Theater in New York City. In 2018, she was diagnosed with stage 4 metastatic breast cancer, and has been undergoing chemotherapy, treatments, and scans ever since. She has been blogging since the 90’s and continues to document her life at her self-titled blog, “The Erin Cronicals,” where she provides transparency, awareness, and levity as she navigates her cancer journey.

Sometimes vulnerability and openness can be a double-edged sword. When Erin found out she had stage 4 breast cancer, she went through surgery during the midst of production with her theatre company.

Erin started chemotherapy in March 2019, and was scheduled to open a show in April 2019. She lost 40 pounds in 4 months due to a tumor leaning on her adrenal gland. She says when she started the show, she was not the energetic person people expected her to be. Critics found all kinds of reasons to call her the “weak link” of the show; they had no idea she had breast cancer.

Erin says, in a way, all cancer patients are actors to a certain extent. Everyone puts on a face around family members so they don’t worry as much, we downplay our feelings, friends tell us “Oh you look great!”

Erin started blogging back in the 1990’s while she was in college. She learned to code websites, and started writing a daily diary on her HTML website. She started her current blog when she moved to NYC in 2005. When she was diagnosed with stage 2 breast cancer in 2015, the blog morphed into being more medically driven.

Erin explains on her blog how she can be grieving the life that she used to have, and also be grateful for the life she has now. She wrote that two months before her mother’s death; and now she's also dealing with the grief of losing a parent and the collective grief of living through a pandemic. Sometimes in the cancer community there’s a toxic positivity aspect; it’s okay to make room for grief.

When her blood counts are too low and she can’t get chemo, Erin admits she's very sad. She considers it to be medicine and nothing toxic. Since she's been so stable recently, she's getting her scans every four months instead of every three. She says the "scanxiety" she feels is more a concern in having to change her regimen and less about worrying if the cancer comes back.

Leaving chemo, stable scans, or going off medications are all great, but they can come with extra worries about whether you’re doing the right thing. Erin shares the common fear among cancer patients introducing any change to their regimen: will I pay for this later?

Erin says her theater company is "very tenacious," they even created a program called Ripple For Change which pairs them with nonprofit organizations doing social justice work. They pick a play that is themed along the lines that pairs with that nonprofit's work, and the theater raises money and awareness for them through Zoom.

Erin and her partner have been together for nine years, they live together, they have two dogs together, and recently they got engaged. When Erin was diagnosed, she realized she wanted to be married before she died. In the middle of the pandemic, they decided to get married. Their small wedding will be in August 2021.

When Erin's fiance heard the news about her diagnosis, Erin says "it was difficult and scary." They went to therapy to figure out how to communicate through the fear. After her stage 4 diagnosis, there was a moment where they almost broke up. Erin shares how therapy helped them come back to each other.

Support the Child of the Month; Thiago - https://wehavecancershow.com/thiago