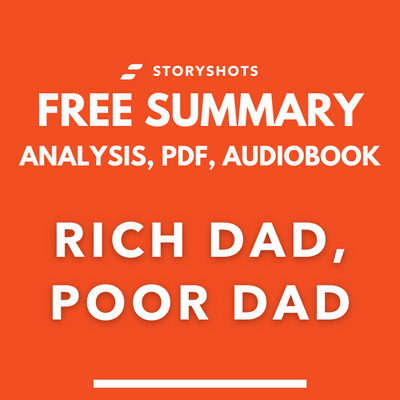 Life gets busy. Has Rich Dad Poor Dad been gathering dust on your bookshelf? Instead, pick up some of the key ideas now.

We’re scratching the surface here. If you don't already have the book, order it here or get the audiobook for free to learn the juicy details.

Robert Kiyosaki is an American businessman who founded Rich Global LLC and the Rich Dad Company. The latter focuses on private financial education through the mediums of books, videos, and speeches. He is also the author of over 26 books, including the best-seller Rich Dad Poor Dad (which sold over 41 million copies worldwide).

Rich Dad Poor Dad has been called the number one personal finance book of all time. Robert Kiyosaki illustrates the mindsets and beliefs that define those who become wealthy. He contrasts these mindsets with those who are poor. In this book, Robert’s example of a poor man was his dad, while the rich man was Robert’s financial mentor. Robert’s father was a genius, while his mentor didn’t even finish eighth grade. The only meaningful difference was their mindset.

StoryShot #1 - We All Need Financial Education

Financial literacy is extremely rare. The vast majority of students will leave school with zero financial skills. They will have developed knowledge that will help them pursue a specific profession but won’t know how to keep the money they make. They will have learned how to make some money but have no idea how to spend their money. Earning money only amplifies the cash flow pattern in your head. Financial literacy helps you control this cash flow pattern.

StoryShot #2 - The Difference Between the Rich and Poor

Robert starts the book by describing the main difference between the rich and the poor. Both poor and middle-class people work for their money. The rich have their money work for them.

The non-rich will always seek out the conventional methods of making money. They will study hard, get good grades, and then get a safe job with safe benefits. The reason most people choose this path is they are fearful of being without money. This desire to obtain a paycheck is then swiftly replaced with a desire to spend what they have worked for. Even when these individuals gain a bonus or raise at work, they will respond by spending more money. These people see joy as coming from money, but this joy is short-lived. So, they keep working to meet their desires and to squash their fears. Robert recommends you step back and forget about paychecks. Start thinking about innovation. Most people are stuck in the rat race and miss clear opportunities. If you are willing to step back, you can take opportunities and make far more money. Robert explains that investing your time into creating assets that generate money is far safer.

Robert highlights it is vital we learn it is easier to change ourselves than those around us. So, instead of blaming other people for not being rich, you have to accept that you are the problem. If you realize you’re the problem, you can change yourself, learn something, and grow wiser.

Learning will take a combination of energy, passion, and desire. That said, you will also need to harness anger positively. Robert describes anger as extremely important, as passion is merely a combination of love and anger. We must be directed by passion rather than fear.

StoryShot #4 - Use Accounting to Keep Your Money

Most people believe that making money is the most effective way of becoming rich. Although you need to earn money, it is more important to know how to keep your money. Wealth is not net worth. Wealth is the number of days you could survive if you stopped working today.

Accounting is not the most stimulating subject. That said, Robert believes it is the most important subject if you want to be rich. The first and most important lesson is you must understand the difference between an asset and a liability. Assets are the things that you want to be buying. Rich people are those that acquire assets, while poor people are those who acquire liabilities. An asset is something that puts money in your pocket. A liability is something that takes money out of your pocket. Many people view buying a house as buying an asset. But, there are many liabilities associated with a house: mortgage payments, insurance, property taxes, and substantial amounts of money stuck in a house. So, we should view a house as a liability. Identify assets that can be bought to cover the liabilities associated with a house.

StoryShot #5 - How Taxes Have Benefited the Rich

Today, the rich are playing a smarter game. They are legally avoiding taxes, while the middle-class is paying for most of the government’s spending. Historically, taxes were voted in by the poor and middle-class to only tax the rich. Instead of punishing the rich, taxes are punishing the poor and middle-class. Once the government got a taste of money, their appetite grew. The problem was that the government’s appetite for money was so great that taxes soon needed to be levied on the middle class. From there, it trickled down.

One crucial tax tool utilized by the rich is the 1031. The 1031 is also called the “like-kind” exchange. The like-kind exchange allows you to defer paying capital gains taxes on the sale of real estate. You can do this by using the proceeds of the sale to buy another piece of real estate. Additionally, corporations allow you to set up separate assets that generate income. The key here is that while an individual is taxed before expenses, a corporation is taxed after expenses. This simple rule means that you can legally write off vacations, car expenses, health club memberships, and restaurant meals. The poor are paying taxes and then spending. The rich are spending money and then paying taxes.

The rich have outsmarted the intellectuals. They have learned how to avoid tax legally. This is only possible because the rich are financially educated. Finance is not taught in schools, so the average intellectual doesn’t understand how the rich are avoiding tax. Rather than letting the government punish them, the rich react to tax laws that are put in place.

Here are the four fundamentals of financial literacy provided by Robert:

1. Accounting - The ability to read and understand financial statements.

2. Investing - The science of money making money; creativity combined with strategy and formulas.

StoryShot #6 - Don’t Confuse Your Profession With Your Business

Most people work for everyone else but themselves. They work first for the company owners, then for the government through taxes, and finally for the bank that owns their mortgage.

The poor and middle class spend most of their time and energy working for other people. The average American works five or six months out of the year just covering the taxes they pay to the government.

Don’t confuse your profession with your business, in other words, your asset column. The traditional school and job path is generally a necessary thing. The problem is you usually become what you study. Focus on your asset column rather than the asset column associated with your subject. You can keep your day job and put your money into assets. The assets you can utilize while working a job are stocks, bonds, mutual funds, rental properties, notes, and intellectual property royalties. Once a dollar is in your asset column, never take it out. When you want to buy a liability, first buy an asset that generates enough cash to cover it.